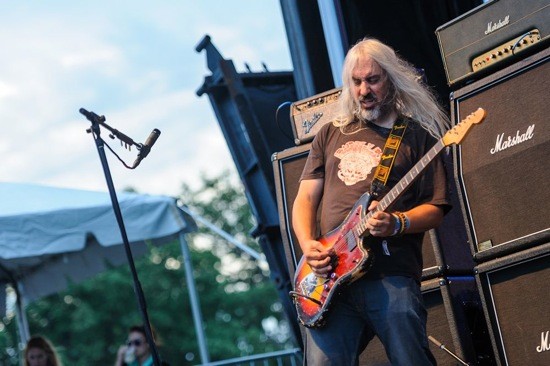 The LouFest crowd was also given a rare treat when the band played a cover of Deep Wound's "Training Ground." Deep Would was the high school band of guitarist J. Mascis and bassist Lou Barlow and the song sounded predictably punk. A joyous mini-pit broke out in front, with fans running in small circles and hug-slamming each other.

The band members, themselves, were in fine form. Murph's drumming was on point and he got to show off a little, especially during "Feel the Pain." J Mascis was appropriately shy and subtly funny, ducking out next to the speakers and then explaining that he had to look up the setlist on his iPhone. (And his silver unicorn hair is always a delight to see.) But the man of the day was Lou Barlow. It was LouFest, he pointed out. He killed during "Forget the Swan" and his bass provided clear and distinct thumping as he beamed and strangled the neck. He seemed to be having a great time and after his show he could even be seen standing on stage and sporting a bemused smile as he looked across the baseball fields and watched the crowd groove to Girl Talk.