DJ Alexis Tucci: ‘If There's a Crowd Giving Me Energy, I Can Go Forever’ 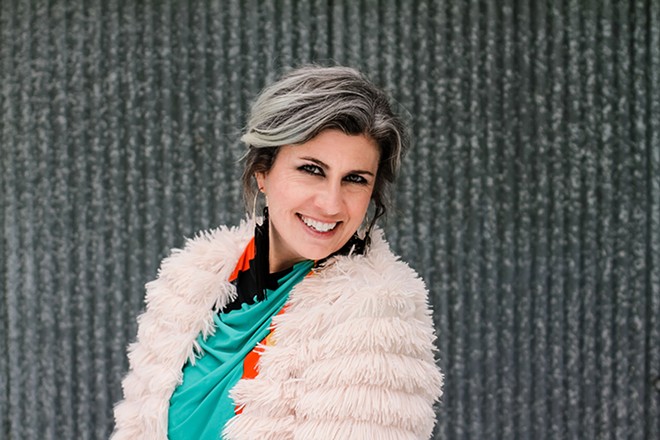 Alexis Tucci's approach to music can't fit neatly in the two-letter anagram — DJ — that usually precedes her. She considers herself a house music DJ first and foremost, and in conversation she'll rattle off several sub-genres of the form the same way baseball announcers breezily call a double play.

Her DJ career first took flight in the 1990s as a member of the HotHouse sessions, which featured musicians improvising over her record spinning. Since then Tucci has embraced solo DJ sets with vigor, though her latest band, the Disco Techs, again fuses lives players (including members of the Funky Butt Brass Band and the Brothers Lazaroff) alongside her spinning.

As a promoter and event planner, Tucci heads up Nightchaser, a company that specializes in immersive, after-hour parties. But whether she is in the DJ booth or behind the scenes, the same goal fuels her.

"If there's a crowd that's giving me energy, I can go forever," she says.

Tucci's party-throwing bona fides stretch back to the days of after-hours raves held in abandoned warehouses. She has always prided herself on her longevity behind the decks.

"Back in the rave days, it was epic if a big-name DJ went for more than an hour," she recalls with a laugh. "When I started, I was used to playing super-long sets. I like so much music and there's so much in the songs I play."

Just recently, Tucci had a chance to put that commitment to the test; she was a featured artist at AfrikaBurn, a South African desert party inspired by the annual Burning Man festival (of which Tucci is a dedicated attendee). She DJ'd a ten-hour set, with only an hour's break in the middle.

Asked if there are similarities between throwing a great event and crafting a non-stop house music set, Tucci brings it back to the audience.

"I need to feel like the crowd — their positive energy — is a part of the design of the event," she says. "By being present, they are a crucial part of the event. Throwing the parties, I want people to have a completely psychedelic, submersive experience whether they are sober or not. It all works hand in hand."

Those epic DJ sets have been a salve to Tucci in the past few months following the death of her father, restaurateur, philanthropist and civic booster J. Kim Tucci.

"Everything I am doing, every single ounce, is attributed to his devotion as a father to me," she says. "His integrity and work ethic was the lesson he taught me. If you are passionate about what you do, you are driven by your own internal fire." And her father's love for St. Louis was passed down as well.

"Civically, there is no better place than St. Louis," Tucci says. "I've played all over the world, and I still can't wait to come home to St. Louis — I'm never bored here and I don't know how anyone else could be. That love of the city has definitely rubbed off on me."