DJ Needles On Growing Up With Vinyl And His Gold Records

On the verge of the release of the RFT "Best of St. Louis" 2011 issue, Last Collector Standing decided to meet with last year's winner for "Best Club DJ," DJ Needles, to discuss what it takes to make a great DJ. Of course, vinyl was involved. Needles (a.k.a. Nodzill, a.k.a. James Gate) is the son of legendary St. Louis radio DJ James Gates Sr. Over the last decade, however, DJ Needles has made quite a name for himself around town on his own accord. We met at his Dogtown apartment, filled to the ceiling with records, where Needles reflected about his career as a DJ: A career that has earned him two honorary gold records and the opportunity to perform with Digable Planets' Ladybug Mecca.

Last Collector Standing: For over a decade you've consistently been praised as one of the best Hip-Hop & soul DJs in St. Louis. In fact, the RFT awarded you Best Club DJ in 2010. What do you think it takes to make a great DJ?

DJ Needles: I believe it takes unwavering originality, to put it bluntly. You need to be able to identify yourself through your music. An adequate DJ is one that plays anything any audience asks him to. There are places for that, but a great DJ... You identify a good DJ the same way you identify a great artist, just like you would say, "This band is great. This singer is great. This rapper is great." All the time it has to do with their level of originality and authenticity. How they approach their craft and what their presentation is like, what goes into what it is they do. So [their] identity has to be found, and it has to be nurtured and put on display at all times.

You have to promote what you love. Why would you promote stuff you don't like, and then still try to consider yourself a good DJ? I come from the understanding of DJs like Kool Herc, [Afrika] Bambaataa, Flash, all of them cats back in the early-to-mid '70s. They took DJing seriously. Obviously, they wanted the party to pop. You always want the party to pop, but you don't want it to pop sacrificing your identity. If something is not your style, don't play it.

I think what's gotten messed up is that the roles have been reversed. The DJ used to dictate what the party was going to listen to... They knew what was great and if you weren't down with it something was wrong with you, not me. That's basically what I live by.

When did you feel you found your identity as a DJ?

I came into it without any type of aspirations of being famous or being regarded as the best or anything like that. I came into it through a love of underground hip-hop, classic hip-hop, old-school hip-hop. Whatever you want to call it: non-pop hip-hop.

I kind of already had that identity set. Stay true to what it was I was into and play that. A lot of people will tell you [that] you have to change your style to get the audience to like you. I never bought into that. I was always like, "I like it. I know I'm not the only one who likes it. I'm going to play it until I find the crowd that likes it."

When I got my first break to play in front of a crowd it was down at the Red Sea. My man Rich Money was DJing. He let me get on while he took a break. I played Diamond D. I remember that was definitely one of the records that I played, Diamond D "Best-Kept Secret." That's one of my favorite hip-hop songs ever. That was sometime in '98. It was clear from that point that that was my identity, not necessarily hip-hop, but music that is true to myself.

How did you first start collecting music?

In [my family's] house there was always vinyl. Here you see this shelf [points to record shelf in his living room]. Imagine four more shelves full of vinyl. That was my dad's collection. He had tons of vinyl. It was always in the house from as far back as I can remember. I was always familiar with records.

I think the first record I owned was Thriller by Michael Jackson. I remember bringing that to my grade school. That might had been my first record where I was like, "This is mine." I remember "Double Dutch Bus" [by] Frankie Smith, I think I had that 45.

Fast-forward to about '94 or '95, I started seeing my dad receiving promo copies of music that I was listening to on the radio, hip-hop music. He would give them to me because he knew I liked hip-hop. He'd be giving me promotional copies of this stuff and I didn't know what to do with it because we didn't have a working record player back then. I still kept them. I don't know why, but I guess in the back of my mind I was like, "Someday I'm going to get a record player, and I'll have this stuff." Here's the funny part though; that was around the time I started discovering the Loop. I would go up there and I'm broke. I see that they paid money for used vinyl. "Man, I've got a goldmine!" My dad had long since been like, "You can have all this [vinyl]. I don't use them much anymore, so you can have them."

I figure in my mind, "Well, my dad gave me all that vinyl. We don't have a record player. I don't really know the records. So why not, I'll just take a few records at a time and sell them." I would take maybe 40 pieces, maybe even 50 pieces and they would give me like 30 bucks. I was a teenager so I was like, "I've got 30 bucks!" Little did I know, my dad being an on-air radio personality since '68, he was getting free records from all of these labels from '68 on up. These are killer records. I didn't know what I was selling.

Those radio promotional records can be worth a lot of money because they are so rare.

Dude, that's always something I think back to and say, "I can't believe I was so naïve and so stupid to sell this stuff." That were a few times I did that. Luckily, I stopped myself before I could sell anymore and I realized what was back there. A lot of what you see here is a lot of what I brought from my Mom's house when I moved out. I started listening to the stuff that was there and it was virtually a goldmine of vinyl. I didn't really start buying records, hip-hop or otherwise, until probably '97. 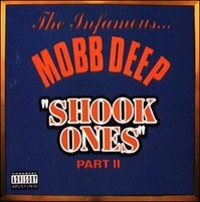 Do you remember what the first record you decided to buy on your own was?