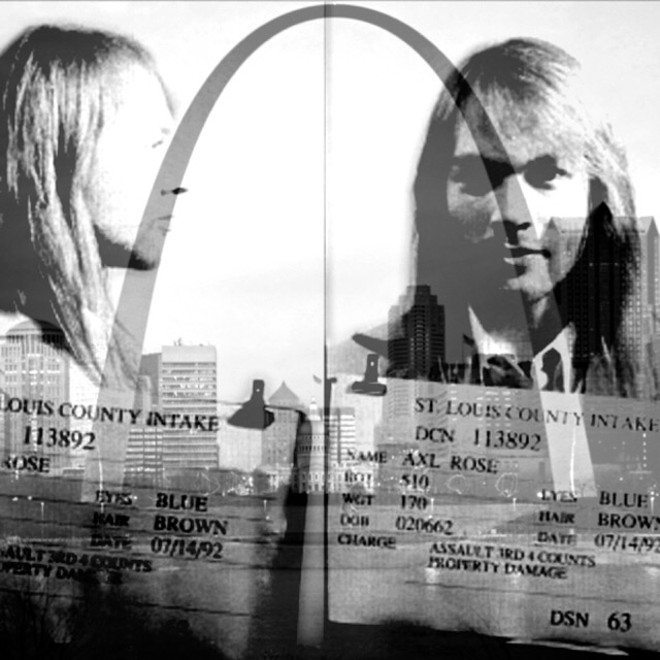 It was 25 years ago this summer that Axl Rose sparked the infamous “Riverport Riot” and just a few days ago Guns N’ Roses announced that it will return to St. Louis for the first time since the incident. (Location and date of concert still unknown.)

The Riot story goes like this: On July 2, 1991, Guns N’ Roses came to St. Louis to play one of the first shows at a brand new outdoor shed venue called Riverport. (Now known as Hollywood Casino Amphitheatre.) During the show, Rose spotted a fan up front taking photos, he then flipped his shit and jumped into the crowd in an attempt to wail on the offender, a motorcycle enthusiast named Stump. After being caught on the big screen going berserk on his fans and lashing out at security, Rose was pulled out of the mayhem, said “Well, thanks for the lame-ass security, I’m going home” into the microphone, and then threw the mic down and exited the stage. The rest of the band followed.


The fans in attendance weren't about to tolerate Rose’s antics (or the show being cut short) and they promptly rioted: ripping up the seats, lighting small fires, starting fights, tearing down signage and generally trashing the joint. The band fled the Riverport area and were driven across state lines into Illinois to avoid arrest.

Rose’s bratty behavior was already well-documented by this point. His fragile ego always came across as insecurity wrapped in peacocking machismo, but on this night he seemed extra volatile. Dude was wearing Mormon underwear and a hideous gorilla jacket that would make even Dian Fossey cover her eyes but he still decided that he was going to jump into the audience and try to be the alpha male.

Because his aggro, immature outbursts were commonplace, this particular tantrum couldn’t have been entirely unexpected, but the reaction of the crowd was immediately beyond the capabilities of Riverport security. The police called in every available officer and the rioting crowd was mercilessly escorted to the exits. The riot resulted in sixteen arrests, 60 injuries and a reported $200,000 in damage to the amphitheatre.

It took a year for Rose to finally be arrested on an outstanding warrant when he landed back in New York after a European tour. He was released on $100,000 bail but soon faced a St. Louis judge on multiple accusations of assault and a property damage charge. In the end Rose was sentenced to two years of probation and ordered to pay $50,000 to St. Louis-area charities.

Click over to the Missouri state database, CaseNet, to see all twenty court cases eventually filed against Rose that stemmed from the incident, most of which were personal injury claims. (Search FIRST NAME: W - MIDDLE NAME: Axl - LAST NAME: Rose)
But before he even went to trial in St. Louis, Rose had already declared his own personal war on the city. His vendetta was long-running, too. Guns N’ Roses’ Use Your Illusion I & Use Your Illusion II were released a few months after the incident and included “FUCK YOU, ST. LOUIS!” in the liner notes. Rose was also seen on stage wearing a “ST. LOUIS SUCKS” t-shirt and he trashed the city at every opportunity. (Riverport is technically located outside of St. Louis in Maryland Heights, but a shirt that reads “MARYLAND HEIGHTS, MO SUCKS” wouldn’t have been nearly as flashy.) He also wore a St. Louis Cardinals hat for approximately one second in the “Don’t Cry” video. (At the 1:11 mark.) He must’ve wanted us to know that he was thinking of us because it’s not like he wore hats and bandanas in an attempt to hide his thinning hairline or anything. Nope, not at all.

Liner notes from Use Your Illusion I, screen capture from Don't Cry, two live video screengrabs in "St. Louis Sucks" shirt
Maybe Rose has since softened his stance on St. Louis after working with our native son, wizard guitarist Richard Fortus. Fortus became a member of GNR in 2001 and has decades of high-level professional experience under his studded belt. (He founded Love Spit Love and played with Thin Lizzy, to say the least.) He’s smart and talented and any city would be proud to have him as its ambassador. Fortus recently gave an interview where he explained that he missed the 1991 riot entirely. On the night of the riot, he said, he was playing across town at Kennedy’s. (For local rock fans of a certain age, this statement will read as pure, undeniable St. Louis street cred.)

So where and when will this new Guns N’ Roses concert happen? We have no official information on that yet, but we’re guessing that they’re implying that the show will happen sometime this summer. But making plans is not GNR's strongest trait— you know how it went down with Chinese Democracy. And assuming that “Riverport” still has a ban on Rose (and doesn’t want a reenactment of 1991 on its hands), GNR would have to find another large venue to play.

When discussing this dilemma with a friend, he offered what appears to be a very reasonable venue prediction for the upcoming event. Keep in mind this is entirely conjecture, but he pointed out that current Cardinals owner Bill DeWitt recently mentioned on a podcast that in addition to welcoming the much anticipated NHL Winter Classic hockey game, that he was also planning on hosting an upcoming concert at Busch Stadium downtown.

In the last few minutes of The Ryan Kelly Morning After podcast Episode 37 (titled “Segment 1 - Show Open 03/10/16”), DeWitt says, “We’ve had a couple of false starts on concerts, so I don’t want to jinx it, so I’ll leave it at that. But we’re trying to get one good one this summer and then one or two big ones next summer.”

Could it be Guns N’ Roses? Absolutely. Not many other major touring bands could hope to even partially fill a venue that holds more than 46,000 attendees. Furthermore, if this show is at Busch it would almost surely have to take place during the All Star break between July 8 and July 12. This location might also be good insurance against another riot— most St. Louisans would think twice before damaging the Cardinals' nest.

What’s a St. Louis rock fan to do? We have ambivalent feelings about Guns N’ Roses. We remember what happened on that hot summer night long ago, but years of prolonged exposure to KSHE has weakened our resolve. We, as a city, have always liked to party, but we still have very little tolerance for ego trip bullshit.

So to Axl we say this: Remember what happened the last time you tried to act a fool here? We don’t play that mess so don’t even try it again. We’re primed and ready. If you try to step to us on our own territory we’ll turn on you even faster than last time. Behave yourself because we promise you that this, sir, is the jungle.

Hey Axl, we made you a new t-shirt
Missed the action? Check out a short two-part documentary on the Riverport Riot below. It includes an interview with Mr. Stump and a hilarious "only in St. Louis" story about Izzy Stradlin's lost amplifier from witness Sebastian Bach of Skid Row.