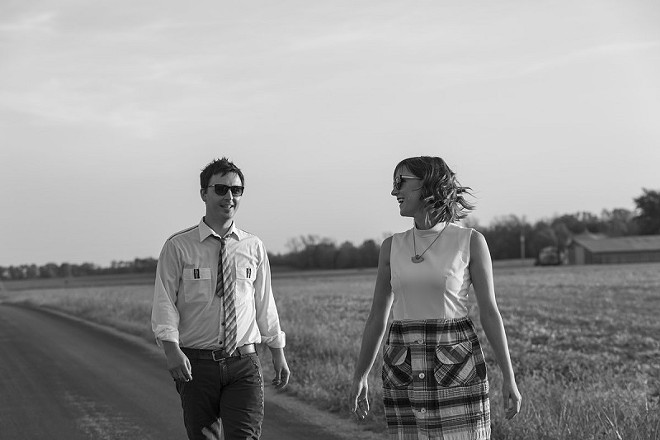 Dan Mehrmann and Kara Baldus, a.k.a. Dropkick the Robot

The first song that Dan Mehrmann and Kara Baldus ever wrote together won them international acclaim: Their song "Missed Out" took the grand prize in the electronic category of the John Lennon Songwriting Contest in 2013. For Mehrmann especially, the award must have felt like validation for his years leading Dropkick the Robot — through four releases and many incarnations — with a pronounced love for Britpop and classic songcraft (even going so far as to have 2010's Two Feet mastered at Abbey Road Studios). Baldus, a more recent addition to the line-up, calls the award "really encouraging," so much so that the pair sought the advice and influence of a few industry contacts to help push their band toward a national audience.

That was more than two years ago.

You probably know where this story is heading. The industry types, well-intentioned as they may have been, weren't able to make hay for Dropkick the Robot. The six songs the band shopped, re-recorded and now collected as the Gadgets EP, were released online last week.

Mehrmann says that he and Baldus sought feedback owing, in part, to being outside the normal music industry channels. "We feel a little green in the industry," he says. "We want to do this with our lives — to tour and have everyone hear this music. The people we were talking with had some major connections and painted a very pretty picture for us, but it was like a carrot dangling right in front of our face."

The duo is hardly green when it comes to the actual nuts and bolts of writing, arranging and recording music. Both are adjunct professors — Baldus at Washington University, where she has taught jazz, pop and classical piano for the past six years, and Mehrmann at Southwestern Illinois College, where he's finishing his thirteenth year in the music technology program. Mehrmann also runs Jettison Studios out of the couple's home in rural Illinois — he's worked on records by Beth Bombara, Adult Fur and Mikey Wehling's new project, Vandeventer. You would have a hard time finding two people with more technical, theoretical and practical experience.

"We wanted to push our songs and get them out to a bigger market, and that's where some of our some doubt came in," explains Mehrmann. "We were trying to be the student in that situation — we respect those people, but it was a learning opportunity for us. If those guys can't get the music to a larger audience, then we just have to do it."

Now operating as a duo, Mehrmann and Baldus have increased the presence of electronics on these tracks — most are driven by drum-machine patterns and are christened with glossy synthesizer and muscular guitar. It's pop music that isn't afraid to be pretty or sincere or radio-friendly. Opening track "Good Together" doesn't even make you wait for the chorus as Baldus promises devotion over a bed of modulating synth washes and slippery low-end.

Baldus, whose day job puts her in contact with complex chord structures and graduate-level music theory, takes a more direct approach in her own compositions. "What trumps everything for me is melody — being able to have that soar and be relatable to everyone," she says.

Likewise, Mehrmann doesn't shy away from pop structure in his songs. "I definitely am of the school of that it does need structure," he says. "I approach it from a melodic standpoint and from an arc standpoint — a standard build of a pop tune. I want familiarity but something that pops out — a lyric or a melodic hook."

"Fall," the lead single from Gadgets, illustrates Dropkick the Robot's classicist sense of composition and its willingness to pervert the form. Baldus takes the lead vocals, and her synth work gives a burbling underpinning while Mehrmann's guitar offers power chords, slinky leads and a brief funk breakdown.

Both performers are precise and occasionally passionate singers, though at times their loyalty to the song — its structure or melodic uplift — comes at the expense of personality. When the duo strips back some of the finery, as on the EP-closing ballad "Lately," that connection comes through over acoustic guitar and piano, it feels like the emotional stakes are real.

Who knows what label reps in New York on LA or Nashville would make of two thirty-somethings singing sincere, unadorned pop songs? At this point, it's clear that the principals in Dropkick the Robot don't give it a second thought.

Mehrmann says he approached recording these songs by "going back to them and ignoring what everyone else said. We need to find how to make them speak in our voice.'

"It was a good road to have outside opinions and have an open mind to it," says Baldus. "But at the end of the day, we had to say what resonated with us."