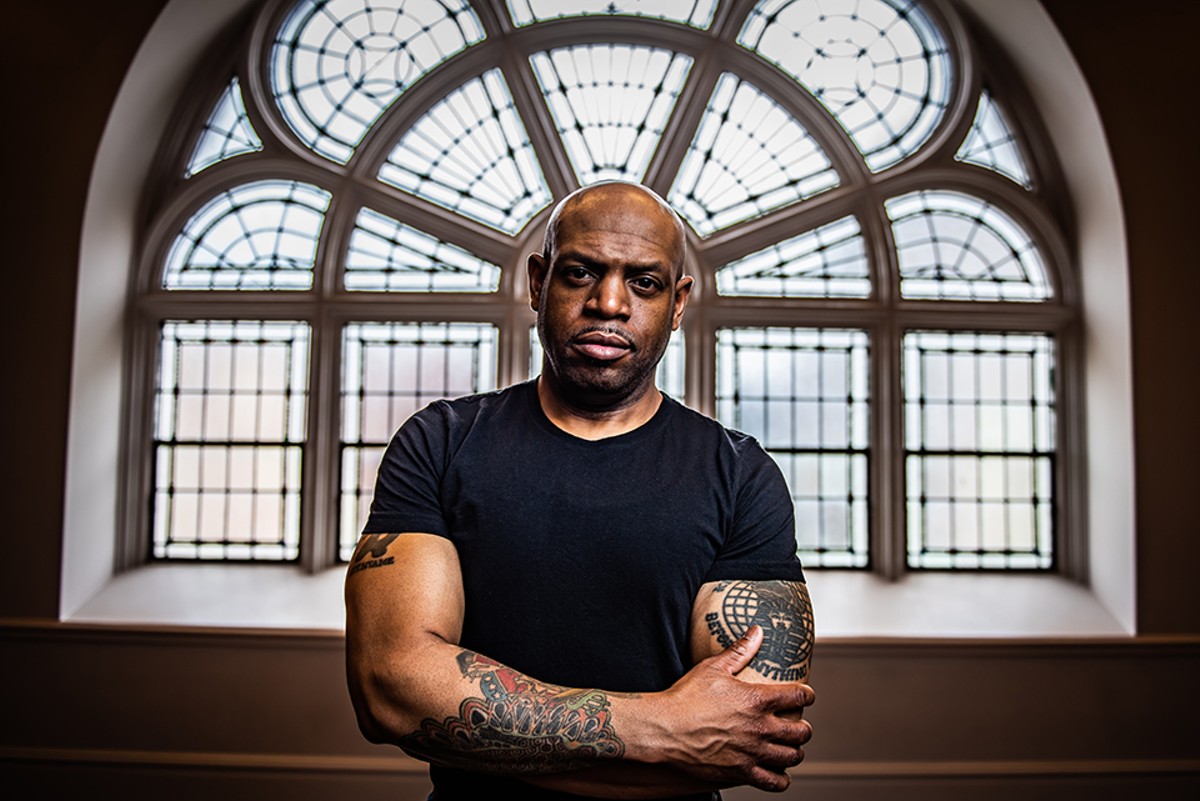 Grover Stewart, who plays drums with several local acts, says it took the encouragement of his peers to finally try his hand at singing. PHILIP HAMER

Grover Stewart Jr. rolls into a south-city coffee shop a little later than expected on a Friday afternoon, all smiles and apologies. An in-demand drummer around town, Stewart's day job kept him a little later than usual; since he works in his company's human resources department, Stewart is often tasked with quelling the interpersonal squabbles and institutional fumbles that can plague the workplace.

Many nine-to-five types have a dim view of HR — all those rules and trainings and memos! — but Stewart, who transitioned six years ago from finance to human resources, thrives in the role; he's even back in school part time to burnish his credentials.

"I'm a people person," he explains. "In HR, besides learning the policies, procedures, acts and laws, you gotta love people, because in human resources, you are a servant. I genuinely give a damn about people."

Stewart carries that energy from his day job to his many gigs around town, where he provides the rhythmic pulse for the Brothers Lazaroff, the Mo E All-Stars, Press Play and more. And in music, where egos get bruised easily, Stewart finds that he is oftentimes both the beat-keeper and the cheerleader from behind the kit. "Conflict happens in bands; friction happens in bands," Stewart says. "We all have not-so-great days — it happens. How do we coach each other along and inspire each other?

"Those transferable skills translate to both worlds," he says of his HR background. "Being the drummer, you're the driving force, and everyone is looking to you."

Stewart credits his positive, peace-keeping attitude as well as his omnivorous musical taste to his upbringing in Kirkwood, where he was the youngest in a household of ten kids.

"My mom set the foundation," Stewart says. "She was a classically trained pianist, but she was also a supreme vocalist. In my household it was music all day, every day." Being the baby of family, with nine older siblings, Grover acted as a sponge and soaked it all up: gospel and big band swing from his mother, British pop and prog from an older sister and an education in KSHE Klassics — Led Zeppelin, Journey, Eddie Money — from his older brother.

His mother was the music director at church, so a young Grover gritted his teeth through piano lessons with his mom. When his older brother abandoned his drum kit to take up the organ, Stewart slid onto the stool and never left. "It was over with from there," he laughs.

"As a kid, I'd spend countless hours at Kirkwood library, listening to records, taking them home and practicing them," he recalls. "That's how I discovered Steely Dan, discovered Toto. 'Man, I can learn a lot from this!' But trying to play like Jeff Porcoro? Forget it."

But as accomplished as Stewart is behind the kit, in the last year he has begun releasing electro-soul singles under his own name, featuring his lead vocals and compositions.

"I vocalize what I hear in my head, and I'll sing it out onto a vocal recorder on my phone," Stewart says of his process. He relies on his once-hated piano lessons to transfer some of his instrumentation to the keyboard, but often he relies on a coterie of friends he's made in 25 years of playing around town to flesh out the songs.

His first two songs were produced by Andrew Stephen, whose jazz chops and house-music know-how were a perfect fit for collaboration with Stewart.

"It's been a pleasure working with Andrew," Stewart says. "He's much younger than us, but he's got a wealth of knowledge."

Stewart has been releasing one song every few months, posting them on his Bandcamp page as soon as they're ready. "The first song I've released is 'I've Grown,' and it basically speaks for itself," he says. "I've grown, I've matured and developed through my life's situations and experiences. This is what allowed me to develop into the person that I am today."

Stewart says that plenty of people were surprised that the well-regarded drummer had been moonlighting as a singer, but many of his former bandmates were hip to his talents and encouraged him to step to the front of the stage.

"I was playing in Ralph Butler's band, and I was 25 years old," Stewart says of the long-running band leader. "Ralph would hear me sing and say, 'You've gotta sing in my band.' And I said, 'No, I just wanna play drums.' Ralph was a mentor and big brother to me, and he said, 'You gotta break your fear, man.'"

Encouragement from his bandmates helped push Stewart toward the microphone. "All these people around me were saying, 'You've got a voice: Use it,'" Stewart recalls. "Last year I said, 'OK, I'm gonna break the fear. I'm gonna release this; I don't care what anyone thinks, I'm just gonna go for it.'"

Stewart can still be found behind the drum kit more often than not, but he has no plans of stopping this new musical outlet.

"Once you start doing something, it becomes really addictive," he says.