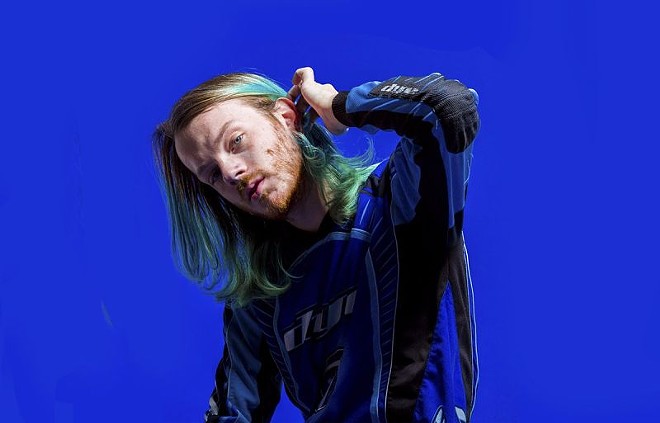 Dylan Brady, a locally bred musician, songwriter and producer, used to make entrancing, distended hip-hop records from his apartment in Webster Groves. But when reached by phone in Los Angeles, the 23-year-old Glendale native is settling into life on the West Coast, having secured a place of his own after a few months of couch surfing. He's keeping busy as a producer and songwriter — he produced the forthcoming solo album from Jesse Rutherford, lead singer of the Neighbourhood — and building off his work with St. Louis artists.

Closest to his heart is the Hella collective, a St. Louis-based group of musicians that includes Ravenna Golden, Calvin Lewis and Toni Saputo, with Brady serving as sonic consigliere between the artists and their audience on Soundcloud. Many of those tracks bear Brady's distinct thumbprint — glacial beats, sparse but apocalyptic instrumentation, and heavily processed vocals.

"It varies for each artist," Brady says of his approach as a collaborator, "but I try to not really force my sound onto other people but help figure out what their sound would be, and help them see their vision out."

Alongside his production work, Brady is an artist in his own right — 2015's All I Ever Wanted was a deep dive into cavernous hip-hop that didn't let heavy AutoTune usage completely mask its emotional core — and his latest EP, Dog Show (recorded when he still lived in St. Louis), shows an artist in a process of evolution. 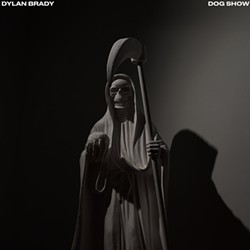 Brady seeks to continue moving away from what he calls "soft-synth, plucky, reverb-y things" — textural elements that have been his calling card as both producer and artist. "I feel like I've done that, and I don't need to strive to that sound anymore. I want to make a different thing every project," he says.

The five brief tracks on Dog Show certainly show a pivot in direction — where his last record operated on slow-drip hip-hop vibes and narcotized beats, this self-recorded EP channels a raw, punky energy. Having learned the guitar in the past few years, Brady throws himself into the hyper-color chaos of nail-bomb pop.

"I was just listening to old pop-punk and emo shit that I used to love in middle school — I always wanted to make stuff like that," says Brady. "I don't really know what I'm doing on guitar, so that makes it exciting. I'm just messing around until I find something I like."

His vocals remain coated in a thick glaze of AutoTune, as he drags and drops his voice along the digital stair-steps of that software. In keeping with the shift in genres, he also douses his delivery in near-indecipherable distortion. But while vocal obfuscation is a hallmark of Brady's own solo output and much of his work as a producer, his collaboration with local vocalist Bloom is noteworthy for how it lets her voice — a sensitive, nuanced instrument in its own right — lay unadorned at the center of her songs.

Bloom is the aegis of 26-year-old Kalyn McNeil, and her recent album [SIN]SES showcases the depths of her vocal expressions within the context of moody, atmospheric hip-hop. 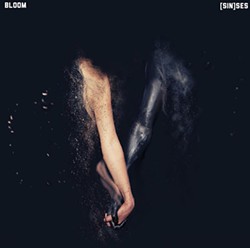 "I grew up in a musical family," recalls McNeil. "My mom had her own band singing jazz in St. Louis, and my grandmother was a music teacher and my grandfather was a saxophonist. I grew into jazz — It wasn't something I loved as a kid. All of my music is rooted in jazz — my dips and my inflections."

McNeil credits sitting in during her mother's jazz band rehearsal for instilling a love of harmony. Still, it was a combination of software and solitude that taught her the power of her own voice."Harmony became something that was really beautiful and hard to understand," McNeil says. "I got a MacBook and would record on GarageBand. I wrote these songs with no instrumental — I created all these cool harmonies and backgrounds. That's how I write all my songs."

McNeil's songwriting process informs all of Brady's production on [SIN]SES; her songs are more likely to float in the ether than be locked in a rhythmic grid or be pinned to a chord structure. The single "Raindrops" has brought the most listeners to Bloom's music — it's racked up over 80,000 plays on Soundcloud — and the track's subtlety and use of ambient textures give ample room for McNeil's full-bodied vocalizations.

"We literally did them in two hours," McNeil says of her first two singles, "XCHXO!" and "Raindrops." Both were largely completed during her first meeting with Brady, she says. "He had to go back and tweak them a little bit, but we didn't really touch the songs after that."

While Brady is settling into life in Los Angeles and hopes to have some of the Hella crew join him, McNeil is planning on staying in St. Louis — though she hopes she and Brady can continue working together.

"I hope to do more music with him, because I can't imagine making something that beautiful with anyone else."

Stream Dog Show and [SIN]SES below: