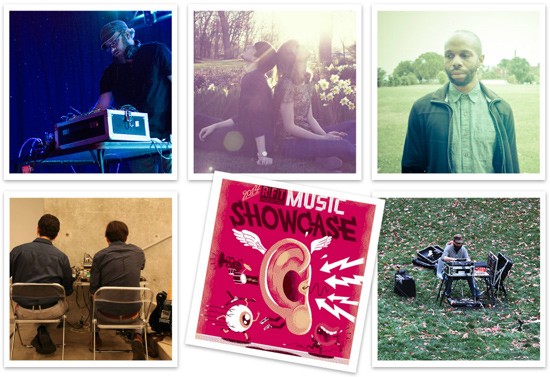 A coworker of Eric Hall once asked, "Are you a musician?" Hall reportedly replied, "No, where did you hear that?" A more accurate title for Hall may be "sonic artist," even though we wish most musicians shared his consciousness of texture and timbre. For Eric Hall, any intentional or aleatoric noise can be electronically mangled into the spontaneous compositions of a 22nd century orchestra. Hall furthers his each-sound-is-precious aesthetic by documenting nearly every live performance and posting the results to his Bandcamp page. For a lesser non-musician, this habit could resemble social media over-sharing, but keeping up with Eric Hall online is more like following a forward-thinking electronic-music blog than looking at pictures of your friend's salad. -Ryan Wasoba

Golden Curls marks the second collaboration between singer/keyboardist Sarah Downen and guitarist/keyboardist Noah Blackwell. Their prior project was Robert Ritter's twinkling Bear (the Ghost). Through a series of wi-fi connections, the duo constructs gossamer-like ambiance that slips in and out of lucid consciousness. Glockenspiels, an organ and Downen's palpable exhalations give Golden Curls a glitter-coated sheen that shimmers within its diaphanous textures. Here, everything feels warm, almost sun-soaked, in the disorienting effect of Golden Curls' balmy reverb. Like the gauzy slow burn of summer, Golden Curls' Warm Fiction EP unwinds as percussion and waning analog synthesizers caramelize under Downen's vocals. -Blair Stiles

Few bands in town are as recursive as Ou Où. The electronic duo of Patrick Weston and Travis Bursik shows no hesitation in returning to compositions and drastically reworking or pulling them apart completely. Such revisionism was at the core of last year's Biocities, in which they invited artists like Eric Hall, Ryan Wasoba and others to make hay with the band's Geocities release. Needless to say, then, that each show is at once a new act of creation and destruction, comprised of drones, samples and musical/nonmusical textures. -Christian Schaeffer

When writing about Raglani, it's helpful to know that genre tags will fail and adjectives often only serve to dilute what the analog synthesist is aiming for. Joe Raglani has been a stalwart on the experimental-music tip for years now, a tireless tinkerer of his own craft and a sound scientist who wrests strange transmissions from his estimable collection of modular synths and electronic instruments. After a series of split releases, an alter-ego LP of Krautrock-inspired gems and an attic-clearing 2xLP called Husk, 2012's Real Colors of the Physical World was Raglani's best effort at showing his several facets as an artist. He can be patient, ponderous and perverse in his longer compositions, or he can be bright, chroma-colored and damn near danceable on his version of a three-minute pop song. -Christian Schaeffer