Emily Wells is a one-woman symphony on record. Nimble violin harmonies meet looming keys and trunk-rattling drum beats. She's also pretty handy with a guitar, banjo, assorted percussion and plenty more. And that is to say nothing of her voice, otherworldly and schizophrenic and looped until the whole thing resembles a hall of mirrors. How do you do all that live?

Last night at Old Rock House, she manned a violin, a couple tables full of loop triggers and a drum kit arrayed at her sides and behind her. Snare drum on her left, floor tom on the right and a kick drum behind her, which she played by stamping her foot on the pedal and playing accent notes with a mallet held in her right hand. Which seems like a lot, for sure, but it was hard to focus on any of that. She sang up into the mic with her head tilted, her eyes half closed, so absorbed in each song that her movements seemed involuntary.

View a full slideshow of Emily Wells and the Portland Cello Project at Old Rock House.

Emily Wells combines genres. So do most musicians in 2012. This is different for how brazen and stark her songs are, particularly on the just-released Mama. She's taking the kind of low-end rhythm kick you'd find on a Lex Luger-produced track, putting it unfiltered under baroque and classical melodies and filling out the songs with oddball experimental fuzz and hum. She's able to make cohesive music out of that mess -- I imagine she takes her disparate influences very, very seriously, enough to see patterns and through lines most of us would miss.

She's currently on tour with the Portland Cello Project, a chamber group of exceptionally talented and cross-genre prone musicians themselves, and the show's best moments came during the songs when the two groups shared the stage. During Wells' opening set, the PCP (yeah, yeah) joined her for unexpected arrangements of "No Good" and the spectacular "Passenger."

The Cello Project has a new album itself -- called Homage, it comprises a dozen-odd re-imaginings of hip-hop hits. Of the many that are fairly literal translations of melody, the best are (unsurprisingly) Kanye West songs. Before the group played "All of the Lights," the group's spokes-cellist described him as "the best modern composer." I have no idea if he was being ironic or not, but I sure hope he wasn't.

The novelty of hearing Lil Wayne's "Lollipop" as a baroque canon and Adele's "Rolling in the Deep" as a rich chamber piece was fun but paled in comparison to the few moments during the set where the group played music actually written for their instrumentation to begin with. The PCP's take on Gideon Freudmann's "Denmark" was genuinely moving. Though I completely understand their predicament -- if you just play music designed for a cello ensemble with a flute and a French horn, you don't get gigs in places like the Old Rock House, and the opportunity to get a new audience excited about the possibilites of chamber music is lost.

They followed "Denmark" by inviting Wells back to the stage to perform her cover of Notorious B.I.G.'s "Juicy" with them -- the point of closest contact between the two acts. Though it's hard to imagine her doing Kanye West and Jay-Z's "That's My Bitch" and introducing it on stage as "That's My Sandwich," as the PCP did earlier. 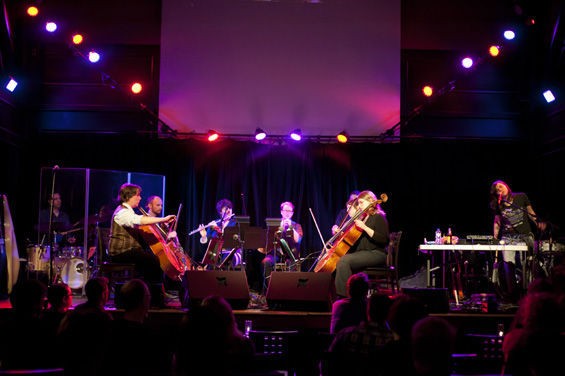