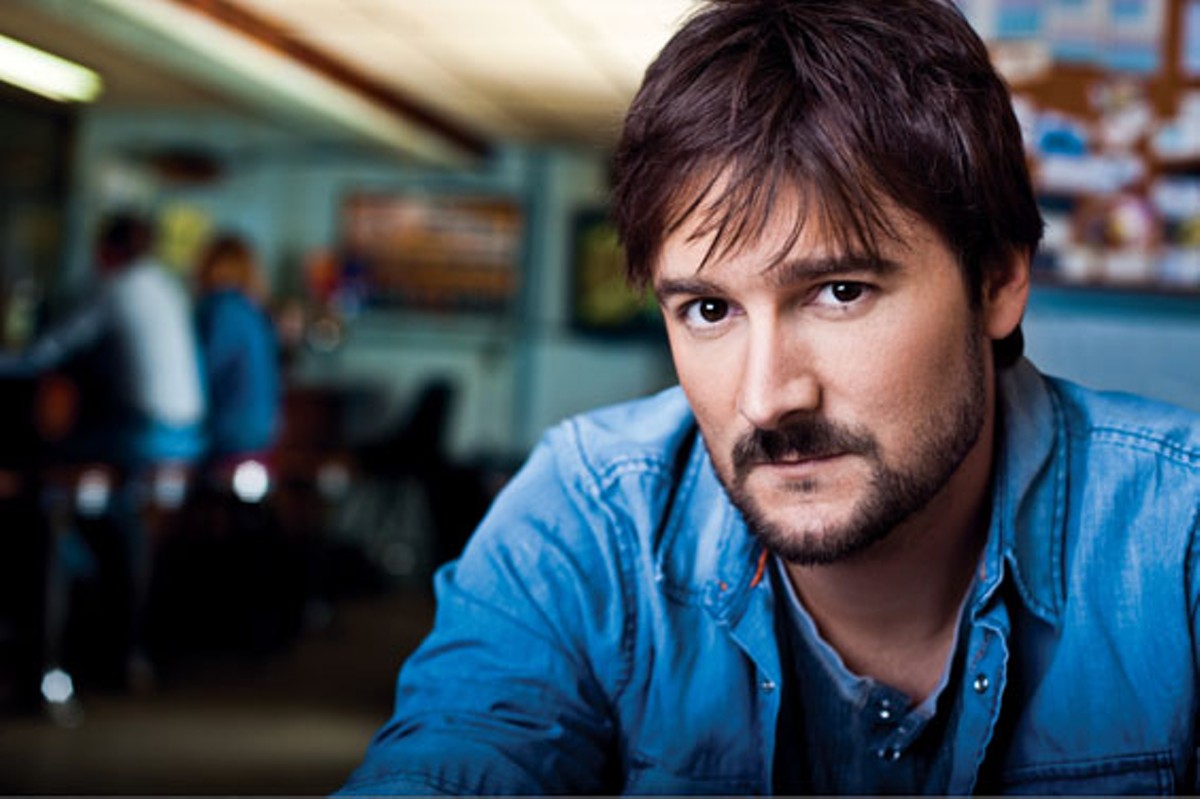 Eric Church exists in a strange world: one where he can unfurl an American flag from the rafters during a song that contains the line "Yeah, give me a crowd that's redneck and loud" and simultaneously appear on NPR's rundown of its favorite albums of 2011. That album would be last year's Chief, and it contains entire songs devoted to Bruce Springsteen, country livin' and Jack Daniel's. In "Country Music Jesus," he deftly raises uptight eyebrows on opposing ends of the social spectrum in one sentence: "We need a second coming worse than bad/some long-haired hippie prophet." We talked to Church about his schizophrenic fan base and why he doesn't use social media before his Blood, Sweat & Beers tour makes its stop at the Chaifetz Arena this week.

Kiernan Maletsky: You're someone who has had appeal outside of the general country umbrella but also within it. Do you have any thoughts on why your music has appealed to so many more people than some of your peers'?

Eric Church: Our strategy has been a little different. And I don't know if it's a strategy but I guess my philosophy. I'm not as concerned about whether the song's a hit. I don't think about singles at all. We go in kind of old school to make a record. That's not very popular in the digital-download age. I think because of that, it appeals to more people.

One of my pet peeves is people, especially in the country format, who run songs up and down the chart. It doesn't mean anything. They have No. 1, No. 1, No. 1, and nobody cares. I think it's about going in and making a product that people are going to commit to and care about.

The Chief record...it's almost surprising to me, the number of lists it showed up on. Rolling Stone, NPR, Spin magazine, these aren't places country albums just show up. I love it because I think there's a stigma still out there about country music. People have a perceived notion of what it is. If we can get some records on those lists, then maybe some people who aren't listening to country music will come check out what we're doing and like it.

In a lot of corners of the music world, the genre labels are disappearing a little bit; so many people are pulling from so many diverse places. And it's no different for country musicians. I feel like you have a lot of disparate influences. And yet people still talk about the country format; they talk about this world as though it is as insulated as it was years and years ago.

Why do you think that is?

We've earned a lot of those things with the music we've put out — some of the stigmas and some of the negative connotations. We've not done a very good job of feeding the other side of that. Which is: Since I've been in the country-music industry, and it's been six and a half years now, the music's as cool as it has been. There's more singer-songwriters; there's more just different personalities. As opposed to the machine. For a while, Nashville became a machine. It became, "This is a kind of artist, and we've got twelve of them."

The cool thing now is because of the digital age, you can just find people. There are so many ways to get the music out there; there are so many ways to get it heard. The lines have blurred so much between every genre that it has allowed somebody like me, who, maybe four or five years ago, was either on the fringes of the format, to be embraced. I think the format has shifted. There are a lot of young people listening to country music. I can remember three or four years ago, it was not cool to walk on a college campus and have any country artist on your shirt. And it's become very hip. That's been very important to the growth of the format, and it's specifically important to us. My demographic is not 40-year-old soccer moms.

Do you think it's important to use the digital tools at your disposal to connect to fans?

I have somewhat of a different view on that just because I don't tweet. I don't even know how to get on my Facebook page. For me, we've kept it entirely about the music. Here's where it's a double-edged sword: We're here because people told people about us on Twitter and Facebook.

The reason I'm never involved in it is, it's not that interesting to me — I don't have that much going on to where I feel like people should know what it is. It's also just so I can focus better on the music. If I start focusing on how funny I can be on Twitter or how much stuff I can put on Facebook, then I think it takes away from writing songs and doing things in my life that make the music that much better.

The album name — Chief — is a tribute to your grandfather, right?

It's two things. The "Chief" nickname developed from being on the road. A few years ago, I started putting on a hat and sunglasses. It happened organically — I wear contacts, and we were playing places that were so small. I'm six-three. I'd get up on these stages, and I'd have to duck under the lights. And they'd end up baking — like a rotisserie — they'd bake my contacts. They'd pop out, and I'd end up playing the show stumbling around. Somebody suggested sunglasses, and I put the hat on just for sweat — it was a hundred degrees in these places. Something happened, and it just kind of stuck. When I didn't have 'em on, people were irritated, saying I didn't have the full uniform. The band started calling me "Chief" when I put the hat and sunglasses on.

What they didn't know was that was my grandfather's nickname. He was chief of police in the town I grew up in. And everybody called him Chief. I thought it was a neat coincidence. Two different generations of people, and we got the same nickname.