The prolific artist has been especially active of late, with a new EP and several high-profile collaborations 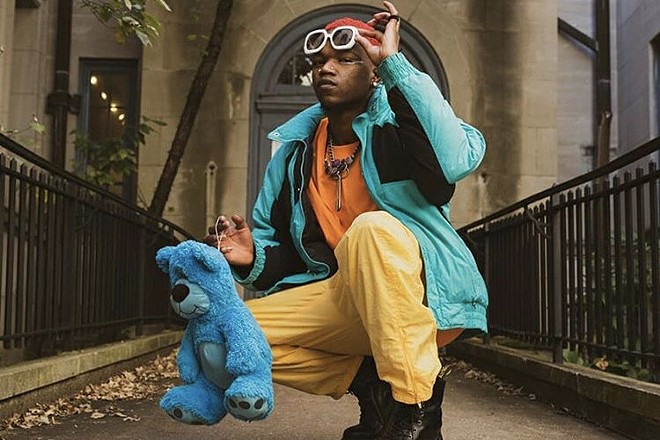 Inspired by childhood memories of St. Louis and a teddy bear mascot, as well as “fantasy movies and things that are uncanny and surreal,” musician and “nightlife icon” Eric Dontè has always created a dichotomy of light-heartedness and boldness.

“It just comes from being an alt black boy from the hood that likes experimental music,” Dontè says of his self-defined genre “ghetto trance,” which he describes as “a combination of hip-hop, R&B, punk and trance, with a taste of experimental and cutting-edge atmosphere.”

While many may be familiar with Eric Dontè, who has been performing in the city since around 2016, it can be hard to keep up with the prolific artist. Dontè’s first full-length album God Don’t Like Ugly, came out that year, and his EP A Lamp in the Room was released in 2018, featuring standout single and video “Nothing.” Since that time the rapper has stayed busy, posting freestyle videos, new singles and collaborations with local musicians including singer-songwriter and producer Zaethone.

The past six months have been an especially fruitful time. Dontè put out the stellar EP Don’t Play With Me, started a new rave collective, opened for New York rapper billy woods at Columbia venue Cafe Berlin and was featured on Paris-based musician Sicaa’s song “Departure Unknown,” with a music video collaboration with St. Louis royalty Maxi Glamour.

Filmed by Dontè’s longtime videographer and collaborator Dylan Schnitker, the video came out in March, starring Dontè and Maxi as futuristic green and blue aliens. Sicaa and Dontè met through the Black Marble Collective, and their track “Departure Unknown” echoes a glittery outer space beat alongside the music video’s dream-like gauziness. Glowing in their sprite ears, Dontè and Maxi excitedly roam around south city in search of gas station treats.


Dontè says that his music videos are very important to him. “When I’m writing music, I already see how I would like to be performing in the music video,” he notes. The collection of videos he's released over the years feels like a treasure trove, where one might reach in and find goth vampires, fairy-tale makeovers and a big rainbow wig.

Prior to the pandemic, Dontè lived in Chicago for a couple years, where he continued performing and writing music. At a party in Chicago one night, Dontè met producer Jeremiah Meece. The two quickly hit it off.

“I had already heard of [Meece] because they had produced for other artists I love like Mikki Blanco and Mister Wallace,” Dontè says, “The night we met, I just put it out there that we could snap on a track together. I could tell they got that all the time so I didn’t really force anything. About a year later, they hit me up.”

Out of the beats that Meece sent over, Dontè picked the ones he loved, creating the five songs for his latest EP Don’t Play With Me. Released in April of this year, the record fearlessly plays with fantasy and reality, seduction and humor, vulnerability and coolness. Even its shortest song, the intro “Tried to Take Me Out,” carries one of the catchiest choruses, managing to sound both soulful and spooky. Meece’s beats and keys provide a retro and often hypnotic force over which Dontè adds playfulness with his versatile voice.

Every track beckons a different mood: “Homie Whaddup” imagines a good day from good sex, getting paid, or maybe “you might be high.” “Horror Movie” revolves around Dontè’s love for scary movies. Perhaps Dontè’s voice is the director of the movie, and we, the listeners, are the main characters instructed to “keep running” from the scream around the corner. “Feel So Good,” the last track, switches to a more ethereal and misty place than the rest of Don’t Play With Me. Dontè rhymes and sings intimately (“your stomach, I kiss it”) about feelings between two people, where nothing else matters.

Although under a singular moniker, Eric Dontè is always surrounded by collaborators and community. His music videos naturally incorporate groups of fellow local artists, and this culture of inclusion is a huge part of Dontè’s ethos.

Think back to the 1990s rave scene in St. Louis: The address to the rave was often kept secret, revealed at the very last second to a select group. Today, Materia, a new arts collective which Dontè helped form, is bringing rave parties to St. Louis, with yes, an address attached to each flier. Materia is composed of other electronic musicians and DJs Nadir Smith, Manapool, Umami and Sweeet, who “all had the same vision for experimental music raves, which don’t happen often here,” in Dontè’s telling. The monthly shows have mainly been inhabiting house venues and basements, influenced by a lack of “club” venues in the city since the pandemic and perhaps by an “experimental” desire to stray away from the constraints of traditional venues. Dontè defines their audience as “the weirdos, the outcasts. Our events make everyone feel comfortable, everyone is welcomed.”

“I grew up feeling unheard, and when I started doing music, I think people really started paying attention to how I may really feel. My music is the more assertive version of me,” Dontè explains. “All of [my] music is about things I actually experience and go through. I want people to know you are in control of your own narrative. I want my music to make people feel like they can rule the world.”

Eric Dontè seems ready for a world takeover guided by his stacked future plans: a possible headline show, Don’t Play With Me music videos, learning how to DJ and a promise of more songwriting. “I have so much in the vault I can’t wait to put out,” he says.

Like many St. Louis musicians, Dontè wants the wider country (or intergalactic universe) to notice St. Louis as a place of creative gravity, and also really fun shows. He has hopes “to show the world what STL is made of through vibes and song,” he says.

“So far, everyone tells me they wanna visit here. I make it look fun. I’m like, it isss!” Delia Rainey is a musician and nonfiction writer from St. Louis, Missouri. She has been involved in the St. Louis music scene with her band Dubb Nubb for over 12 years. Her recent writing has been featured in Post-Trash, new sinews, DIAGRAM, and elsewhere. Find out more on Twitter (@hellodeliaaaaa) and deliarainey.com...
More
Scroll to read more Music News & Interviews articles (1)
Join the Riverfront Times Press Club