Essential Listening to Prepare for Yes' Performance at the Family Arena 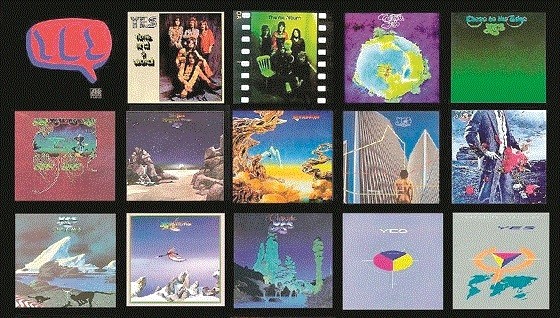 Listen along and enjoy the journey.

No musing about Yes in 2015 is complete without a note of mourning for Chris Squire, who passed away in June. Squire was the band's most consistent member, and we begin our list with one of his first great basslines. "Survival" is the last track on the first Yes album, launching from a Squire-led riff that would feel at home on a Thin Lizzy record. The track hints at the band's future ambitions -- a swing section via drummer Bill Bruford here, an operatic harmonic shift from vocalist Jon Anderson there -- without straying too far from the confines of rock & roll. This will not always be the case.

For many, The Yes Album is the band's first great statement, kicking off the most fertile period in Yes' career. The record was the world's introduction to guitarist Steve Howe, whose jangling, jazz-steeped style further distanced Yes from its peers. "Starship Trooper" is a linear verse/chorus rock song at heart that isn't afraid to take drastic turns, as seen in Howe's acoustic solo around the 3:15 mark. Without "Starship Trooper," it's hard to imagine Yes making its way to masterworks "Roundabout" and "Heart of the Sunrise."

With 1971's Fragile, Yes solidified its most iconic lineup: Anderson, Squire, Bruford, Howe and new keyboardist and synthesizer connoisseur Rick Wakeman. Fragile was The Yes Album perfected. Close to the Edge, on the other hand, is a pinnacle of human achievement. Its title track might be the best 18 minutes and 45 seconds in progressive-rock history, from the free-fusion opening to the shockingly funky verses, to a baptismal, trippy-as-hell organ movement in the middle, with each thematic return playing like an epiphany. "Close to the Edge" is required listening for anybody even remotely interested in prog rock -- and an educational tool for millennials who overuse the word "epic."

The period from 1973 to 1976 saw Yes clumsily trying to top Close to the Edge. Song lengths stretched further than the content could sustain on albums Tales from Topographic Oceans and Relayer. The band (now featuring drummer Alan White in place of Bill Bruford) cut the fat on Going for the One, and that conciseness served the band well. "Wondrous Stories" is a fan favorite, a mystical acoustic track that puts Jon Anderson's clear voice at the forefront and still manages to squeeze in a ripping Steve Howe guitar solo in less than four minutes.

Following Going for the One, the number of shifts in Yes' lineup becomes almost comedic. On 1980's Drama, Jon Anderson and Rick Wakeman are replaced by Trevor Horn and Geoff Downes (also known as the founding members of "Video Killed the Radio Star" band the Buggles). The result is a move toward a more modern (circa 1980) hard-rock direction, with Steve Howe gritting up his guitar tone and the band embracing pseudo-Sabbath riffs, such as the intro to "Machine Messiah."

90125 will always be known for Yes' biggest -- and least typical -- hit song, "Owner of a Lonely Heart." However, "Changes" is the best representation of this phase in the band's career, showing how the group used newfangled 1980s technology -- samplers, the flexibility of digital recording -- as compositional tools. Steve Howe was out at this point, and the super-processed guitar tone of his replacement, Trevor Rabin, might be hard to swallow, but the return of vocalist Jon Anderson makes up for it.

The thirteen-year gap between songs on this list reflects the audible turmoil in Yes. The band essentially spent a decade fighting between the glossy style of 90125 and the warmer, more adventurous Fragile era. 1991's confusing Union went as far as to include two lineups of the band -- a modern and a classic incarnation -- with each writing half of the album. The 1997 album Keys to Ascension seemed like a slight return to form. Most of the album's tracks are live recordings of pre-"Owner of a Lonely Heart" songs; perhaps revisiting those tunes influenced the two studio tracks on Ascension, "Be the One" and "That, That Is." The latter clocks in at nineteen minutes and contains some of Jon Anderson's best vocal works since Close to the Edge. The virtuosity in the instrumentalists has been scaled back, and for the first time in twenty years, it sounds like Yes is having fun being Yes.

Since 1996, Yes has released a handful of albums. None are bad, but none are essential either. Evaluating the band's discography -- and the setlists of its most recent tours -- suggests that Yes has an impressive ability to learn from its missteps and come out better for it in the long run. Because of this, we are placing our bets on a Family Arena show leaning on the band's classic 1970s material. At this point, Yes is in legacy mode, touring to celebrate its past rather than prove any new relevancy. And that is fine by us, because the greatness of songs like "Close to the Edge" and "Starship Troopers" knows no expiration date.