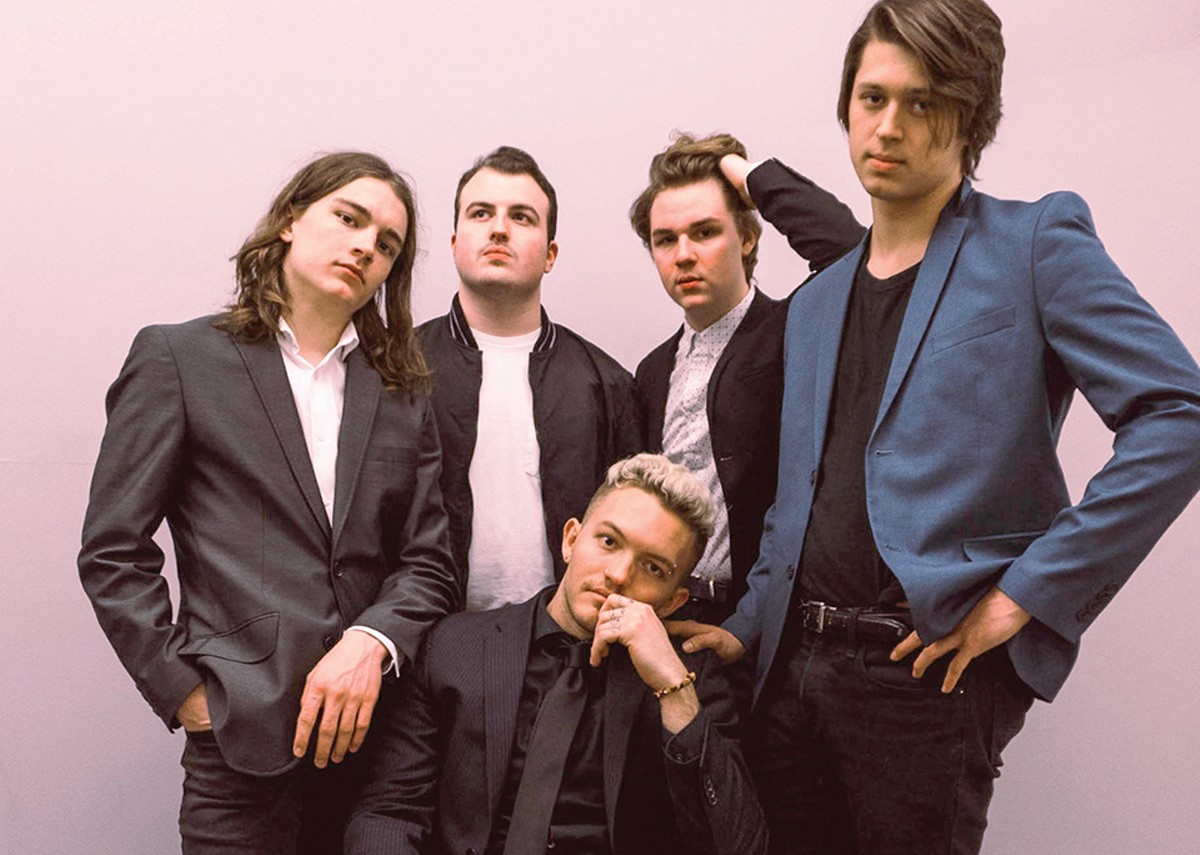 For its latest record, Thames has moved away from Brit-rock toward a more electronic palette. EMMA BRIGHT

If you play in a St. Louis band, naming your group after a foreign port of call is a tricky proposition. Our region has a losing track record with proper pronunciations of overseas names — Francophiles would shudder at the hard "oy" sound we land on in "Gravois," to say nothing of what Missourians have done to the palatial namesake of Versailles ("Ver-SALES") in the center of the state. Given that we don't even agree on what vowel sound should come at the end of our state's name, this is no surprise.

But that doesn't make things any easier on the moody experimental rock quintet Thames. The band formed when its members were in high school, and a shared fixation with Radiohead led them to the name of England's longest river. Never having heard the name said aloud, the band set about introducing themselves as "thaymes" — full pronunciation of the "th" with a long "a" sound — as opposed to how any Londoner would refer to the "temz" that flows through the center of the city.

According to Thames' singer, songwriter and guitarist Gabriel Jackson, the variety of (mis)pronunciations has become a charming quirk of playing in the band.

"Every other person would say it a different way — even my mom, who is probably the biggest fan, will call it a different name depending on what she's feeling," Jackson says.

So if the name Thames — however you want to pronounce it — betrays more than a little Anglophilia, on its latest release, Spotlight, the band moves away from some of its Brit-rock influences (Arctic Monkeys and the 1975 with little bits of Muse and Elbow poking through) and embraces an amorphous electronic palette and emotionally naked lyrics.

That shift in sound is part of a continued evolution for the band, which had its rather inauspicious beginnings after an aborted jam session with Jackson and drummer Sean Buchert. The pair had played as high schoolers in a previous group, but when Jackson brought over his own songs, he received a chilly reception from Buchert.

"He actually turned me down the first day we went over my material," Jackson recalls. "He stood up in the middle of my songs and sent me home."

Once Jackson hooked up with fellow Webster University student Zander Hayes (who plays synth and guitar), Buchert changed his tune. "I got a random text from Sean, telling me he was sorry that he told me to fuck off. Now he's my best friend — we probably spent a year working on this record together." Thames is filled out by Noah Gregory on piano and guitar and bass player Connor Fiehler.

For its previous EPs, Thames relied on the braintrust at Sawhorse Studio. Jackson recalls it as a flurried experience. "We would book a twelve-hour session on a Sunday and record everything over one weekend," Jackson recalls. "It was an odd way of recording a project, and that didn't allow for that much creativity — it didn't allow for any lightning-bolt effect."

Jackson credits the crew at Sawhorse for showing a fledgling band how to make an album. "The guys at Sawhorse taught us so much about how to record and how to be a band — we owe so much to them," he says. But that experience, coupled with Buchert's growing skills in recording and producing, led Thames to self-produce Spotlight. Aside from drums and final vocals, Buchert handled all the recording in his basement.

"It was a big jump, but we trusted Sean to do it," Jackson says. "It definitely made us feel closer — I can't tell you the amount of 3 a.m. nights spent trying to get the most miniscule thing down."

Jackson outlines the genesis of several songs on Spotlight as well as a few of those "lightning-bolt moments" — the sparks of creativity that come with the freedom to tinker and perfect. For the album-opening title track, Buchert's addition of a relatively subtle, ambient guitar part provided the secret sauce. For the darkly danceable "You Do It To Yourself," he recalls sweating over finding the perfect synth sound to give the track a swooping sense of lift-off.

"Having no timetable was profound for us," Jackson says. "Toward the end, we had to decide that we were finished. We had to gauge that with each other."

The late nights and countless mixes paid off — Spotlight finds the young band in a place where it is comfortable with rock dynamics but more eager to play with atypical rhythms and moody keyboards. Jackson's voice shows a sensitivity and guilelessness that helps sell some of the more emotionally loaded lyrics.

"The biggest thing we wanted to get out of this record was that we wanted to tap into a lot of emotions and sonic avenues we hadn't before," he says. "Our old sound was a little more rock oriented, which wasn't bad, but we wanted to make more dance music. The album plays a little more on sadness and heartache — I was more vulnerable with my lyrics."

Spotlight is available to stream and purchase now, and Thames will celebrate its release with a show at the Ready Room on November 23. Once summer comes and school schedules permit, the band plans to tour around the Midwest and beyond. Jackson says that the band's plans are modest, but that he's prepared to keep Thames — no matter how you say it — on the tips of music fans' tongues.

"It will be interesting if we make it big and have to answer to some people overseas," he says with a laugh.