Finding Hip-Hop in Kazakhstan and Country in India: American Voices Sets Up in St. Louis 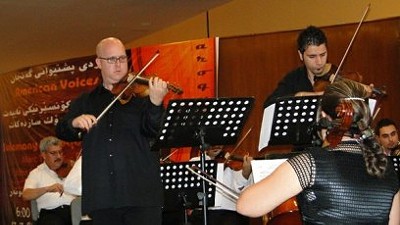 American Voices
Marc Thayer, American Voices' director of education, plays at YES Academy in Iraq. The group has a presence in St. Louis.

Diplomacy between nations doesn't always involve dignitaries or high-level negotiations. A group with a presence in St. Louis engages in "cultural diplomacy," which involves exchanging musical expertise between Americans and countries often hit hard by conflict. Since it became incorporated as a nonprofit in 1993, American Voices has been operating summer youth performing arts academies, workshops and concerts in dozens of countries around the world.

According to the group's web site, the American Voices has "performed concerts, workshops and master classes as well as interactive performance projects to over 200,000 audience members in 110 countries on five continents and reached tens of millions more through live television and radio broadcasts across the globe."

And the group took over the U.S. State Department's American Music Abroad program, which will send at least ten American music artists from a wide range of genres to roughly 40 countries. The group also donates music scores, method books and instruments to countries such as Lebanon, Iraq, Afghanistan and Jordan.

RFT Music recently sat down American Voices' Director of Education Marc Thayer and Director of Communications Paul Rockower at a coffee shop on South Grand to discuss the group's programs in St. Louis and around the world. Thayer -- who spent nine years working at the St. Louis Symphony before joining American Voices full time -- also shared some surprising international perceptions of popular music in the United States.

When did your organization set up shop in St. Louis in the form of a permanent office?

Thayer: I left the symphony in May to become full-time, so I work full-time with American Voices. And toward the end of August, we started a new project with the State Department's cultural touring department called American Music Abroad. And that allowed us to expand our staff. For the first time, we have staff in the U.S. We haven't before that. It's always been in Bangkok or Europe somewhere. And all of our work has been outside of this country before now. We're trying to have more of a presence here and more activity here. And we're bringing students here from the Middle East to study music and we have expanded the board so that a majority of board members are here in St. Louis. We're looking for new donors, new support, and looking for ways to grow and expand and become permanent here.

What sort of programs have you started for St. Louis and what programs are you planning for the future?

Thayer: After my first summer teaching in Iraq, I came back and talked with St. Louis University where I taught previously. I taught violin, viola and conducted their string orchestra. And they developed a scholarship program for students to come from Iraq and now we have some from Lebanon. We're in our fourth year. Students come as ESL students full-time. They're also on scholarship with the St. Louis Symphony Youth Orchestra and play in that orchestra while they're here. It's a partnership, a joint-scholarship program. And now one of those students is going to [the University of Missouri-St. Louis], he's stayed after the one-year program with SLU. One is also going to [Southern Illinois University-Edwardsville] and studying ... pedagogy violin teaching. [And he] will go back to Iraq and start a program for very young children.

And this past year, we have started a program bringing musicians from other countries here for short-term residences. We had two musicians here in December from Morocco who were here to study more about American bluegrass and folk music and jazz and improv. They did some performing while they were here, played in some elementary schools while they were here, did a couple of public performances and did some classes with various musicians here in town. We're hoping to have four musicians from Kurdistan in northern Iraq here this spring, possibly a Kurdish string orchestra next fall. And we hope that the student scholarship program will expand, so we have more and more students come short-term to study, to do teacher training and to go back and develop schools. We've been teaching all over the Middle East and we'd like to have more students come from different places.

Rockower: It was founded in 1993 with more a focus on Central and Eastern Europe -- countries that were emerging from the Soviet Union and from behind the Iron Curtain. Since then, we've expanded our mission to work more with countries emerging from conflict or isolation.

We're going to have what we call a YES Academy -- a Youth Excellence on Stage. We're going to have one based in Thailand that will have students from Thailand, Nepal, Cambodia, Burma possibly, Vietnam, Pakistan. They'll be studying traditional American performing arts and American musical genres - hip-hop, jazz, classical music, Broadway performing arts. In fact, our executive director lives in Bangkok. He managed to find a girls school that was doing Wicked in northern Thailand. We found these little Thai divas working on this little Broadway performing arts academy out in the middle of Thailand.

Thayer: [A YES Academy] depends on what's already happening in that country and what the embassy wants to do. It's adaptable. In each country it may be a little bit different. Our model that we'd like to present everywhere is combination of instrumental music, voice, piano, jazz, dance, Broadway-type music and dance, hip-hop and children's theater. And when can present all of that at one time, we have approximately 300 or 400 students. And we'll finish a two-week session with two or three big gala concerts featuring all of them. But at the same time, we're doing teacher training, we're donating a lot of printed materials -- music, books, things that people need there wherever we are.