Fleet Foxes and Alela Diane at the Pageant, 7/19/2011: Review, Photos and Setlist 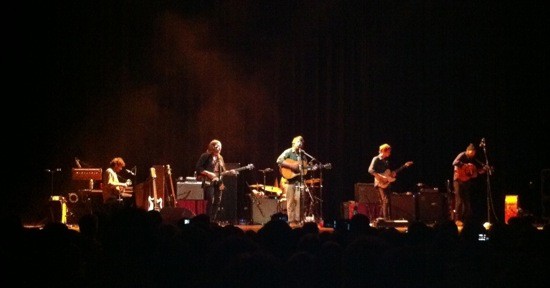 There were occasional wafts of pot smoke in the air, but Robin Pecknold was in the mood for something a little more over-the-counter. "Are there any Claritin users in the house?" asked the Fleet Foxes singer, songwriter and guitarist. But if he was battling allergies, they never clouded his scrunchy-faced, full-hearted performance.

Last night's show at the Pageant was Fleet Foxes' first headlining concert in town (the band opened for Death Cab for Cutie at the Fabulous Fox Theatre in 2008). In that time, the band has grown from a quintet to a sextet and released its sophomore LP Helplessness Blues; more important, it has grown from a buzz band to a full-on powerhouse. The enthusiastic applause scattered throughout the night -- from the band's sheepish entrance to the stage to such banalities as a roadie's exchange of Pecknold's acoustic guitars -- suggests that the sold-out crowd wasn't full of lookie-loo's and trend jumpers but true believers.

All of which is a little curious. Sure, Fleet Foxes make pretty music -- excessively, heart-breakingly pretty music, sometimes. And those harmonies! When Pecknold and his bandmates do their now-patented three-part harmonies (as they do on nearly every track), you can feel your follicles stand up and take notice. But gentle tunes sung sweetly don't garner this kind of attention or devotion. At last night's show, the band made a convincing case for its own kind of alchemy -- English and American folk idioms mixed with an idyllic imagery and good, old-fashioned naval gazing.

And did we mention those harmonies? Stunning.

The set began with the instrumental "The Cascades," a throwaway interlude from Helplessness Blues that, as an opener, gave a kind of "Theme from The Last Waltz" feel to the proceedings. The lights came up for "Grown Ocean," almost certainly the best song from the new LP. In the context of the album, the song's slow build and ebullient crescendo redeems an otherwise uneven record. At the start of the show, it sounded like a sunrise.

With little banter and a charming absence of any kind of rock-star posturing, the band worked diligently through a number of new tracks early in the set. The raggle-taggle "Battery Kinzie" was driven by some insistent piano chords, while "Bedouin Dress" showcased some of Pecknold's best lyrical tricks. He builds his songs from mangled daydreams, childhood regrets and bright-red memories. How they combine or cohere varies from song to song, and he's not an easy songwriter to pin down or cleanly parse. But when Pecknold lights upon a phrase -- the Irish longing of "just to be at Innisfree again" in this case -- a bit of musical transportation takes place.

Pecknold's bandmates certainly helped carry some of the weight last night. "Sim Sala Bim" featured fiddle from new member (and ex-Blood Brother, amazingly) Morgan Henderson and some droning harmonium from Casey Wescott. It was drummer and harmony vocalist J. Tillman who gave the tune an almost martial feel -- his booming bass drum felt cavernous even in a crowded room. The song's breakdown gave a clearer peek at two of the band's most obvious and enduring influences: traces of Fairport Convention and Crosby, Stills & Nash could both be detected amid mandolin runs and intersecting vocals.

The set's second half pulled more from the self-titled album, and judging by the number of sing-alongs and fist-pumps, these tracks have been accomplices to more than a few college make-out parties and THC-aided camp-fires. "Mykonos" was the first song in the set where it felt like something emotional was at stake. Blame it on the minor key moodiness, but it was a moment where the harmonies, lyrics and music aligned. Later, "White Winter Hymnal" proved to be the first and best example of what makes the band so special: Wicker Man mysticism and Beach Boys harmonies.

After closing the proper set with the sinister shuffle of "Blue Ridge Mountains," Pecknold came back to (again) massive applause. He began the encore with a solo rendition of "Oliver James" that gave a warm lift to an already hot night. His bandmates returned to close out the evening with "Helplessness Blues," a charming and honest mea culpa from an album full of them. In the song, Pecknold questions the worth of plying his trade across dark stages and music halls. The response from last night's crowd should have provided all the validation he needs.

Alela Diane and the Wild Divine opened the show with a pleasant, twangy set of songs that showcased a strong, occasionally seductive voice. Her band, which includes her father Tom on guitar and mandolin, kept it sweet and low throughout, giving a steady but unflinching pulse across the set. Diane draws comparisons to Neko Case, and while both singers can bring gale-like winds to their songs, only Case gives the hint of a switchblade behind the smile. An overly chatty crowd eventually warmed to Diane and co., especially on the lovely "Elijah."

Overheard "You think she sounds like who? Oh, Neko Case. That one song...'Deep Red Bells.' Sure." - fans trying to make sense of Alela Diane's opening set.

"How does a fight break out at a Fleet Foxes concert?! I'm expecting a riot at Bon Iver." - a Facebook friend's status on his way out of the show. Apparently it was a case of bro-on-bro violence.

Personal Bias I fell briefly under Fleet Foxes' sway after buying the Fleet Foxes/Sun Giant EP double vinyl (and vinyl is a good choice for this band, by the by). I have yet to fully warm to Helplessness Blues and wonder if the band's magic can endure beyond that initial first flush for many listeners. But I respect Pecknold for never phoning it in -- some new songs may fall short, but he shows a restless creativity that I admire.

Confidential to the woman in front of me, recording the entire show on her BlackBerry: please let me know how the bootleg turned out. I can only imagine the bit rate on that thing is going to make for some fantastic listening. And you only had to hold your phone up for the entire show!