Fleet Foxes Coming to the Pageant 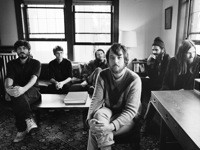 Bearded folkers Fleet Foxes have just been confirmed for a July 19th appearance at the Pageant. This will be the outfit's first headlining show in St. Louis. Last time Robin Pecknold, Skyler Skjelset and friends were in our fair city was in the fall of 2008, when they opened for Death Cab for Cutie at the Fox. Tickets start at $30.00 and go on sale next Friday, April 22, at 5 p.m.

Fleet Foxes' sophomore album, Helplessness Blues, is out May 3rd on Sub Pop. You may or may not be able to listen now due to some pre-order confusion. Not that we endorse leaks. What you can certainly do is watch the official video for new single "Grown Oceans" below.