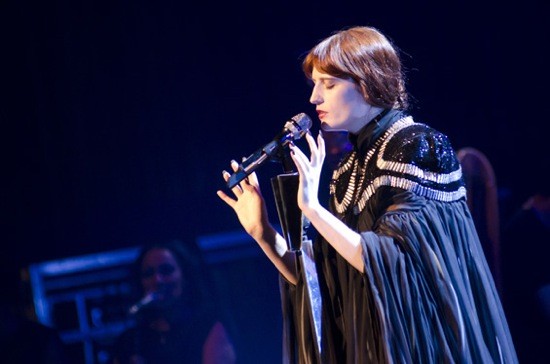 It's been a year since St. Louis last hosted Florence + the Machine, but things have changed in the short time that's passed. Florence Welch has been catapulted into a whole other realm of popularity, selling out the Peabody Opera House in what felt like the blink of an eye, or in the time it takes a browser to refresh for a chance at whatever seats might still be available.

Or in actuality, less than 30 minutes. The band released its second album, Ceremonials, in November, and it dominated charts across the pond and debuted at number six in the States.

The Peabody suits Ms. Welch, with its sophisticated beauty and grandeur - attributes shared with Ceremonials. The stage was set with pillars of stained glass, tall structures that resembled the inside of a giant clock and eight other musicians accompanying Welch (two backup singers, Tom Monger on the harp, bassist, Rob Ackroyd on guitarist, Chris Hayden on drums, pianist and Isabella Summers on keyboard). Despite there being so many people on stage, it never looked or felt crowded. The rest of the set often disappeared into darkness, leaving Welch standing, swaying and belting her lungs out in a spotlight reserved only for her. And of course, there was the fan positioned in front of Welch, giving a constant breeze that only enhances her look of being this ethereal creature, floating before us in a long black gown with a plunging neckline and collar.

But the frills are secondary to her stage presence. And that voice.

Florence + the Machine dove right in to "Only If For A Night," the opening track on Ceremonials and a fantastic way to take hold of an audience. Beginning only with Welch's powerfully poignant voice, in contrast to the softness of the harp and the striking piano, the song slowly builds, spilling into the chorus. Still, there was something missing on the crowd's part, or at least as far as Welch was concerned. After wrapping up the first song, she suggested we ditch our seats and stand, which we gladly obliged.

Welch then continued to fill the theatre with her chill-inducing vocals, occasionally stepping away from the mic to fiercely twirl her long, billowing cape until the fabric itself came alive, engulfing her in layers of patterns that almost gave an illusion of flames licking her body.

But it wasn't until the second half of the performance that Welch really let loose, pleasantly chatting with the audience and repeatedly thanking them for coming out to see her -- especially with Van Halen playing the Scottrade Center the same night. "We've had a lovely day. I've learned about the Cardinals," Welch told the crowd to cheers still fresh from a World Series victory and the impressive start to the current baseball season. "And you all could be seeing Van Halen, so I'm glad you came." Welch then mentioned how she slipped out to see Kool & the Gang, who opened for the classic rockers, and bought a Van Halen t-shirt before her own gig. It was certainly a busy evening in downtown St. Louis. With the two venues next to one another, one way to pass the time was by playing "Guess Which Band Those Folks Are Going To See: Van Halen or Florence + the Machine?" It wasn't a terribly challenging game.

The show's biggest flaw was that it lacked the delightfully twisted tales that the band's first album, Lungs, had to offer, such as "Girl With One Eye," or the outlandishly violent "Kiss With a First." The majority of the songs performed were from Ceremonials, with the set clocking in at almost exactly one hour long (excluding the encore). But there were no complaints heard among the crowd.