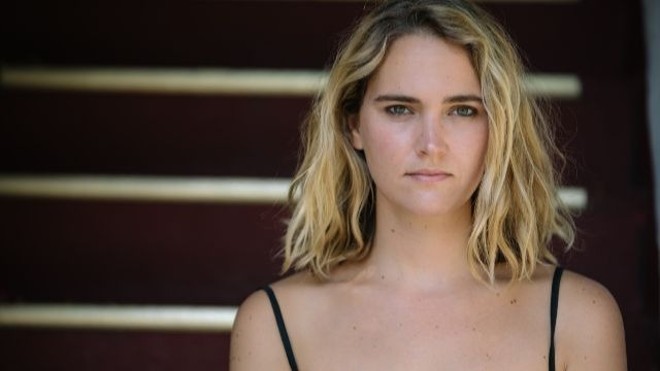 VIA FLYOVER COMEDY FESTIVAL
Jena Friedman is just one of the comedians performing at this year's Flyover Comedy Festival.
Flyover Comedy Festival, St. Louis' homegrown celebration of comedians both local and national, has consistently grown with each year that's passed since it first debuted in 2017 — and this year's fest continues that upward trajectory, bringing nearly 100 performers to 30 events in the Grove over the course of just three days.

This year's fest will take place from November 7 to 9, with headliners Kyle Kinane, Joel Kim Booster, Sasheer Zamata, White Women improv, Jena Friedman and Kids These Days. Participating venues include the Improv Shop, the Ready Room, Handlebar and the Bootleg.

Kinane has performed on pretty much every late-night show there is in addition to hosting "The Boogie Monster" podcast and regularly appearing on Doug Benson's podcasts "Doug Loves Movies" and "Getting Doug with High." He's also a Comedy Central regular who served as the voice of the station's on-air announcements for years in addition to making appearances on @midnight, Drunk History and TripTank.

Booster has performed on Conan and The Late Late Show with James Corden in addition to filming a Comedy Central Stand-Up Presents special in 2017. He's also appeared on Netflix's The Week Of, Hulu's Shrill and TBS's Search Party.

Zamata is best-known as a cast member on Saturday Night Live from 2014 to 2017, in addition to serving as a contributor on Full Frontal with Samantha Bee. She's performed on This American Life and The Late Show with Stephen Colbert and released a stand-up special called Pizza Mind in 2017.

Friedman worked as a field producer for The Daily Show with Jon Stewart and as a writer for The Late Show with David Letterman. Paste magazine named her special American Cunt one of the ten best comedy specials of 2016; she's since teamed up with Adult Swim for a series titled Soft Focus with Jena Friedman.

Kids These Days is a sketch comedy group made up of several New York-based comedians who work at The Tonight Show, The Daily Show and more; the group has sold out every show it has performed in NYC and has also made appearances at numerous sketch and comedy festivals across the nation this year. 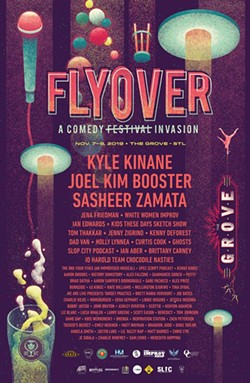 Click to enlarge.
In addition to that staggering array of headliners, the fest will see performances by Kenny DeForest, Ian Edwards, Holly Lynnea, Ian Aber, Aaron Brooks, Jenny Zigrino and Kenny Kinds, among many more.

“We’re thrilled that we’ve been able to build on the success of the past two years to bring a lineup that is unlike anything we could have imagined,” Flyover Comedy Festival co-founder Kris Wernowsky says in a press release. “We’re equally thrilled to bring all of these amazing and talented people to showcase everything that St. Louis has to offer.”

Tickets for Flyover Comedy Festival go on sale on Friday. Three-day all-access passes will go for $45, but for a brief time are marked down to just $30 for early birds.