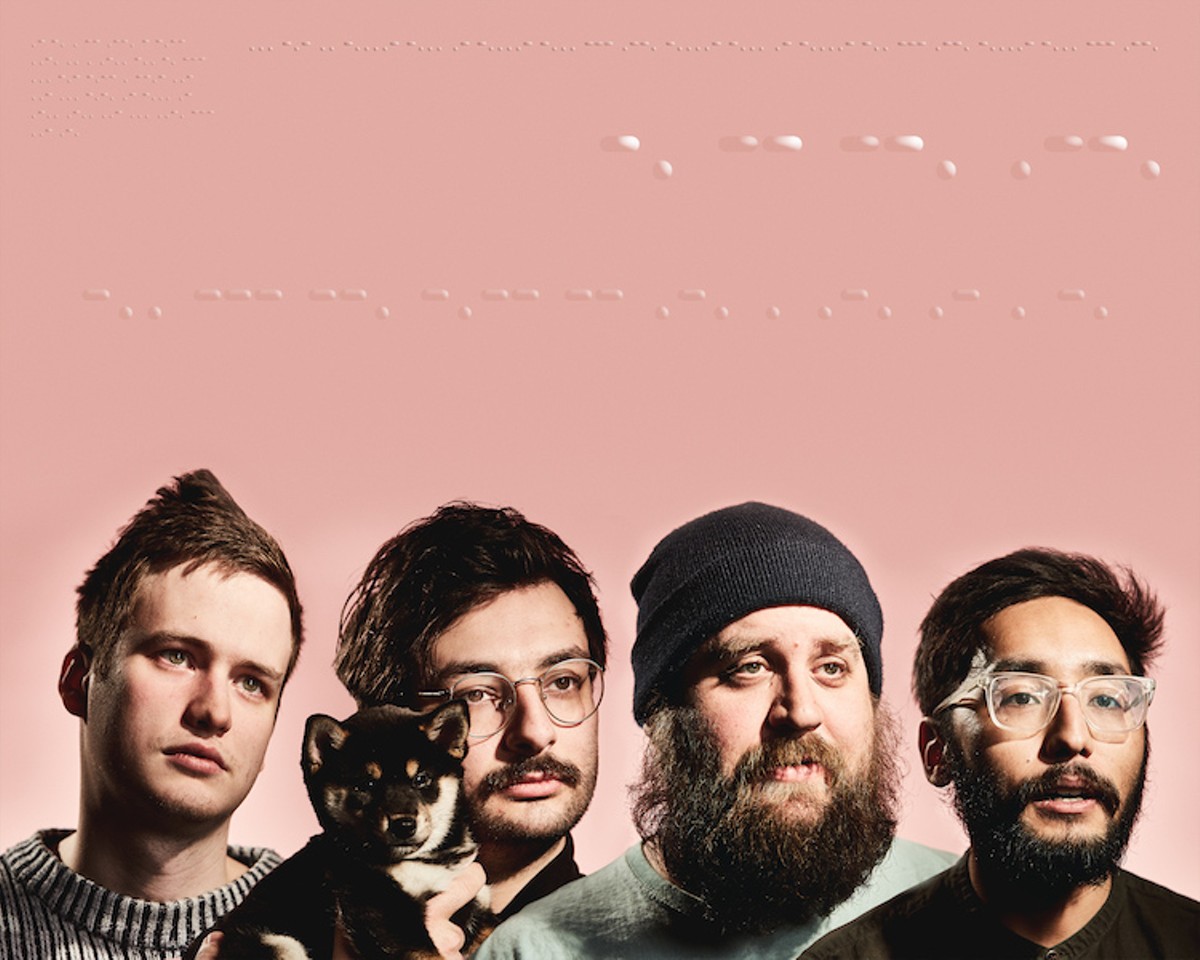 Foxing is back in town for a June 23 show at Old Rock House. HAYDEN MOLINARO

Despite being members of one of the most successful bands to come out of St. Louis in recent memory, the guys in emo-rock outfit Foxing are used to doing stuff themselves. True to the DIY spirit that has guided them since the band's early days, guitarist Eric Hudson is speaking to Riverfront Times as he's driving to Nashville to return a rental van.

"Growing up, everybody in the band did DIY shows, booked DIY tours," he says. "We've all done that stuff. Unless you're picked up by a major label right away and they put a bunch of money behind you, that's kind of the only real way to do it anymore. You have to self-book, really eat shit on tour for a while. It's less of a like a culture or a choice anymore; that's just what you have to do."

That's why Hudson and his bandmates admire ambitious musicians who aren't afraid to put in elbow grease of their own. In fact, Foxing is making a point of highlighting other local acts worthy of national attention by headlining a show on Saturday, June 23 at the Old Rock House. The all-STL lineup is rounded out ghetto-trance artist Eric Donté and electro-folk singer-songwriter LèPonds, both of whom were recognized in 2018's Riverfront Times' STL 77, our annual list of local musicians doing big things.

As a leading group in the national emo revival and the local music scene, Foxing wants to lend a hand to other rising acts in the area, Hudson says.

"That was our goal with this show," he says. "We wanted to get artists who are not only very talented, but are also putting in the work, really grinding and trying to be something. We really appreciate that about local artists. It's really hard to establish yourself, even on a local level, so we wanted to give these artists a platform to play in front of people who otherwise might not hear them."

Foxing has benefitted from plenty of outside help on its own musical journey. The emo scene, both locally and nationally, is extremely insular: Members of respective bands let each other couch-surf and help book shows. "There aren't a whole lot of emo bands that tour full-time," Hudson says. "So when there is one in town, it's like, 'Oh, cool, come be our friends.'"

Foxing hasn't played St. Louis recently, opting instead to hit other Midwestern cities like Columbus and Indianapolis as its members wrap up recording their forthcoming full-length album.

The past few years have been tumultuous for Foxing. In December, bassist and founding member Josh Coll announced he was leaving the band to pursue a career as a filmmaker. The year before, allegations of sexual misconduct surfaced against guitarist Ricky Sampson, prompting a response from the group. The year before that, the band's tour van was struck by a truck in northern California. And if that doesn't beat all, in 2015 their trailer was stolen in Austin, Texas, with $30,000 worth of gear inside.

Each incident amounted to a setback in recording Foxing's follow-up to 2015's critically acclaimed album, Dealer, but the band has also been purposefully deliberate about the recording process.

"The main reason why it took so long is because we wanted it to," Hudson says. "We didn't take our time at all on the last record. This time, we wanted control of every part of the process and to make sure it was exactly what we want to be putting out. We didn't want to have any regrets, like we did on the last one. It was the first time we've gotten to take our time and make sure we had a polished piece of art.

"Some of these songs on the new album are two and a half years old already," he continues. "We haven't played them live, and people haven't heard them, but they're old songs to us."

Fans can expect the album out later this year. In the meantime, they can catch Foxing's first show in St. Louis in a long time — during which Eric Donté and LèPonds are sure to discover that fans of emo tend to be extremely enthusiastic, often freaking out in a way you would expect more at a punk or hardcore metal show.

"When you listen to our band on a record, or you listen other bands in the same world, you don't necessarily get a heavy sort of vibe from it," Hudson says. "It's more like indie-rock than heavy music. But sometimes when you play a live show it's more like you're a screamo band, based on the way people are going off.

"It's cool that people put that much energy behind it, but when it happens, it is a little surprising."