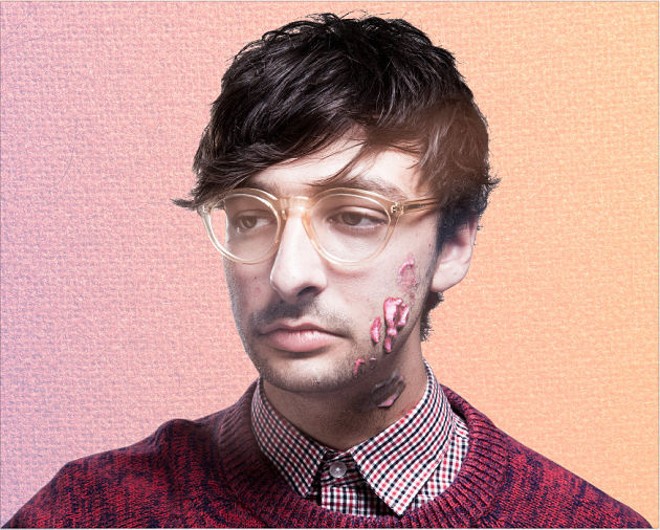 The story of Foxing's ascent from local basements and D.I.Y. spaces to concert halls across the nation filled with passionate fans is well-known around St. Louis. Aside from Pokey LaFarge, no other local act has committed to as rigorous a touring schedule while finding some measure of critical and commercial success. And while the dividends are far from huge — most members of the band have day jobs when not on tour — Foxing has been the rare rock band to rep St. Louis on a national scale.

Yet when Conor Murphy, the quintet's 24-year-old lead singer, had time to kill between Foxing's album and touring cycles, he did what he's been doing all his adult life: He made another record and went on tour. His solo project Smidley has just released its self-titled debut, and he recently got off a month-long stint opening for Tiger's Jaw. After years of singing lead for a headlining act, Murphy relished the chance to play the relative newcomer.

"It's the most freeing thing in the world," Murphy says. "Opening where nobody knows who you are is something I didn't realize I missed."

He adds, "It feels so good to convince people to like you rather than keeping up somebody's expectation. It's just so much easier, and because it's easier you have so much more fun doing it. When Foxing tours, there are people that we are going to disappoint because we don't play a song that they wanted us to. I think a lot people go into seeing a Foxing show and assume that they're going to cry during it or something."

That expectation — that a Foxing show will trigger some communal, soul-cleansing catharsis — stems as much from the band's emo-revival roots as its ability to play up a song's dynamics, both in instrumentation and Murphy's full-bodied performance. Smidley is instead rooted in indie rock, and Murphy has matched the tenor of those songs in his live appearances for the project.

"I think it's fun to perform in a serious way, in the same way that I assume it's fun to perform Death of a Salesman," Murphy says. "You have to really get into a state of mind. It's an intoxicating feeling to perform in general, I feel like. Everybody feels that at some point — the mixture of stage fright and adrenaline. It's a fun thing in the first place. But I do think it's more fun to blow it off and not take it seriously at all."

When it came time to write the songs on Smidley, Murphy dug into his library for inspiration — he name-checks Belle & Sebastian, Broken Social Scene and the New Pornographers as acts he sought to "rip off." He channels some of the verve and kineticism of the best power-pop bands — "Power Word Kill" chugs along without shattering its crystalline haze — while a delicate acoustic guitar and chunky Mellotron chords are all the backing "Milkshake" needs to allow Murphy's expressive, cigarette-stained voice to bend and break.

Murphy notes that Foxing's songs are done in conjunction with his bandmates — primarily with bassist Josh Coll and, increasingly, input from all five band members. Smidley permitted him freedom to write without running his ideas by the committee.

"For the Smidley stuff, what I ended up singing were the drafts I originally wrote; I didn't change them really at all. One of them" — lead single "Fuck This" — "was written when I was on acid, and I didn't change it at all, so a lot of it doesn't make sense," Murphy says with a laugh.

Murphy sees Smidley as a brief detour from Foxing, a pressure valve or palate cleanser rather than a serious contender for his time, his voice or his songs. In fact, Foxing is now diligently at work on its third LP, self-producing the songs at a local studio on what Murphy calls a fairly regimented daily schedule. The band hopes to have recordings wrapped up by the end of the year, aiming for a 2018 release date.

He's less sure how Smidley will play into that schedule, but at the moment he's relishing the opportunity to play his own warped, bizarro versions of pop songs.

"I think anytime that you're in a place where you don't feel like you don't have the outlet, just go make a record," Murphy says. "You're not as much of a dick to everyone."