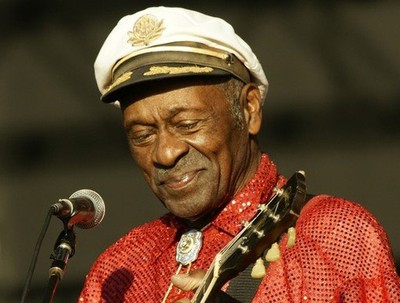 To the outsider, St. Louis' music scene could be represented by the sing-songy rhymes of Nelly or the Urge's frantic musical elixir. But the town's musical identity -- and the world of rock n' roll -- would be indisputably different without a man celebrating his 85th birthday today.

Chuck Berry, the St. Louis icon who helped jolt rock n' roll into popular culture, was born on this day in 1926. Berry -- who grew up in "The Ville" neighborhood in St. Louis City - rocketed to fame when "Ida Red" was adapted into "Maybellene" in 1955. Berry's songs throughout the 1950s -- such as "Johnny B. Goode" and "Roll Over Beethoven" -- are considered seminal building blocks in rock n' roll's rise to prominence.

Berry's accolades and influence are often-stated, but still cannot be overstated. Among other things, Berry was one of the first musicians inducted into the Rock N' Roll Hall of Fame. And his stamp on St. Louis is everywhere, including a statute recently erected in the bustling Delmar Loop.

Rolling Stone ranked "Johnny B. Goode" as number seven on its 500 Greatest Songs of All Time List. And the tune was considered influential enough to be included on a record tucked inside the Voyager 1 spacecraft showcasing Earth's music.

Berry's also experienced some low points during his career, including well-publicized brushes with the law. But well over five decades since "Maybellene" came out, Berry is still performing at venues around the world. Last year, Berry was one of the main attractions for a concert aimed at cementing the 2012 Democratic National Convention in St. Louis. And according to a Rolling Stone article published last year, Berry is still writing new music.

For those wanting to wish Berry a belated happy birthday, he'll be performing on November 16 in the Duck Room of Blueberry Hill. In the meantime, here's little birthday cheer from St. Louis' greatest musical export: