Handsome Furs at Off Broadway, 9/24/11: Review and Setlist 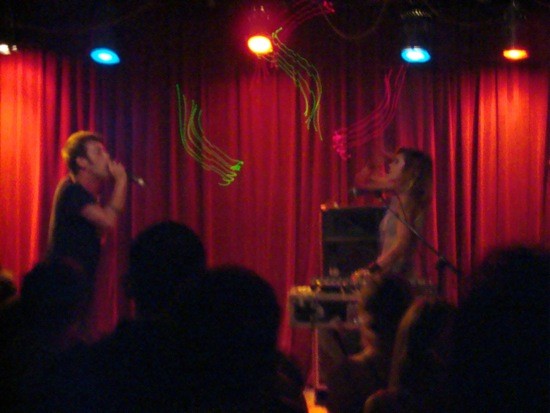 We in the moderately-sized audience could have tried a little harder, but let's be honest: There was no way we were going to out-dance or even keep up with Handsome Furs. Keyboardist/drum machine and loop operator Alexei Perry would have bested us on her own with her frantic bouncing, head banging, kicking and raising of the roof. But when you added in her hard-rocking husband Dan Boeckner and the white-hot chemistry between them, it was no contest.

It's not like Handsome Furs gave us nothing to move to. The duo's set of synth pop is nothing if not danceable, even on the almost punk "Damage" or slower ballad "Serve The People." Each song last night relied on simple but catchy synth hooks adorned with only sparse beats, repetitive lyrics and the occasional burst of Boeckner guitar riffage. Blessed with one of the great ragged modern voices of rock, Boeckner injected humanity into the synthetic music with wailing so impassioned that it shook his head as if each note was a tremor. Perry put just as much emotion into her few backing vocal parts.

This enthusiasm helped compensate for the fact that a great deal of the duo's music was pre-recorded. Most prominent repeating synth parts, bass lines and all of the drums came from Perry's drum/loop machine, though she twisted knobs and pushed buttons to switch loops in and out. But better to leave the part juggling to the machine than to stop the dancing. The group's moves proved infectious, especially when Boeckner jumped into the crowd for the coda of "What About Us?" And while they didn't ignite quite the same spark on the dance floor, the skittering "Memories of the Future" and the U2-does-the-Safety-Dance jam "Repatriated" received huge ovations. The two in return seemed genuinely thrilled to be playing the show, telling the crowd in one of their many heartfelt thank you speeches that this is what they imagined it would be like when they started the band.

Just like its albums, Handsome Furs finish up fast. Here that meant a nine-song set with two more in an encore. It looks worse on paper though, because the group's simplistic approach makes it more suited for short performances where the style doesn't have time to grow grating. Also, any more dancing would have probably killed Perry, who toned it down a notch for the encore. The break from the pace, along with the audience's affection, was earned.

Local opener US English proved an ideal match for Handsome Furs; both bands consist of a married boy-girl couple that plays synth pop. US English is a bit more subversive though, as they employ samples, some neat vocal manipulation and a greater variety keyboard sounds. James McAnally could stand to loosen up and sing more loudly, and the group's drum loops sometimes didn't sync up with their keyboard playing. But Brea McAnally has a great voice and the songs are there, both in terms of arrangement and melody.

Magical Beautiful was the middle card on the bill and brought an intriguing mixture of psychedelic synth balladry and dub rhythms. Although it were successful in establishing a dreamy feel and occasionally latched onto a nice groove, the Chicago quartet spent too much time wandering aimlessly in its ethereal soundscapes. Some of these instrumental passages served as transitions from one part of a song to another, but, however the pieces were labeled or arranged, they were too long in the live setting.