Harry's Restaurant and Bar will Rebrand as Horizon by Harry's 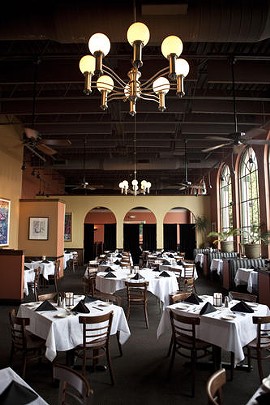 Laura Miller
The dining room at Harry's Restaurant and Bar.

Downtown mainstay Harry's Bar is undergoing a facelift. The long-running nightspot is abandoning its fine dining concept and becoming a boutique dance club.

"Yeah, we're switching things up," says owner Tim Pieri. "I get 50 calls a week asking where people can go dance downtown, and there's just nowhere. The old Velvet and all that back in the day, they've all disappeared now. This is kind of a smaller-scale dance club."

Pieri says it'll still be "the old restaurant with the view" you know and love, just a little different. The restaurant area will be turned into Horizon by Harry's, an event space and nightclub, focusing on cocktail parties, high-end bar food and busting a move. Pieri made the decision a couple of months ago, and said after 22 years, it's high time for some cosmetic adjustments.

"We just wanted to gear it towards what's coming downtown," Pieri says. "People seem excited." He's updating the space and adding twenty or so flat screens, because it's 2012 and people don't want to dance unless they're also watching videos of people dancing. They'll be bringing in local DJs and some national acts, but apart from DJ Deception, he is mum on the specifics. "I'm 44 years old, you know, I don't know any names."

"The fine dining to me has seen its last days. We decided to go more casually for the food. All upscale bar food, all homemade stuff," Pieri says, adding that the traditional Harry's favorites like homemade lasagna and liver and onions will still be available. But he's glomming onto the burger renaissance and lowering the price point a smidge; prices will range from $8 to $18 instead of $20 and up for entrées. He's also bumping the nightly cover from $10 to a recession-friendly $5. They'll remain open during the renovations, and Pieri hopes the new concept will be finished the first week of March, though they're already testing out the new menu.

"The new menu is done. We did a great lunch business; yesterday we were sold out, so it's working out good."