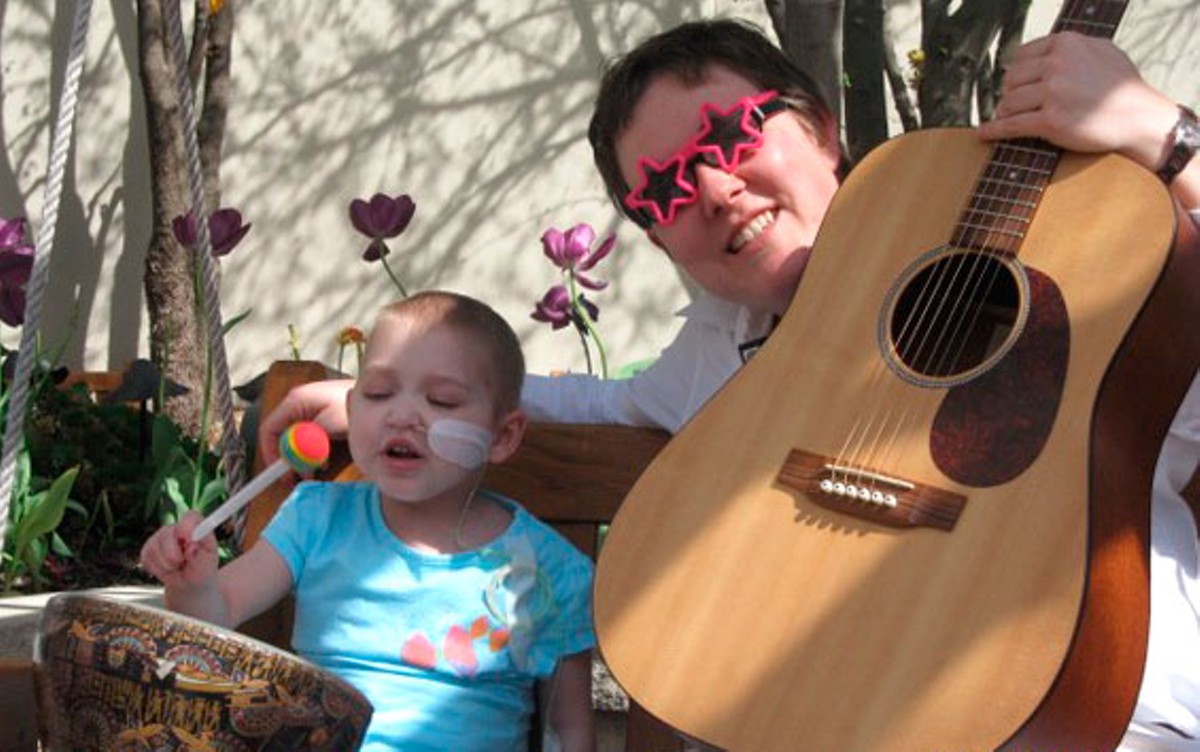 St. Louis Children's Hospital is both a happy and a scary place. Nobody wants to be there, but everybody is trying as hard as they can to make the best of whatever bad situation they're faced with. Bold art sprouts off of the walls, structures are painted in bright colors and all of the furniture is low and child-friendly. Fresh "Get well soon!" balloons spring up every twenty feet or so, straining proudly from bundles of decorative neon ribbons.

Though kids feel welcome here, it is clearly still a hospital. Bald kids in wheelchairs draw in the art room, and babies in tented incubators are pushed down the hallway, with worried parents trailing close behind. Their brows are furrowed, and their eyes are distant with worry.

As the music therapist at the hospital, Christy Merrell explores the innate connection between the human brain and music and exploits this natural relationship for the benefit of patients. On one level or another, we all understand the healing power of music. Music is an essential part of the human experience. Sad songs comfort us when we're feeling down, and happy songs make good times better. And sometimes it feels like one song can change your whole life, either though perfect timing or symbolic meaning.

Merrell's work at the hospital is a continuous source of positivity in the lives of sick and injured children. She, along with her professor at Maryville University, developed and proposed the program to Children's Hospital while she was still in graduate school. Seven years later, her music-therapy program is highly successful, but owing to lack of funding, Merrell remains the only such therapist on staff.

Undeterred by limited resources, Merrell radiates enthusiasm for her job and proudly shows off her "Tune Wagon" as she explains her craft. The Tune Wagon is a wheeled metal cart, filled with all types of instruments: small drums, tiny keyboards, bells, shakers and a couple of guitars. She has modified some of these tools for her patients with poor fine motor skills, adding velcro hand straps to drum mallets to make them easier to grasp.

We spoke with her in the hospital's physical therapy room, and it was immediately easy to see why she does so well with patients: Her smiling face, bright eyes and sincere, easy nature are a welcome presence in a world full of machines, needles and confusion.

Christy Merrell: Music therapy is the therapeutic use of music for non-musical goals. All of my goals are either psycho-social — if a kid is having a hard time coping within the hospital — or physical, like if they're having a really hard time with endurance. So I do a lot of co-treatments with physical therapy, using music to help them learn how to walk again. We'll look at their gait and see how we can make it more independent or how we can make it more functional using music. And slowly, once they get a more functional gait, we'll pull that music away and see if the muscle memory sticks.

I've had kids that have come in for numerous neurological issues. Maybe they had a traumatic brain injury, or a stroke, or epilepsy, or a brain tumor, and they've lost some of their function, depending on where the tumor is in their brain. So I use music to help with not only endurance but with fine-motor skills. I'll use guitar, or we'll do scales with keyboards and pianos.

We'll also do drumming to get them to a better range of motion—it just depends on which goal we're looking at—and then I use music to help the patient achieve that goal.

How does music therapy help with memory?

We'll often use music for memory recall. I've had kids that weren't able to orient or tell you where they were. I'll ask their parents or caregivers to tell me a song that they used to sing all of the time. Then I'll play that song on my guitar or off of an iPod and sometimes they start singing — it's almost automatic. You can see their face light up, and you can see that something is working in the brain, and then they'll start singing. And it's a really cool thing to witness. It's the greatest job in the world, I think.

I look at it as a triple major. You have a lot of psychology and family psychology. There's a lot of classes on child development and working with kids with special needs or autism. That's on top of your music theory, your private lessons.

When I started there were not a lot of music therapists that worked in a medical setting. And then here, I had to go through all the interviews and stuff, and then I basically started the program. I've been here for seven years now. It's just me. But eventually we'll probably add on as maybe we get more grant funding.

Is it a matter of resources?

Well, I think it's a matter of finding people who want to donate to the hospital through our foundation. So it's all done through donations from people that want to endow my program, or that want to give something back, which is really cool.

In a sense, the worst part of the job is losing patients. But cancer doesn't define them. Or, the brain injury doesn't define who they are. So I try to, just for that moment, allow them just to be a kid. And to give them choices. And to give them as much normalization to their day as I possibly can, and help them with those therapy goals, to get them to be more independent and to get them able to go home. And it's really cool.

It's awesome that I get to witness some of the amazing things that these kids do. Like, the progress. I love it. And progress can be defined in many different ways; it could be a kid that has a new diagnosis of neuroblastoma, or some type of cancer, or finally being able to say the word "cancer." So I do a lot of songwriting with the kids, too. It's a good way to get them to express themselves, and it gives them the feeling like they have ownership and control and power over something. And then they can start understanding and get into a better place of dealing with it.

Did you ever have any kids that found some musical talent that they didn't know that they had previously?

Yeah, there have been quite a few. This one kid, Joe, came in — he had a form of Leukemia. We'd hang out, and I'd play my guitar, and we'd write songs and stuff. I got him really into the Beatles. And then he really started wanting to play his own. So his family went out and got him a guitar and he'd come in and say, "I heard this really great new band, Black Sabbath. Have you heard of them?" [Laughs] It was hilarious. He really wanted to learn some of those songs, so I taught him some basic chords. And the next time I saw him, he had it all. It was amazing. The kid had perfect pitch. And he could improv like nobody I'd ever seen before. So, he was awesome.

But, unfortunately, he passed away. And I played at his funeral. It was very emotional, but you do get attached to the kids. When I was putting together a memory collection for their family to play at the wake, I found this song he'd written where he was kind of telling all of us that he was going to be OK. So through music he was able to express himself, not only in the moment, but also in a deeper way.

Sometimes he would get really anxious, and ask, "Am I going to die today?" And I was like, "Well, it's not likely, but someday, yeah. I'm going to die someday. It's kind of the circle of life, buddy." And he'd laugh and roll his eyes and say, "You're so cheesy."

I love this kid!

I know, right? He had a really good sense of humor. Very dry but brilliant. I would've really loved to see what he would've done with music, because I'm really sure he would've been amazing.