St. Louis punk band The Humanoids recently finished recording their second EP, Year of the Snake, the follow-up to their debut release, Are Born. We have the artwork that's starting conversations and an MP3 you won't find anywhere else.

The EP – which will be released only as a vinyl seven-inch – has a target release date of July, says Greg Stinson, one of two guitar players in the band, which practices in the quaint North St. Louis County suburb of St. John. The RFT first wrote about the band in this May 2007 feature story.

The A-Side contains two songs, “Year of the Snake,” and “Drawing Board,” while the B-Side is a cover of the Wipers' “Youth of America” – one of the several songs you might have heard The Humanoids cover live (Other bands who have gotten the cover treatment include the Bad Brains, Dag Nasty and the Descendents).

Courtesy of the band, here’s the MP3 of the Wipers cover. Click the button for a pop-up MP3 player, or right click on the text link and select "Save Target As" to download the song. The Humanoids - "Youth of America" (Wipers)

From initial listens, Snake follows the style of Are Born – i.e., melodic and driving SoCal punk that seems to attract local hardcore punks and the sugary pop-punkers of the Warped Tour set. But the new EP’s artwork doesn't quite jive with that of the first release, which resembles a comic-book style layout.

Are Born front
Snake back 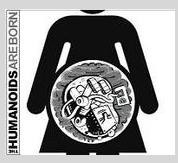 Are Born front
Are Born front
“It's definitely a lot darker than the art on our (first) EP, but I think it looks great!” says bass player Ryan Zimmerman. “We wanted to do something different.”

Different indeed. Anyway, Snake will be released on Rock Bottom Records, the Minneapolis-based label that put out the twelve-inch-vinyl version of Are Born.

So, I guess their fans will have to stay tuned for that date.

Greg and Ryan's former band, Step On It!, who did a final show back in July with Toronto's Fucked Up at the Red Sea (Read RFT Critic's Pick), was rumored to again perform with Modern Life Is War on April 18 in St. Louis.

To the disappointment of Step On It! fans, that reunion appearance is still unconfirmed, Stinson said.

People may just have to show up to the show to know for sure. The Humanoids were originally on that bill as well, but have since dropped off the line-up.