How Not to Associate Music With the Mark McGwire Steroids Admission 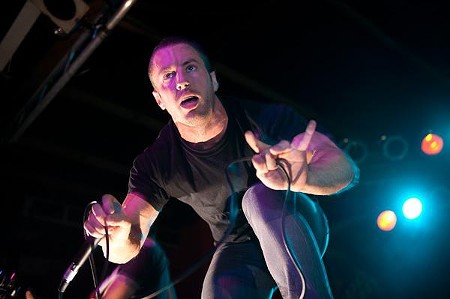 (Via metalinsider.net) As everyone knows by now, Mark McGwire admitted on Monday that he tried steroids throughout his baseball career. On the surface, this doesn't have much to do with the music industry. However, James Montgomery of MTV News found a way to tie McGwire's admission into music -- by penning a speculative piece. The gist? "For your witch-hunting pleasure, [here] are 10 artists we suspect are on the juice. Proof? Who needs it when you've got pure suspicion?"

One artist included was Dillinger Escape Plan vocalist Greg Puciato, who Montgomery says "is ripped enough for a man five-times his size, and though he's denied using steroids (he chalks his physique up to "eat[ing] a lot of protein and work[ing] out a lot"), we're still not entirely convinced." Puciato, unsurprisingly, was not amused. And issued a statement to the website Noisecreep. The entire thing is worth a read, but here's the gist:

Unfortunately for [Montgomery], they don't have 'writer potions' that he can take to better himself at his chosen hobby. While this isn't the first time that someone has presumed that I take steroids, it is the first time that I can think of that it's been publicly presumed. Although I usually take it as a compliment, it borders on slander when done in this way, and in actuality, it's more of a shame that we live in a time in which people assume that you need to cheat somehow in order to actually achieve anything worthwhile.

Read the rest here. Top ten lists are hard to do well; humor falls flat or what's funny in person comes across differently on the Internet. The MTV piece is a good example of this.