I Am the Only Person I Know Who Loves Korn 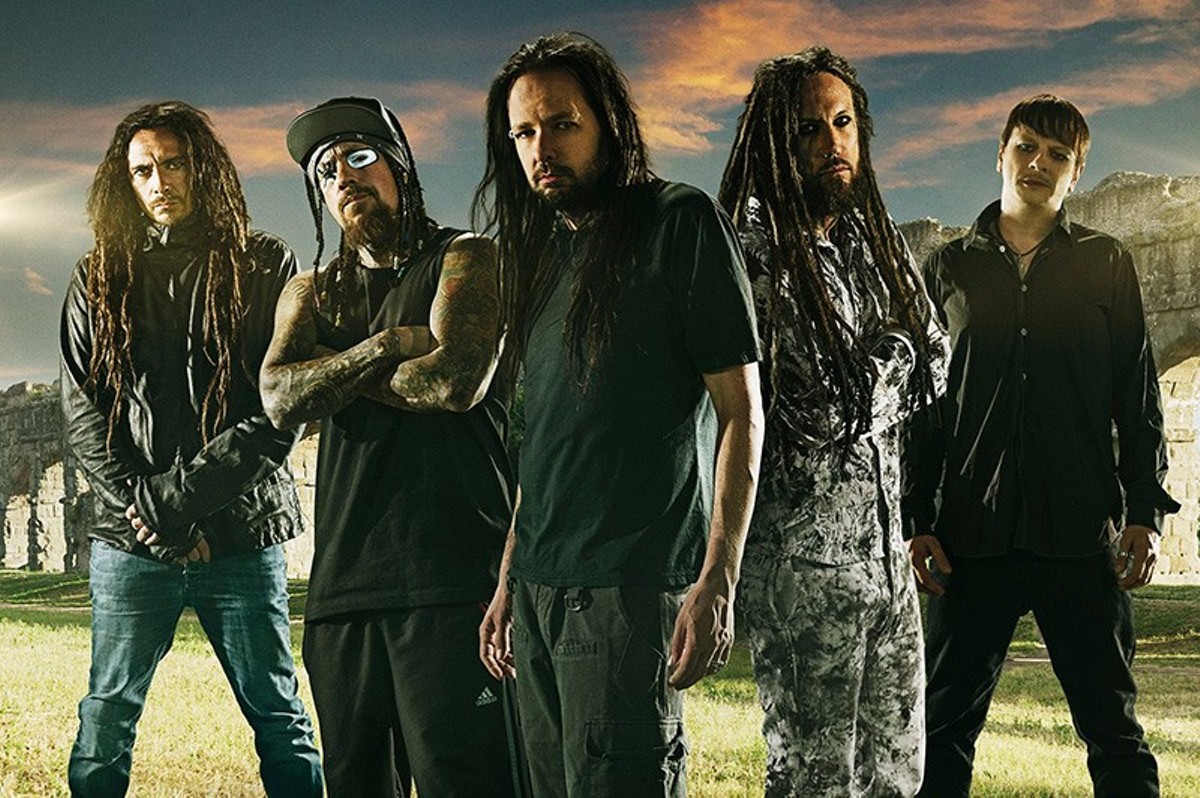 You might wonder if listening to Korn is a gateway drug to other nu-metal. From the writer's experiences: yes and no. Press photo via MSOPR

In a daydreaming moment, I imagine walking down the middle of Cherokee, all the way from Fort Gondo to Foam, wearing only a dashiki, two left shoes and a monocle for my right eye. Playing Hawkwind covers in the style of Pharcyde on a ukulele, I wouldn't get heckled once, not even by the kids shooting hoops at Love Bank Park. Bystanders would simply assume I was working up an act for next week's open mic at the Venice Cafe and, maybe, a few would tip a pint of Earthbound's Tree Bark Double-Pilsner in my general direction.

On other days, I dream of walking into the Mud House at 12:30 on a Sunday afternoon, this time sporting baggy cargos, a beat-up pair of Adidas shell-toes and a three-quarter-sleeve Korn T-shirt. My guess is that the line, stretching halfway to Off Broadway at that hour, would part naturally, allowing me to walk right up to the register like Moses striding across the muddy floor of the Red Sea. But before I could make an order of humanely harvested potatoes, the clerk would simply, wordlessly point me to the back door, through which I'd dejectedly walk — but only after members of So Many Dynamos pelt me with hyper-local tomatoes.

These are real visions, born of a torture complex deeply rooted in the fact that I Am the Only Person I Know Who Loves Korn.

You probably think of Korn fans as something like sixteen-year-old kid from Warrenton named Kyle, who works the same afternoon shift at Dairy Queen as his pregnant girlfriend Amber. But I want you to know there are more of us. That for every 15,000 Kyles, there's Thomas, a middle-aged, tea-drinking, Tower Grove East-living, Sanders-voting, former liberal arts college adjunct who, even during Korn's most popular days in the '90s, couldn't find a single student with whom to swap Korn stories.

It's likely that you think of yourself as Someone Who Doesn't Know Anyone Who Loves Korn. But you'd be wrong. You do know someone, and now you know it. So let me share with you my sad story, in easily digestible bullet points.

– I discovered Korn by taking up boxing, about twenty years after the age you can effectively take up boxing. While working out at stinking, sweltering gyms in my early 30s, I rocked out to early era Korn cassettes like Issues and Follow the Leader.

– This time period locked in one of the few truths upon which I'd stake my life: The best music for boxing training isn't rap, or blues, or jazz: It's nu-metal.

– Here, you might wonder if listening to Korn is a gateway drug to other nu-metal. From my own experiences: yes and no. Of course, I can hum along to the hits from POD or Crazy Town, and, sure, I own some Linkin Park CDs, but it's not like I can drop Slipknot quotes into random conversations. So don't assume the worst; you can live a quality, Breaking Benjamin-free life after repeated exposure to Korn. With discipline, it's doable.

– A small group of you might know someone who throws around references to Korn — noting, for example, that they were born of an earlier band called Neidermayer's Mind, circa the Bakersfield, California, metal scene of 1993. That's nice trivia to bat around, but is this person really a Korn fan? A few simple questions will sort that out. Are they on Team Silveria or Team Luzier? Were they fans before or after Woodstock '99? Do they understand that even within the dumpster fire of an album that was Korn III: Remember Who You Are, you can find the genius of "Oildale (Leave Me Alone)?" If they have answers, you have yourself a Korn fan — even if they're the wrong answers. If you want the right answers, ask me.

– What gives me the ability to provide you with the right answers? Well, I once spent ten minutes on the phone with longtime Korn drummer Ray Luzier, and he complimented the quality of my questions before the band's publicist cut the line. So that's my experience, thankyouverymuch.

– Also, I have friends, a pair of schoolteachers and good family men. They work for local music production companies during the summer months and occasionally serve as personal assistants for members of Korn when the group is here on tour. While I'll keep the really good stuff to myself, I can confirm that vocalist Jonathan Davis is, in fact, introspective and keeps to himself, while bassist Reginald "Fieldy" Arvizu is more gregarious and enjoys making Korn fans happy.

– (In that spirit: HEY, FIELDY! If you're reading this, can I get a backstage pass? HEY, FIELDY!)

– Speaking of spirit: While most of Korn's members have been born again, the band's recently been playing songs from its first album, including tracks like "Ball Tongue," "Faget" and "Clown," which aren't exactly filled with lyrics about the Coming Rapture. I'm not on the same team as Korn when it comes to the God stuff, but Korn's seemingly OK with us heathens keeping our places under the tent.

– To deviate back into the big picture, it's important to note here that friends matter. Just in general life purposes, not just Korn purposes. And, as you know, I Am the Only Person I Know Who Loves Korn. So it's hard to talk about some things, like why Zac Baird's not a full member and is always hidden from photo shoots. There's no one in my life to commiserate with about that weird period (during Brian "Head" Welch's too-long hiatus) when the band made all the side players wear animal headgear — what was up with that? I can't argue with anyone I know about why I'd include "Evolution" and "Never Never" on a classic Korn mixtape, while dropping "Y'All Want a Single" and "Shoots and Ladders." Does this aloneness ever hurt? You know the answer.

– Now, here I am making a fuss about being TOPIKWLK, but that doesn't mean that no one knows I love Korn. A select few do. Often, when they find out, they send me a hilarious video from YouTube titled "Guy with cornrows eats corn while listening to korn." Even my editor sent me the video when greenlighting this piece. And that's totally cool. Every time I watch it, it's like I'm a baby watching the dancing waves of the sea, or a kitten introduced to a ball of yarn. I'm transfixed, because it's just that good. You can send it to me now and I'll watch it and it'll feel like the first time, like the very first time.

– On August 9, Korn will be in St. Louis, along with Rob Zombie, for the "Return of the Dreads" Tour. I imagine going to the Hollywood Casino Amphitheatre that night in a pair of baggy cargos, a beaten-up pair of Adidas shell-toes and a three-quarter sleeve Korn T-shirt. There, thousands of Kyle-and-Ambers won't give me so much as a second thought — other than to find it cool that old people listen to Korn, too.