I Kinda Like It: Tales of an Arcade Fire-Ambivalent Music Journalist

Jaime Lees
Win Butler of Arcade Fire in 1999 or 2000. (No, he didn't always dress like Brendan Fraser in Encino Man.)

We music writers are often encouraged to argue our musical tastes in black-and-white terms. Not only does it make for a more interesting article, but hard-stance or scandalous opinions prompt conversations and an interesting, interactive online comment section.

One band that every music journalist seems to have a big, unalterable opinion on is the Arcade Fire. Love it or hate it, this band seems to have prompted the most spilled ink and fevered nerdy debates of any modern group.

I consider myself an Arcade Fire agnostic -- after all of these years of exposure it's like I still need more proof before I can commit to an opinion. Not only do I feel pulled in two different directions when I think of the band, but my views are wrapped up and twisted in my own personal history and the kind of "full disclosure" experiences that journalists are meant to avoid when writing objectively.

See, I spent a decent amount of time with Win Butler, singer for Arcade Fire, when I was just a teenager. He attended Sarah Lawrence College in Bronxville, New York, with a friend of mine whom I visited frequently. (I mostly scheduled my trips around when I'd be able to attend Echo & the Bunnymen concerts in Manhattan, just a short train ride away. I've always been weird.)

I visited SLC a few times in a two-year period during 1999 and 2000. Sadly, the friend I was visiting seemed to always be ill when I arrived. (Once because she'd had surgery and a couple other times because of what I now recognize as probably alcohol poisoning.) In any case, when she wasn't available I spent a lot of my time on the East Coast being babysat by her excellent friends and dorm-mates who were kind enough to let me tag along with them. They took me into the city and offered to be my guides so that my seventeen- or eighteen-year-old ass wouldn't get into trouble.

Sarah Lawrence was (and probably still is) a school for the freakishly ambitious, the insane and the insanely privileged. It was one of the most expensive colleges in the country during the time that I visited, and it has maintained that standard. (Total undergraduate tuition and fees are currently estimated to cost over $66,000 per year.) Honestly, it's one of the most ridiculous places I've ever been. The school was known for not giving grades, working on a pass/fail system and letting students "explore" and invent their own "concentrations" instead of committing to a major. This meant that most SLC students basically blew through around $200,000 of their parents' money while they fucked off for four years.

Everyone seemed lonely and bored on that campus, too, but this worked in my favor when I'd hop off a plane and needed a companion -- and one of my favorite babysitters was Butler. I liked him because was a total sweetheart and a big Cure fan. He sometimes had the Robert Smith hair and everything. He seemed to wear mostly black, and despite what the picture above might indicate, no, he didn't always dress like Brendan Fraser in Encino Man. (I took that photo at a dress-up dance party.) He was geeky, shy and mega nice. And very, very tall. Whenever he took me into the city I'd always be jogging to keep up with him because my short legs had to take an average of two and a half steps for every one of his. Our adventures were always exhausting.

He left SLC sometime in around 2000 and took off for Canada. The next time I saw him was when his new band, Arcade Fire, toured the Midwest in 2004. I saw the (now-legendary) St. Louis show at the Rocket Bar and another one in Columbia at Mojo's. I'd heard his demos and liked them, but I still thought I was going to see some stupid college band. To my surprise, they arrived in town fully formed, and the music was impressively passionate. Arcade Fire was opening for the Unicorns and played for a very small audience at both of these gigs, but by the next year the band was on a main stage at the revived Lollapalooza festival in Chicago. 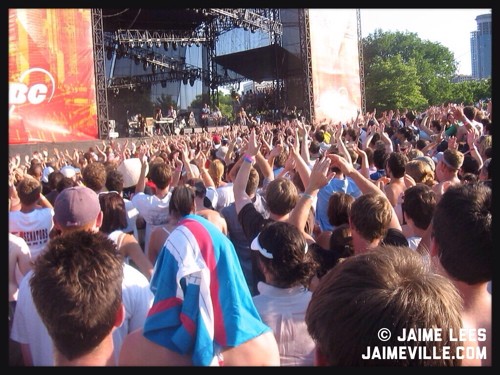 The vibe backstage at Lollapalooza was intense. Gone was the joyous, silly kid who had shown me around New York City. He'd been replaced by a guarded grown man under intense scrutiny. The pressure was palpable. It was the hottest Chicago summer in decades and Butler sat at a table under a white tent, and we all tried to enjoy some delicious catered pumpkin ravioli while his handlers were attempting to pull him away to do this or that. None of that tension was visible from the stage that day, though. The band played in the blazing heat and impressed the thousands in the crowd. They all seemed more relaxed after they played, but the responsibility was still great. I watched the band be interviewed by MTV and realized that their lives had completely changed.