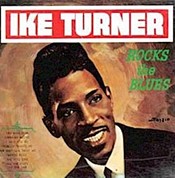 On Sunday, September 2, 2007, St. Louis Mayor Francis Slay will declare it “Ike Turner Day,” from the main stage of the Big Muddy Blues Festival on Laclede's Landing. Turner, a former St. Louis area resident who made his mark on the American R&B and rock 'n' roll scene, will headline the festival main stage at 9 p.m. Prior to his performance, Mayor Slay will present the legendary musician and Rock & Roll Hall of Famer with a proclamation in honor of his storied career in the music industry. Turner won a Grammy Award for Best Traditional Blues Album in February 2007 for his latest release, Risin' with the Blues.