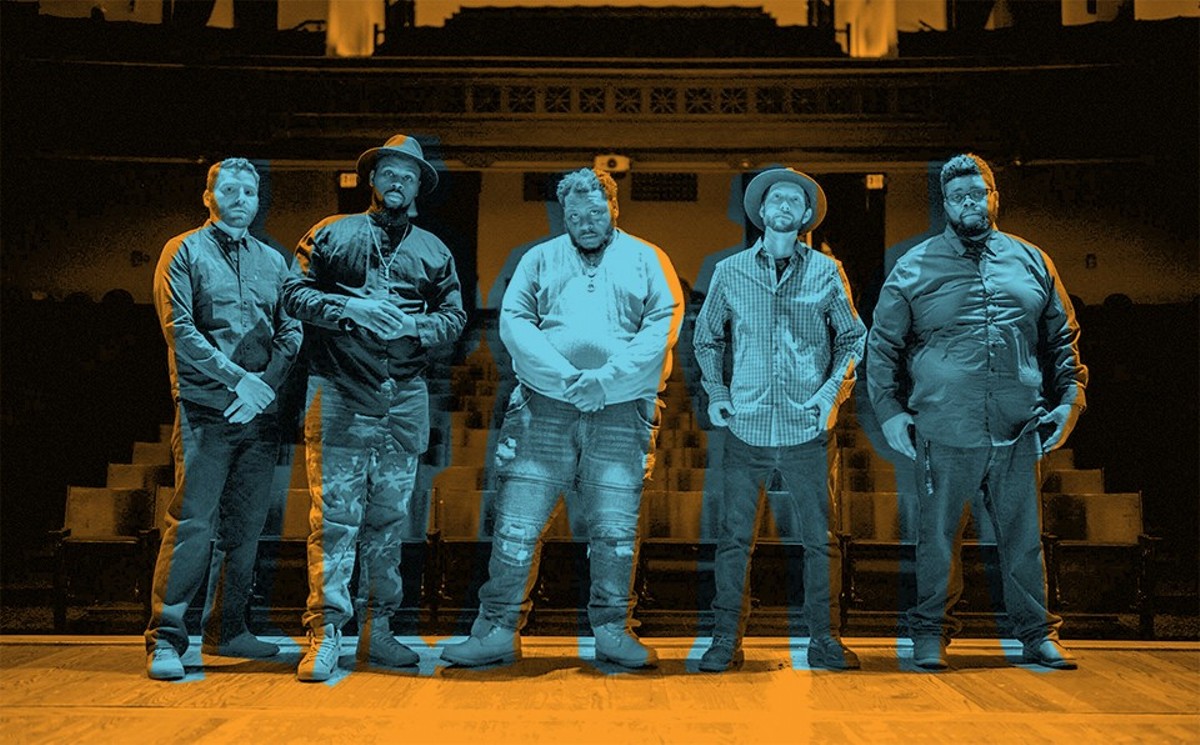 Hip-hop band iLLPHONiCS has seen its sound evolve over a dozen years. Now a superstar producer is fine-tuning it. VIA IMPULSE ARTISTS

The latest music coming from the long-running St. Louis hip-hop band iLLPHONiCS runs at a lean six minutes and 45 seconds, which might not seem like a huge amount of material. But what the new release lacks in quantity, it makes up for in quality, with a special assist from a big name in recording.

Brooklyn-born Tony Visconti enjoyed long runs as a producer for both T. Rex and David Bowie, while collaborating with a strikingly diverse list of rock & roll artists including Iggy Pop, Adam Ant, the Moody Blues, the Damned and various members of Yes during their solo outings. Dozens of artists deep, his list of production credits is rich and varied and now includes time spent at SmithLee Productions in St. Louis with iLLPHONiCS.

The band consists of Larry "Fallout" Morris, emcee and lead vocals; Keith Moore on keys and vocals; Kevin Koehler on guitar and vocals; bassist Simon Chervitz; and drummer/vocalist Chaz Brew. Together, they've just offered up a pair of songs — "Work," "Make Your Move" — under the banner of Dv8, Pt.1, the first in a small series of EPs informed by Visconti's ear.

Reached by phone, Morris and Moore are effusive in their praise of Visconti, while noting that they were going to be releasing music this year even before he signed on. (SmithLee's Justin Fisher, they say, did much of the heavy lifting.) That their new release comes with Visconti's stamp of approval is a bonus. A bonus, too, was the fact that they were working with someone who came across as a normal kind of fellow.

Visconti approached them, Morris says, with "the idea that 'I'm just here to work with what you're doing.' ... He was super laidback and didn't come in to bully us around. 'You guys have already got it; let's refine what you're doing.' We worked together until we found what we liked."

"It was like hanging out with a regular dude," says Moore. "He wasn't pretentious or stuck up. Just a regular guy with a passion for music."

Koehler, who idolized Visconti, faced maybe the toughest task: attempting to live up to the standards that he assumed he needed to bring to every studio performance. But while the remaining members were without that level of keyed-up expectation, they did make sure to come in with t's crossed and i's dotted.

"Most of the tracks we brought to Tony were 75 percent complete," Morris explains. "We had a good idea of what we wanted to accomplish and he added his touches and polish."

With an all-original membership dating back over a dozen years, iLLPHONiCS has been able to stay true to a basic aesthetic, even while adapting to new recording approaches, musical styles and the current influences of its membership. (Older tracks are influenced not just by hip-hop, but rock.) Visconti appreciated the band's willingness to change up its sound, Moore says.

In the beginning, Moore recalls, "We were a pure live band, rehearsing for two to three hours, four to five days a week. In that time, playing music together gave us such camaraderie. Playing together is like having muscle memory." And Visconti picked up on that. Says Morris, "You come to an iLLPHONiCS session knowing that we are a group."

Working with Visconti inspired the band's members to return to those roots. "We're not changing our sound or subject matter, but we want to be touring, even in this day and age. I think the biggest thing we took out of this is our being in St. Louis for thirteen years. We've really started to look outside of this market, set up our satellites. There's only so much original music you can play in this town and we've been looking more towards the South. We'll gain more confidence being on the road and in other markets."

Meanwhile, the Visconti tracks will keep coming. For at least another season.

Dv8, Pt. 1 is available now on Spotify, Bandcamp and other services.