In Defense of JJ’s Clubhouse and Queer Joy 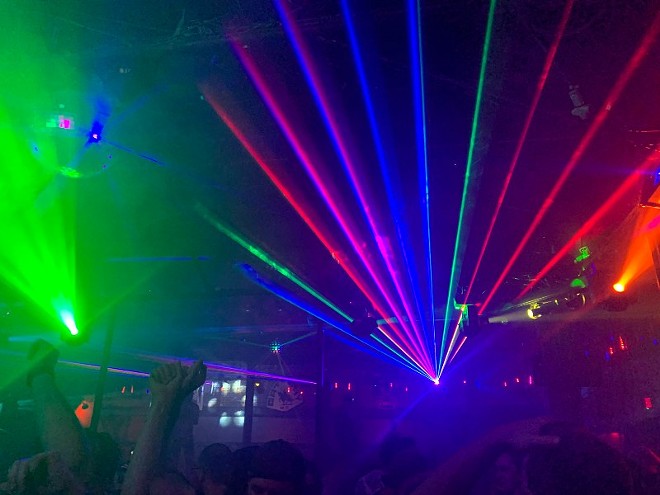 JANIE STAMM
Janie Stamm captured this image during her farewell to JJ's Clubhouse.


This is a response to counter Elizabeth Van Winkle’s article titled “Reckoning With the Legacy of JJ’s Clubhouse on Its Last Night.” Truthfully, I went back and forth with how I wanted to proceed. A photo of me was featured in the print article and in an online slideshow, to which I consented. What I did not realize was that Van Winkle had planned on writing a piece that would be a scorched earth takedown of JJ’s, a place I have treasured dearly.

Van Winkle stated within the piece that she had sought out to capture images of “leather women, trans folks and people of color,” which left my partner and I feeling grossly objectified and unsettled. The article left me feeling as though because of my identity as a queer dyke that I was unable to enjoy myself at the bar. I’m not here to invalidate anyone’s experience at JJ’s (both good and bad) and therefore I can only speak for myself when I say JJ’s was a second home to me in which I felt safe and cared for.

This is a love letter to JJ’s:

JJ’s Clubhouse and Bar opened its doors during the heart of pride season in 2000. Housed in a former garage and theater drapery manufacturing building, JJ’s was established as a leather-and-Levi’s bar, which over the years evolved into a space that welcomed every type of person. JJ’s served as headquarters to both Blue Max CC and Gateway MC, two queer motorcycle clubs, and Show Me Country Dance, a queer line dancing organization that I am a part of.

JJ’s was a little slice of queer paradise underneath a highway overpass. It was a safe space to exist as a queer person (out or not) for it was just far enough off the main Grove drag to ward off most bachelorette parties. With the scent of poppers wafting through the air, one could dance the night away in queer bliss against the bar’s greasy aluminum tread wall. JJ’s gave me life. The dance floor was euphoric.

The last time I went to JJ’s was June 17 for the closing party. The bar was just a few days shy of turning 21 years old before it was sold; a monumental amount of time for a gay bar.

Around 5 p.m., the dance floor opened and I walked in with some of my line dancing friends. A room of JJ’s relics awaited the final night patrons. Tables with piles of vintage gay smut books, condoms, lube and liquor brand promos were all free for the taking. I found a crumpled up pride flag on one of the tables. It’s dirty and the flag’s corners have staples embedded in them, but it has now become one of my most precious objects. It lived at JJ’s and embodies the essence of the bar’s history in its woven fibers.

I spent the rest of the night worshipping the dance floor. My body swayed under the glittering disco ball. Kevin, the lighting designer for JJ’s, put on a laser light show for the gods. I wept as DJ Walter played “Last Dance” by Donna Summer to close the night.

I ran up to Rich, one of the bartenders and someone who I consider family, and he gave me a hug filled with love, and I cried even more. Jerry Jurak and Jeff Plunk (the owners) waited at the doors and hugged and thanked every single person that was there that final night.

To Jerry and Jeff: Thank you for building JJ’s into the palace of queer love that it was. It has been the only queer bar in which I have ever felt truly welcomed. You both created a St. Louis treasure that made me (and I’m sure a lot of other people) proud to be queer.

To Rich: (If you could only see me struggling to write this.) You mean everything to me. My favorite part of coming to JJ’s was getting to see you behind the bar.

Janie Stamm is a queer St. Louis based artist and craftivist.