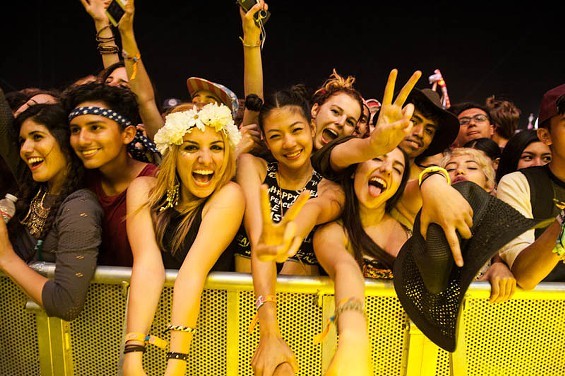 Timothy Norris
Coachella kids, some of whom are surely sober.

Oakland resident Kimchi Truong was 24. She passed out on the Coachella grounds last weekend, likely due to an overdose. Her death, Thursday, was shocking. But what's really shocking is that this kind of thing doesn't happen more often.

This story is about very young people doing a shit-ton of drugs, but let's start with the old folks of the Coachella Valley. Fooling themselves into believing they're not going to die, they populate ticky-tacky communities behind guarded gates, with giant televisions, preposterously lush lawns and mammoth green hedges. They've bought into the illusion that this is a lush paradise, rather than a punishing desert that will remain hospitable only as long as politicians willingly waste the diminishing stash of Western water. The men, who are tan, and the women, who take walks in the morning, came from greater L.A., arriving to places like Indian Wells and Palm Springs to escape the smog, traffic, crowding and chaos.

How betrayed they must feel, then, when the Coachella Valley Music and Arts Festival brings the riff-raff back to their doorstep for two weekends every year - the biggest, most unruly traveling circus imaginable.

Marked like convicts with green, yellow and blue wristbands, the young people are regarded with distrust. With good reason: They make only the slightest effort to assimilate into their temporary communities. Drunk on their parents' money and preparing to descend into squalor, they rent houses or apartments for $400 or more per night, cramming each room with three or four of their best friends, laying down sleeping bags they'll barely touch and stocking the fridge with water they'll forget to drink. Upon arrival, they immediately break out the vodka, or the molly and blast off: Coachella is their Christmas, the greatest time of the year, as much for the chance at unsupervised recklessness as for the festival itself. (Many won't even make it inside.)

"It's common for my friends to wake up, start drinking and taking Adderall," says one early-twentysomething festival veteran. "Then they mix acid and molly together in a water bottle and take that into the fest. They drink this mixture throughout the day and night while continuing to supplement it with booze, weed and Adderall. They'll lick their fingers and dip them into bags of molly." 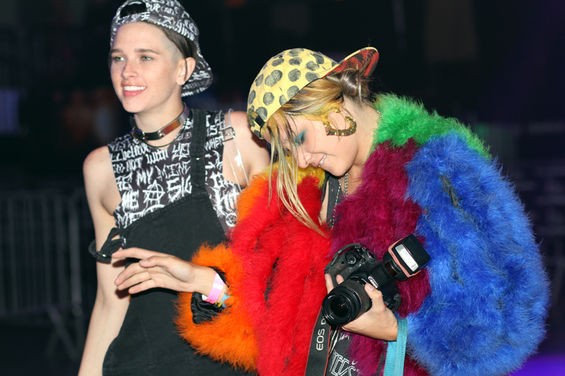 The thrifty ones don't even purchase tickets to the festival, instead hitting up the Valley's exclusive parties timed to the event, flush with celebrity DJs, rappers, fashion designers, models and young millionaires. At these parties, branded within an inch of their lives and held at places like the Corona Yacht Club - whose signature feature is a freshwater lagoon - the drinks, kale salad, gummi bears and Aerie-brand bras and panties are free. The girls, having dieted for months beforehand and brainstormed outfits that will make them not, technically, naked, travel in packs, the guys inflate their resumes. Absolutely everything is photographed.

When the parties end the kids drive home, at the mercy of their oft-failing GPS systems, drunk out of their minds. But though it's well past midnight it's not too late for psychedelics, chocolate-covered mushrooms or Sour Patch Kids laced with LSD. The drugs, combined with a lack of sleep, lack of food (In-N-Out Burger is closed, yo), and a general, half-assed sense of artistry inspire all sorts of late night shenanigans: impassioned guitar performances, EDM dance parties by the pool, impromptu outdoor photo shoots with old-timey popping flashbulbs.

By early afternoon the next day it's time to go into the festival, and despite last night's insanity the kids are far from depleted. (Before long they'll have sinus infections and crushing depression, but that's still days away.) And so they head over to the Polo Grounds, only sometimes remembering to pack sunscreen into the fanny packs they've brought because their swimsuits don't have pockets.

They have, however, remembered to stash drugs on their person and in just about every orifice.

"Guys smuggle joints and molly by putting them in a plastic bag and then taping the bag with duct tape in between their legs, between the ass and the balls," says the twentysomething. The way to get coke into the festival is either by putting a small baggie in the tiny pocket of your jeans, or else inside a necklace. Says a female college student: "Girls use a bullet necklace or cylindrical cross, which they fill by unscrewing the bottom. No one thinks to check for coke in a necklace."

Ben Westhoff is the author of the books Original Gangstas, Fentanyl, Inc., and Little Brother: Love, Tragedy, and My Search For the Truth.
Read More about Ben Westhoff
Scroll to read more Music News & Interviews articles (1)