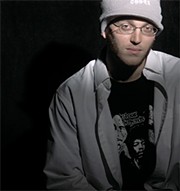 Earlier this week, we reported on a new hip-hop night taking place Wednesdays at Queen of Sheba and promised more information on Integrity, the new project helmed by DJ Trackstar, Tech Supreme and Finsta. Without further adieu, here’s the scoop on the new night – whose debut is tomorrow, Saturday, July 21, at Blueberry Hill’s Duck Room. DJ Trackstar reports on this and the slight changes going on to his own Halo Bar Friday night spin:

What is the significance of the name Integrity? That's what our night is going to bring to the table. We aren't going to tolerate wackness, or play political games that reward artists whose music isn't cutting it but have a good "hustle" behind them. You can't buy your way onto our stage -- whether with money or fame. If you hit the open mic, you better come nice or you will be clowned. If your music isn't up to par, you won't make it into the Battle of the Beats, and you won't be performing on Saturdays at Blueberry Hill. We are raising the bar for hip-hop artists in St Louis and challenging them to tighten up their raps, their beats and their performances.

Is this in the Duck Room or Elvis Room? Hours? Charge? Dress code? Age limit? It will be starting in the Duck Room for the first few weeks, then it will alternate between the two depending on Blueberry's other bookings that night. 9 p.m. to 1 a.m., $5 at the door for fellas, free for ladies all night. No white tees. 21+

How long has this night been in the works? Finsta and I have been scheming on a new hip-hop night since M.P. O'Reilly's shut down, but once Halo Bar switched formats, I saw an opportunity, made a proposal to Blueberry Hill management, and brought Tech Supreme in along with Finsta as partners to promote and run Integrity.

Describe what the night will include -- you said performances, open mic, battles, etc. Anything more specific? Guests? Is there a specific format? What will patrons be able to expect on a normal night? Our weekly hosts will be Tech Supreme (87 Billion Dollar Click/producer extraordinaire) and Finsta (Ruckus Crew/long-time Hi-Pointe Cafe host), but we will have guest hosts on occasion. Trackstar will be your DJ most nights, but I'll be putting some of my colleagues on as well from time to time. At 11 p.m. each night, there will be a battle of the beats -- essentially a crowd-judged contest among four producer/beatmakers whose beats will be selected earlier in the night. The winner will remain champion until the next week, when he or she will face three new challengers. At 11:30 p.m. there will be a different performer each week. July 21 (the first night) we will have two: Black Spade and Family Affair. From then on it will be one per week. At midnight we will start the open mic, where anyone in attendance is welcome to spit and test their skills.

What do you guys want to achieve with this night? What sort of impact do you want to have on the St. Louis music scene? We just hope to bring another round in the legacy of St. Louis hip-hop nights -- carry the torch from the HPC to the Science and continue on to the next generation. Since the Hi-Pointe shut down, there hasn't been much in the way of a consistent venue for local hip-hop artists to sharpen their skills and network. We are trying to bring that back to the hip-hop community.

There has been quite a lot of...not turmoil, exactly, but transitions within the hip-hop nights in the community lately -- with venues closing, nights shifting styles, etc. What's been the biggest challenge for you and the scene, within this period of change? The biggest challenge is keeping the patrons from the club who are not there to have fun and be constructive and enjoy the artform of hip hop -- which itself is a positive culture and artform. Unfortunately the foolish actions and attitudes of the few have ruined some of the great spots in St Louis for the many who act right. There have been a few spots on the loop that have been somewhat sabotaged by the appearance of an element of society that seems to be WITHOUT the type of Integrity we are trying to foster at Blueberry Hill on Saturdays. We have ample security in place, and plenty of experience with crowd control, to where the unwanted elements will be discouraged from attending implicitly -- and, if need be, explicitly.

Why did your night at the Halo Bar change formats? The vibe had changed over the last six months to a year, from more of a hip-hop lounge setting with a small dancefloor to an atmosphere that felt more like a club. I heard that some of the more rowdy clubs closed, and with no cover, my spot was a good place for them to come hear "harder" hip-hop than at most other venues. A small percentage of what I play fits in that category, but I guess if it was the only spot they could hear it, they were willing to tolerate the Lupe Fiascos and Commons of the world to get to the half-hour of Lil’ Wayne and Dipset. Halo Bar Fridays ceased to be as comfortable and welcoming to as wide a crowd as management desired, and I couldn't really argue -- because my own friends had lodged similar complaints. Now the spot retained its hip-hop flavor, but lost some of the rowdier and clubbier vibe. I am playing a mix of soul, jazz, funk, rock and reggae based on the tracks that hip hop has sampled over its 30 year history, as well as a few choice hip-hop gems interspersed in the mix.

What's going to happen to the Hi-Pointe Cafe? Are there any plans to re-open at another venue? We are still looking for a spot to reopen the HPC. Unfortunately Monday nights are a tough sell to club owners, but I'm confident we'll get it back going again before too long.

How can people get more information about the night? www.myspace.com/integrityatthehill or [email protected]