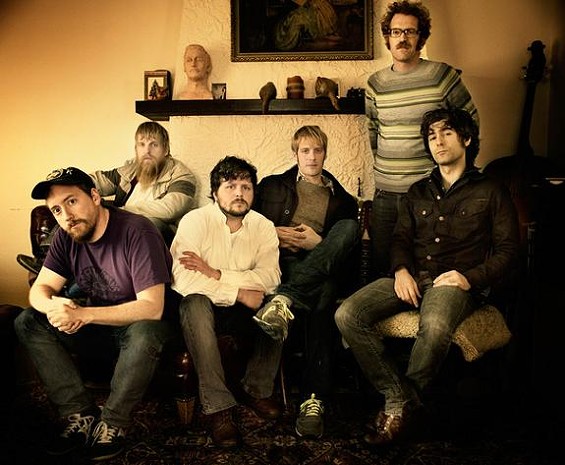 Eric Earley started Blitzen Trapper with just a guitar, his Portland basement studio and an insatiable desire to create. After its 2007 breakthrough, Wild Mountain Nation, the band jumped into a life of vans, planes, festivals, and opening slots for Wilco, Fleet Foxes and Iron & Wine. Miraculously, Blitzen Trapper has found the time to craft solid records such as Furr and this year's remarkable Destroyers Of The Void. Eric Earley spoke to the RFT in advance of Blitzen Trapper's first St. Louis headlining show at Off Broadway on Monday, June 21. The band will also be doing an in-store at Vintage Vinyl at 6 p.m.

Ryan Wasoba: Last time Blitzen Trapper came to town, you were opening for Stephen Malkmus and the Jicks. I remember you came out for an encore with them and closed with a cover of James Gang's "Funk #49." Then Destroyers Of The Void came out and there's a total classic rock vibe to the record. Coincidence? Eric Earley: There's definitely a lot of that influence on [Destroyers], mostly with the production. It's by no means a riff rock record, but I just wanted to make something that has a warm, familiar sound to it.

Was the creative process different from your last two records, Furr and Wild Mountain Nation? Not really. I always write songs by myself with a guitar or piano and then book studio time and experiment. I've been doing it that way for years. The sound changes just because I don't want to do the same thing over and over again. And I never really stop writing, so the songs always kind of fit together between records.

I know the band began as a studio project for you. Now that it's a full, active six-piece band who tours constantly, has that changed your dynamic? As far as writing, no. I kind of write and arrange in the studio for the people in the band. Most of our stuff isn't too hard to play. With six guys you can do a lot with samples and keyboards and stuff. With touring, the only difference is that you don't have as much time to yourself.

The title track to Destroyers is far and away your most ambitious track to date. You said your stuff isn't that hard to play, but that seems like a daunting task to pull off live. It's taken us a little time to get it, but it's pretty close now. "Destroyers" is definitely a tricky thing to play live. It was originally three different songs I was working on and couldn't get them to work so I thought maybe I'll stick them together.

Isn't that how "Paranoid Android" and "Happiness Is A Warm Gun" were written? I've heard that, but I'm not positive. I took the three songs into the studio and put them together and rearranged it as an epic, concept-record-type track. It's kind of an experiment and it kind of just worked, we were....[Eric becomes distracted by laughing and car horns in the background]

It sounds like some shenanigans going on over there. Yeah, well we're in the van on our way to Atlanta. Our opening band Moondoggies just pulled up so we were jokingly racing them. They didn't realize there was a stop sign and they just ran through it.