Interview: Ellen Cook, a.k.a. Local Piano Songstress Ellen the Felon, Opens Up About Her Songs and Playing with Amanda Palmer 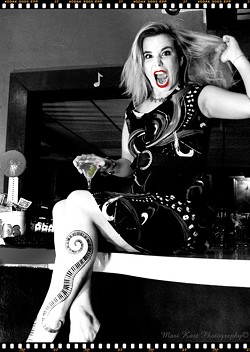 Those fans who will flock to the Pageant on Sunday night for Ben Folds' sold-out concert should consider staving off the start of the work week a little longer and stick around for Ellen Cook's after-show concert at the Halo Bar. Cook, a pianist and singer, performs around St. Louis as Ellen the Felon with drummer Matt Reyland. Her music is an amalgam of jazz piano confessionals, cabaret dramatics and equally seductive and snarky balladry.

Her set on Sunday night will be her second at the Halo Bar; the first came on November 16 of last year following a reunion set by the acclaimed piano-and-drums duo the Dresden Dolls. And even though Cook has high hopes for the performance, it will be hard to top her previous set. Dresden Dolls lead singer and pianist Amanda Palmer - one of Cook's musical heroes - joined her for an impromptu set during the after-show concert.

It was a bright moment in what has been, by any measure, a horrible year. In the early hours of Sunday, August 1, Cook and her boyfriend, Dave Hagerty, of the beloved local band Fattback, were struck in a hit-and-run. Hagerty died the next day from injuries sustained the accident. The loss to the St. Louis music community was immediate; the loss to Cook and Hagerty's family and friends was immeasurable.

But the trauma of that event hasn't slowed down Cook's drive or musical ambition. To hear her talk, the tragedy has only spurned her forward. In addition to performing original material, Cook, 25, hosts two open mic nights around town, on Monday nights at the Venice Café with Miles Long and every Wednesday at Foam with Langen Neubacher. Her role as host of the open mic at Venice is especially poignant, as Hagerty had hosted at the venue with Long for the past few years. "It's a little weird; I feel like I have big shoes to fill," Cook says.

Before an open mic session at Foam, Cook sat down to talk about her upcoming gig at the Halo Bar, her interaction with her idol and the therapeutic value of songwriting.

Christian Schaeffer: How did you get hooked up with these after-shows at the Pageant? Ellen Cook: Through Sleepy Kitty, because they opened up for the Dresden Dolls show. The Pageant was looking for a band to play the after-show. It was surprising; they asked a lot of other bands that probably have a bigger name than I do, but they didn't have a two-hour set. Matt and I have over three hours worth of originals these days.

So you fit the bill for the after-show. Totally. I've been listening to the Dresden Dolls since forever, since "Coin Operated Boy" came on the radio and I felt in love with it. Oh my gosh, to get to meet Amanda Palmer: So I'm halfway through my set and I look over to the end of the bar and there she is. I say to myself, "No, that can't be Amanda Fucking Palmer, that's gotta be one her stupid fans that dresses up like her and has weird eyebrows." And then I realized it really was her. That was incredible to get to play with her.

How did that come about? She was listening to our set. I was surprised to even see her out there. I walked up to her and said "Hi, nice to meet you. I'm your biggest fan." I could barely talk. So Matt and I take this little break and she's up there taking pictures, up on the stage, and I just went up and started playing one her songs, jokingly. And she just stopped and looked straight in my eyes and said, "Do you wanna play that song with me?" Uh, yeah! She said that it's been a while since she'd been on the drums, so she got up on the drums and played it and sang harmony. I think the song was "Miss Me."

And then I told her the back-story to my song that we played, which is called "Bang Bang Bang." It's a song I wrote shortly after the accident I had with Dave; it's about the guy that hit us, and she played that. She's really humble and awesome, kick-ass person. I hope that if I ever tour nationally that I can be as humble and neat and down-to-earth. She's not a bitch!

So they asked you to come back for the Ben Folds show. You seem to be jumping on these piano-based after-shows. Yeah, I have a heavy left-hand and I'm not out singing Sarah McLachlan stuff.