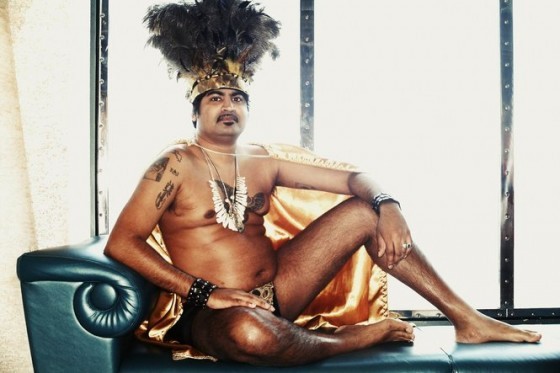 Arish Ahmad Khan, known to his loyal fans as King Khan, is frontman for King Khan & the Shrines, the King Khan & BBQ Show, the Black Jaspers, the Tandoori Knights and an honorary member of the Spits, to name just a few of his current bands. On his ability to transform himself and his style to suit whatever the situation calls for, Khan says he "feels like more of a magician than a musician." King Khan will be at Off Broadway  (3509 Lemp Avenue, 314-773-3363) with the Shrines June 15 and will return with the King Khan & BBQ Show on September 15 at Ready Room  (4191 Manchester Ave, 314-833-3929).

We had the great pleasure of speaking with this sorcerer of soul for this article from earlier this week, but there was so much more to the conversation that we thought it would be worth sharing more -- here's what was left on the cutting room floor.

Jenn DeRose: You've spoken publicly about a mental breakdown you suffered after losing some friends and the [temporary] collapse of the King Khan & BBQ Show. You've also been candid about your recovery. Was talking so openly about these personal crises a conscious decision?

King Khan: I think you have to share these kinds of things. You never know who, unconsciously, you are helping. My friend that I'd lost, well, I wish he'd gone and seeked help rather than go down the dark spiral. What I do musically, I've always felt that there's a spiritual reason that I do it. I think that if people can learn from mistakes or see a path of hope in what I do then I think it's a good thing.

I was wondering about the music video for "Bite My Tongue." Are you involved in the writing, or is that left to the director?

I wrote the whole script, actually. I started making music with this guy Rummelsnuff and we became really good friends. At the same time I asked him to be in a band with me, Hylas Films, which is a filmmaking group, they asked to do a video for him. That's how I got introduced to them. When I met these guys, it felt like meeting the perfect people to carry out my visual ideas. When I wrote the script for "Bite My Tongue" it was so absurd, but when I showed it to them, they were like, "Yes." The "Born to Die" video is also made by them. For me, it was like I found the perfect group of artists. When I work with them, I can give them the most absurd, crazy idea, and it's a reality. So they're not like, "oh, that's too hard to film." When we work together, it's the first time that I've found what I like to call the "path of least resistance." I think, now that I'm a bit wiser, when I'm trying to create things, I find that The Path of Least Resistance is often really the best way to go because it's so unstressful. It's a harmonious thing when we work together. Sometimes we'll switch around directors, or writing. I love working with those guys. We're gonna try to make a full length movie sometime next year.

I loved the Jesus-squirting-wine-from-his eyeballs scene.

[laughs] My grandma even loved it!

I saw you dancing at a basement Spits show in 2011. Was that around the time you became an honorary Spits member?

It's funny. I was once in this band called the Spaceshits, and we were supposed to play with the Spits back in 1993 at a birthday party in Seattle. So that's kinda how far back our relationship goes. They're brothers. I became an honorary member because they were asked by a German label to do a recording of their first single, but in German, so they contacted me and were like, "Hey, we want you to sing our songs in German." I was just super honored, and I said in exchange I wanted to get a Spits ring, and I wanted a backpatch and I wanted to be an honorary Spits member. So that started that whole thing. And also I got a tattoo of Shawn and Erin's mom's name on my arm.

Because I'm the official Brown Son. Their mom is one of the most amazing people I've ever met.

Your daughter has a single out on Wacky Wacko, and I was wondering, does your family sing around the house, Von Trapp style?

Yeah, not Von Trapp style, but we do, like, sing songs. We have a family of great uncles, like the Black Lips, for example. When they recorded their Let it Bloom record, they were all sleeping in my living room when I first moved to Berlin. And my kids, they were taking them to the park and playing with them and stuff. They've known Mark Sultan forever, and in fact he was here when Bella was born. So yeah, they've grown up with incredible musical uncles. And Aunts. And they have the gene inside of them... But you know, I don't force them to do anything. I think that's why they can enjoy music. They see how much fun their dad has with music.

I'm camping right now, and we have this outhouse by the campsite. I walked in there this morning and almost got bit by a black snake. I thought of you because you used to call yourself Blacksnake [in the Spaceshits].

With the Spaceshits, we used to have a practice room in the Indian Reservation. I was in the reservation and I found this piece of paper, and it had all of these different names for the types of shits that you have. Actually, you know what, it was like an old Native practice. It was very important to look at your shit to know if you're sick or not.

While I was reading this thing about it I took a shit and I looked at it and it looked like a black snake, so I named myself Black Snake in the tradition of the Native Americans.

You named yourself after a turd. Who named you King Khan?

Well, Khan is my real last name, and King Khan is because back in the day I used to wear a German war helmet, a plastic one. I would go do daily things, like go shopping with it on. When I went to Hamburg the first time, all the homeless people kept calling me "Kaiser," and I was like, "Oh shit, I'm king in Germany."

Thank you so much for talking to me, it's been a great break from camping.

It's great that you almost got bit by a black snake.

No it's not! I really hope to not get bit in the ass by a black snake, but if I do, I'll think of you.