Interview Outtakes: Story of the Year's Dan Marsala Talks a New Album and His F**king Awesome Side Project

In this week's paper, I chatted with Dan Marsala, vocalist for celebrated local rock quintet Story of the Year. The band released its fourth album, The Constant, this week via Epitaph Records. It'll be having a CD release show on March 4 at the Pageant, and the only way in is to buy the record at Vintage Vinyl and pay $1.05. In the following outtakes, Marsala attempts to explain SOTY's longevity, variety -- and his lighthearted, vintage-punk side project, the Fuck Off and Dies. 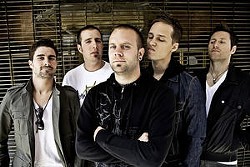 So I have to ask you about the Fuck Off and Dies. I just found this online, and I was totally digging the music. How long have you been around? How did that come about? It started out as a joke, about a year ago, me and a few of my friends. We were just hanging out one night and it was a total idea, like, "Yeah, we should start a punk band called the Fuck Off and Dies, because it'd be funny." We're like, "Yeah, yeah, that's awesome, all right, we're a band right now." It was just nothing.

And months went by and we just talked about it, we were like, "Yeah, remember our punk band? Yeah, that's funny." One day I started writing some demos because I had an idea, and made some really short, funny songs with the word fuck in them. I recorded them all - I just demo up stuff in the basement, have some other dudes come over and do some stuff. I just put them up on MySpace. Now we've been playing and stuff just on our off time, just for fun. I don't know, we'll probably play a show in the future. Since Ryan [Phillips] and Phil [Sneed] have Greek Fire going as their side project, I had to do something fun. But I'm doing old-school punk stuff. I figure, what better way than to make it kind of like a joke - but not?

The songs are actually good. It's a joke -- but these aren't shitty songs. That was the problem - it was a joke, and then I wrote some songs and we were all like, "Wow, this is really funny, this is really good, actually. People will like this." And then everybody started loving it. And now it's like, all of our friends especially, it's like the best thing they've ever heard. So it's really funny. That's the best part about it - you don't have to take it seriously, because you're singing songs about the dumbest stuff ever. But it's actually more fun. I always find that joke music is just a little more fun sometimes.

My favorite songs [on The Constant] were "To The Burial" and "Dream Is Over." They struck me as very brutal. I think that would surprise people that you wuld have that, people who might only know your radio singles. I like that about the record. We definitely always try to have that variety of stuff, we've always had a bunch of heavy stuff along with our poppy radio songs. It does surprise a lot of people - and probably confuses a lot of people. They're like, "I don't know what kind of band they are. It's really weird - they play fast, punk, hardcore songs and halfway-metal songs, and they have piano ballads and radio tunes." We're a little confused, but it keeps it exciting for us. It keeps us from getting bored, ever. We can pretty much pull off anything we want within a certain area. We're not going to try rap songs or country songs anytime soon...

You guys have been around for nearly a decade now, and you've kept your fanbase and even grown it. How do you explain it? I don't really know, but I think a lot of it is just being a good live band and being a band that actually plays your songs well and goes out and works hard. Live music is still a huge part of where music's going to go and what's going to always be important. The live show, you can't duplicate that - if you want to go see a live band play and experience that, you can't send that over the Internet.

I know a lot of our fans are just actually more into just seeing us live and being at shows than they are into listening to music. It's a big part of it. That definitely keeps fans around a lot longer. That's the bands that I still listen to from whenever I was a teenager - the bands I used to go see that were really good live, and I loved the shows and they got me that much more into the music. That's the only thing that I know that has helped us over the years, more than just writing the songs that we write and trying to be good at that. That only gets you so far.