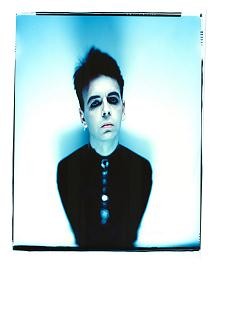 But CGI is a lot of fun. I'm working on packaging now for this guy T-Pain, and he's got plenty of money to do what he wants in CG. So we're gong to build crazy, steampunk futuristic suits on him - and all in CG. All fake. That's such a different mindset and a different way of working. As a writer, so much of what we do has shifted online, and that's a completely different mindwest too. But I don't think people in terms of photography, that yeah, technology and the entire genre has shifted as well. A lot of what's happening with photographers now, is we're expected to do motion as well as stills. That's a big push now if you talk to ad agencies and record companies. When I did the Korn packaging, we also shot a lot of it in HD, Canon HD, a similar set-up that they can actually take and put together pans and have movement in it, so they can use it for websites or for a TV commercial or something, rather than just being stills. As a photographer now, it's a great opportunity to move into commercial directing ...

When shooting an album cover, what's the process? Are you approached by the band or by the label? It's a mixture. I market myself to the management and to the bands and to every pop star I know once I get their emails. I've been doing it for a long time, I do have a pretty good reputation in the business, but a lot of times it's word of mouth. How a project usually happens, most times it comes from the record company. And they're basically the middle man between me and the artist, if I don't know the artist. 3OH!3 is a good example. The band had an idea that they wanted to have gold bodies and hands coming out of gold water. I took that and figured out they wanted to have the album cover be their 3OH!3 hands, which is two hands put together with the "O" in the middle. We figured out in Photoshop how to do all that stuff, because they didn't have a very large budget to do it really, [and] it would have been really hard to do it real on set. And I had to put it all together.

I've always said, I take every pop star - and I'm not trying to put them in my photographs, I'm basically trying to make a new image for them. I'm not a cookie-cutter photographer. A lot of photographers, you can instantly look at their picture and go, "Oh, that's an Anton Corbijn," or "That's a Danny Clinch." I couldn't do that, I think I would go crazy doing the same picture over and over again. There are definitely styles and stuff I like to do, I do like repetition. But when it comes shooting Marilyn Manson the same way I would shoot Ozzy Osbourne, I wouldn't do that. Not only are they both the same kind of pop star, but it would be too similar. They would be ripping each other off.