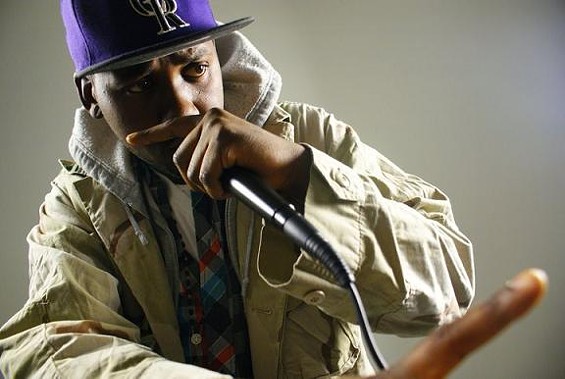 Tef Poe's War Machine is a nineteen-track tour de force. The Force member's musical versatility has always been his calling card, and so it's not surprise that Machine embraces diversity and defies pigeonholing. Genre-wise, it touches on warm R&B, ominous hip-hop, celebratory club bangers and futuristic synth-rap. Emotionally, it's a roller-coaster -- songs are menacing, lighthearted, vulnerable, tough, serious and even fun.

Annie Zaleski: You're known as an artist who dabbles in varied styles and genres, but War Machine brings this to new levels, I think. (Ha.) What was your aim with the album? Tef Poe: I come from the battle-rap circuit so the metaphors, punchlines and the battle-rap-driven records are my forte, but I like girls and I got sick of performing for crowds of mostly male only audiences. When I made my second solo album, The Redeemer, I determined I wasn't going to have that problem again, so I started making records in that vein and being more honest with myself about my influences. I love the backpack, true-school hip-hop scene, but I tend to have a more enjoyable time at the clubs you typically wouldn't expect to see people like Tef Poe to appear.

I have a pet peeve with people that are artists but refuse to make music that reflects their own musical taste. A good example would be a person that says, "Yeah my favorite rappers are T.I. and Rick Ross, that's all I listen to," but when you play their music, you would assume they only listened to Mos Def or Wu Tang. We live in a generation were the art form of dance has returned, so we as musicians must make music for the dancers to enjoy. I've learned to dabble in both worlds and stay true to myself at the same time with this album. It was truly a gamble, but the overwhelming amounts of positive response War Machine received has influenced me to take even greater creative risks.

What's the meaning/story behind the album's title, War Machine? What does it mean to you? Well, the exact meaning behind this title has changed so much over the process of creating this body of music that it's often difficult for me to answer this question. It seems to be the most-asked question about the album whenever I do an interview. There are probably three different versions of this album floating around in Tech [Supreme]'s computer. I originally wanted to make a album that would counterattack a few of the naysayers that we attracted due to last year's success.

I felt like I was getting attacked from so many different angles due to the runaway success of my single "Showstealers." I was dealing with a lot of personal issues concerning my self-esteem as an artist after we released Money Never Sleeps. I had finally reached a few goals I previously thought were impossible to reach. I had no idea how easily greater achievements can bring more problems and the stress levels it can create. I felt like a victim, and War Machine was my way of fighting back. The album itself is basically about taking all challenges and flipping them to your own advantage. I wanted War Machine to be more aggressive than my previous albums but I didn't want the dominating theme to be fueled by my anger and insecurities.

The producers you worked with on the album are impressive - especially Basement Beats, Urban Legendz, InHouse Prod. What did you like about the style/music that each of these teams brought to the album? First off shout out to Black Spade and Nodzilla a.k.a. DJ Needles -- I broke one of my pet peeve rules and put this project out without production from either one of them being featured on it. Tech Supreme comes to the table as not only a producer but also co-writer on a few records. He plays Quincy Jones to my attempt to be Will Smith or Michael Jackson. [Laughs] It was his idea to dumb down the hook on last year's smash record "Showstealers." He also wrote and arranged the chorus and vocals for "Crazy" alongside with producing the actual instrumental. He's my go-to guy for bouncing ideas and brainstorming new things I desire to do.

I've been cordial with Koko from Basement Beats for a very long time. I have a huge amount of respect for the body of work he has produced and the names attached to his resume are legendary. He's worked with people I consider to be some of most genius pop/hip hop artists of our time. I remember sitting at home watching the video with "Shake Ya Tail Feather" -- seeing Nelly, P.Diddy and Murphy Lee on screen together made me feel proud of my city. I found out the guy that produced the record was from here also, and I thought was even more amazing. I'm unsigned and he's a Grammy-nominated producer.