J. Roddy Walston on the Business, the South and the Force of Family 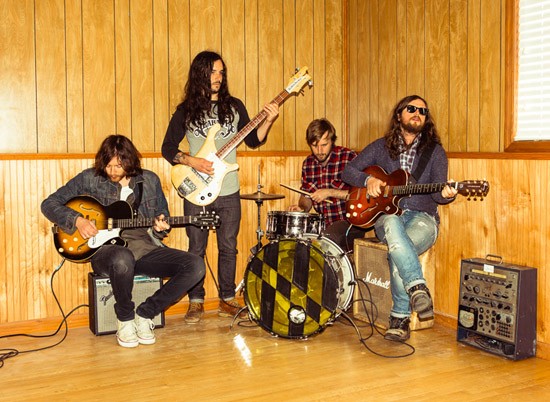 Courtesy of ATO Records
Onstage -- his hair whipping like a battlefield banner, his piano splintering, his gnarled voice bellowing and his band crushing out something like rock, something like the blues -- J. Roddy Walston is surely a force, but not really a force of nature, as he is often deemed. His reckless music and wild delivery is the artful sum of the sounds he's always heard in his head: driving honky-tonk, Sun Records rockabilly, Stax singles and heavy classic rock. And he had to work at those sounds to translate them into music that struts off the stage and burns off a record.

Born and raised 30 miles east of Chattanooga in Cleveland, Tennessee (population 41,000), Walston is a son of the South and a son of a musical family, a songwriter's songwriter even if his lyrics are often no more discernible than the slurry phrasings of "Tumblin' Dice" and no less primal than major influences like Little Richard or Jerry Lee Lewis or, undeniably, Led Zeppelin. The stories in his songs are nothing if not meant to be felt in the music.

J. Roddy Walston and the Business return to St. Louis for an appearance at Plush on Tuesday, October 7. RFT Music caught up with Walston as he and his band made their way toward Texas for a performance at the ACL Music Festival.

Roy Kasten: Tell me a little bit about growing up in Cleveland, Tennessee.

J. Roddy Walston: It's a pretty small town, not necessarily a lot to do. You have to come up with whatever you're going to do on your own. You're making it up for yourself. It's a town of people doing decent jobs trying to raise decent families. It's not some old-school, blown-out industrial town. I still love it. I visit my family and friends there, but I don't know if I could live there again. I think for awhile it held the record for most churches per capita.

That explains a lot.

Yeah. A lot of churches, a classic-rock station, a '50s Stax Records station. A classic-country station on the radio.

Is your family musical?

Yeah. I learned a lot about playing piano and guitar from my grandmother. She was a gospel/honky-tonk player. If you live in that town, it's genetically required that you can sing; you have to be in choir. My older brother is a better musician than I am; he can pick up just about anything and start playing. He likes music but doesn't care about it the way that I do. Maybe because it came so easy for him. So, yeah, my grandmother was pretty influential on me, at least early on.

I didn't realize that the Business has been together since 2002.

Not the exact lineup. No one in the band now, except me, was in the band in 2002. Early on it was sort of an experiment. The idea was that I would write songs and play them with a band or without. Sometimes I would grab audience members and have them play, so they were part of the Business for those few minutes. I had friends who were playing, there would be twelve people or six people playing. I moved to Baltimore, and that's how I met Steve [Colmus] our drummer and Billy [Gordon] our guitar player, and that's when we started touring, and it turned into more of an actual band. That was 2004. We started to have shared successes and shared failures as a real band.

How hard was it to make the transition from being a band playing live and then getting it together to make records in the studio?

It's a different mentality. You have to shift gears from being an interpreter and a performer to being more of a creator. But I've always, since I was thirteen or fourteen, recorded stuff on my own, on four-track tape recorders, and then a buddy bought a computer we could record on. And then Billy our guitar player as well. We've been into recording for a long time. Writing songs for us involves a lot of recording, working out the vibe of songs, background vocals and that sort of stuff. It's less what people expect: four guys sitting in the room saying, let's try this or this. It's not really like that. The most modern thing about our band is that we'll send ideas back and forth on iPhones. I hate that awkward sitting in a room, play a song, everybody just try to do something. When we get to work on new stuff, I'd rather everybody have a starting point.

And we're on the road a lot. The harder transition is going from being on the road to being a normal person at home. It's tough to leave home, but we all understand that it's pretty simple to be in a band in a van. You wake up, have a terrible breakfast, you drink some coffee, get in a car and drive eight hours to some place. And then it's two hours of an amazing experience with 200 or 15,000 people or whatever it is. That's not confusing or complicated to navigate. The harder thing is, for the last five weeks, every room I've walked into has been a room full of people there to see me or who want to talk to me -- in the sense of walking into a club, you know. It's a weird, strange mind trip of every night there's a party for you. Then it's like, "I may not come home!" But then you have real friends and real families with lives. It's an effort to make sure that you don't think touring life is normal. Honestly, it takes a good chunk of time for me to be off the road to write. I love playing and performing in front of people who are fans and some who are not fans, but it's not real or normal. It takes a while to get back to having family and normal people around me. It's hard to explain. I'm struggling with the words right now.