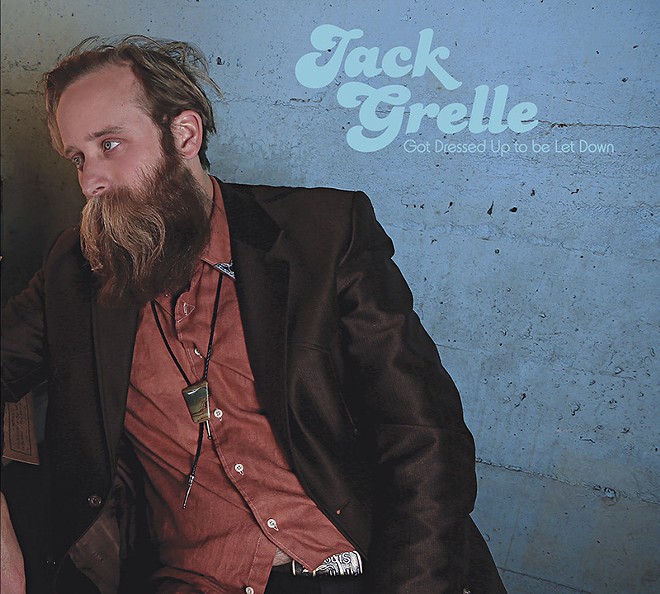 Much of the appeal of honky-tonk music, especially in 2016, is its sense of timelessness. Its loping rhythms and pedal steel-infused lines tell stories that invite drinking, dancing and carousing much as it has over the genre's 70-plus year history. But when local singer-songwriter Jack Grelle, who proudly channels his honky-tonk elders, takes some liberties with the style, he expects a little blow-back — even if it comes in the form of boos, walk-outs and raised middle-fingers.

A few weeks ago Grelle and his band were playing a seated show in Nashville during the Americanafest when he introduced a song called "Changes Never Made" that takes its inspiration from the death of Michael Brown and the resulting unrest in Ferguson, Missouri.

"I have to preface the song — I can't just play it as if it's some other song," says Grelle, "so the thing I've been saying is, 'In 2016, you wouldn't think you'd have to say that black lives matter, but we do.' The fact that that gets some people's blood boiling is mind-blowing to me."

That introduction was enough to inspire a show-goer to visibly display his displeasure with Grelle and the song. "This dude was front and center and seemingly into it the whole time," recalls Grelle. "When I introduced that song, he stood up in front of the whole crowd flying his middle finger and marched out with it up."

For his latest full-length, Got Dressed Up to Be Let Down, Grelle and his band used much of the ad-hoc twang and ragged country tropes that fueled 2014's Steering Me Away, but a sense of activism shines through in places. For Grelle, who first cut his teeth in socially aware punk bands as an undergrad in Columbia, Missouri, the marriage of country and politics isn't so foreign.

"I think in all my songs I try to be genuine to a degree, and have some form of truth, whichever way I might spin it," Grelle says. "As a songwriter, you gotta take some truth and I think you gotta put some dynamite on it and blow it up a little bit to make it more interesting. With this one, I think a little more of my ideals came through, as far as politically and socially, and being a little more conscious as a songwriter."

When it came time to write "Changes Never Made," Grelle says he channeled Woody Guthrie to help him toe the line between righteousness and documentation.

"When [Brown's death] happened, it affected everybody," says Grelle. "And I wanted to write a song about it but I didn't want to preach, especially as a white man. I didn't want to get up there and claim to have the answers and talk down to people. It's not necessarily my story to be telling."

To find his own stories to tell, Grelle plumbed family history for the album's most tender moment, "Birthday Cards." As the title suggests, he sings of mementos sent by his grandmother. Her cards would include a little scribbled drawing of Grelle's grandparents — and after his grandfather's passing, his grandmother added angel's wings to the portrait. That hook provided Grelle an entry to write a tribute to his grandmother, whom he describes as "the matriarch" of the family and who, in a roundabout way, tightened Grelle's connection to country-and-Western music. As the song goes, they bonded over her old 78s, played on an ancient, towering Victrola.

"She showed me 'Wabash Cannonball' and Bob Wills before anybody else did and totally schooled me," remembers Grelle. "It was such a special thing."

While Grelle will be undertaking a 25-date tour to promote his new album, this week he joins forces with another act that marries country music and social activism. In the past year Grelle struck up a friendship and musical partnership with Patrick Haggerty, who founded Lavender Country, which claims to be the first openly gay country band, in the early 1970s. The band only put out one LP, but Haggerty's story has inspired a legion of fans and admirers who see no conflict between queer identity and normally ramrod-straight country-and-Western music.

"Playing a show with such beauty, celebration, love and politics and fight, and seeing how the crowd reacts to it and how emotional it is for so many people — it's really just inspired me to say more."