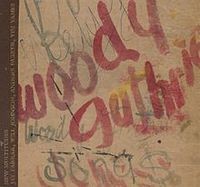 Woody Guthrie left behind notebooks full of words, snippets and entire lyrics. The Woody Guthrie Foundation, led by his daughter Nora, has been lending them to artists to create music around his words. You may remember the series' most successful installment to date, Wilco and Billy Bragg's collaborative Mermaid Avenue, released in 1998. You may also remember that a couple years ago, it was announced that Jay Farrar would be taking up the mantle. This was met with sniggers, as is most anything that brings former bandmates Jeff Tweedy and Farrar within one degree of separation of each other. But that ignores the magnitude of the Guthrie project, which has included albums from the Klezmatics, Jonatha Brooke, Akron/Family and others.

After a long silence, Farrar's tribute album now has shape and form and a release date and attendant tour. He joined with Will Johnson (Centro-matic), Anders Parker (Varnaline) and Yim Yames (My Morning Jacket) to create New Multitudes, which features all unrecorded Woody Guthrie lyrics and will be out on February 28th via Rounder Records.

The tour, unfortunately, comes nowhere close to St. Louis. In fact, it doesn't ever leave the coastlines. Here are the dates: