The 2013 Riverfront Times Music Showcase is this weekend! Think of it as St. Louis music's own official holiday and consider this the season. Throughout May we at RFT Music have been working hard to make our cases for all 130 bands and artists nominated for an RFT Music Award this year in 26 categories. Read on and get yourself acquainted, and we'll see you at the showcase! Check out this post for the full schedule. Then, create your own showcase schedule with this handy custom scheduler, courtesy of the fine folks at Do314.com!

If there's a purer musician in St. Louis than Dave Stone, he or she has yet to play as many gigs, yet to quietly shape the direction of St. Louis jazz and yet to touch as many hearts and souls as the veteran tenor saxophonist. Coltrane, Rollins, Hawkins and Dolphy are among his heroes, and though he has always had the chops to play their music straight, Stone finds a way to leave a personal mark on the great bop and post-bop songbook. His residency at Mangia Italiano is surely the longest-running residency of any jazz musician in town, and a more than a sure bet on a Friday night. We're lucky to have him still swinging among us.

If there must be a First Lady of Jazz in St. Louis, one should look no further than Denise Thimes. With more than two decades of performing behind her, Thimes has won the respect of everyone who is anyone in jazz, both regionally and nationally. It takes a special singer not to be overpowered by the likes of Clark Terry, James Moody or Earl May, and Thimes is simply that: special. Her voice can be delicate, almost gauzy in its tone, but even when she's embracing a ballad there's always a sense of pure and playful jazz swing to her phrasing. And though she is technically flawless, Thimes is not about the technique. She's about the honest emotion that only a voice like hers can express. 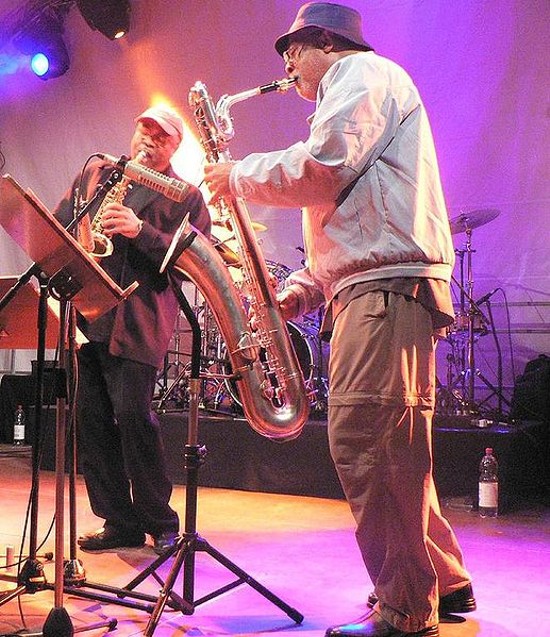 Authority, even of the musical type, should be viewed with skepticism. But with the great baritone saxophonist Hamiet Bluiett, authority is a matter of presence as much as it is accomplishment. One of the central forces behind the World Saxophone Quartet and a major contributor to the Black Artists' Group, Bluiett has been known to play the clarinet, flute and even monster bass saxophone. But it's with the bari sax that his talent for improvisation — with nuances, textures and tones that such a bold instrument rarely displays — has truly left an abiding mark, not just in St. Louis, but on the world of jazz writ large.

There are many faces of Lamar Harris. He is a soul-funk producer, a cross-cultural collaborator, a conspirator in the FarFetched collective, a member of Tribal Funk and a turntablist under the moniker DJ Nune. One could assume that the Lamar Harris nominated for Best Jazz Artist is the trombonist who has performed alongside jazz legends Christian McBride and George Benson, the one with the sensuous tone and smooth phrasing not generally associated with his main instrument. Calling Harris simply a jazz artist is limiting, which says more about the state of the genre than it does about his diversity of musicianship. Jazz fans often freak about their sacred music losing relevance. Lamar Harris fights this battle on the ground level every time he makes a sound.

Pianist Peter Martin had some enormous shoes to fill when he took Reggie Thomas' spot on the Southern Illinois University-Edwardsville jazz faculty. Martin tends to thrive in high-pressure situations, be it performing to thousands internationally in Diana Krall's band or playing for the President at the White House. Combining the bookishness of Brad Mehldau with the feel and abandon of McCoy Tyner, his melodic sense is intellectually stimulating without sounding academic — a talent not every collegiate professor in the St. Louis jazz scene possesses. Musicians with such skills and reputation are rare, and having one in such close proximity is a gift that should not go unappreciated.