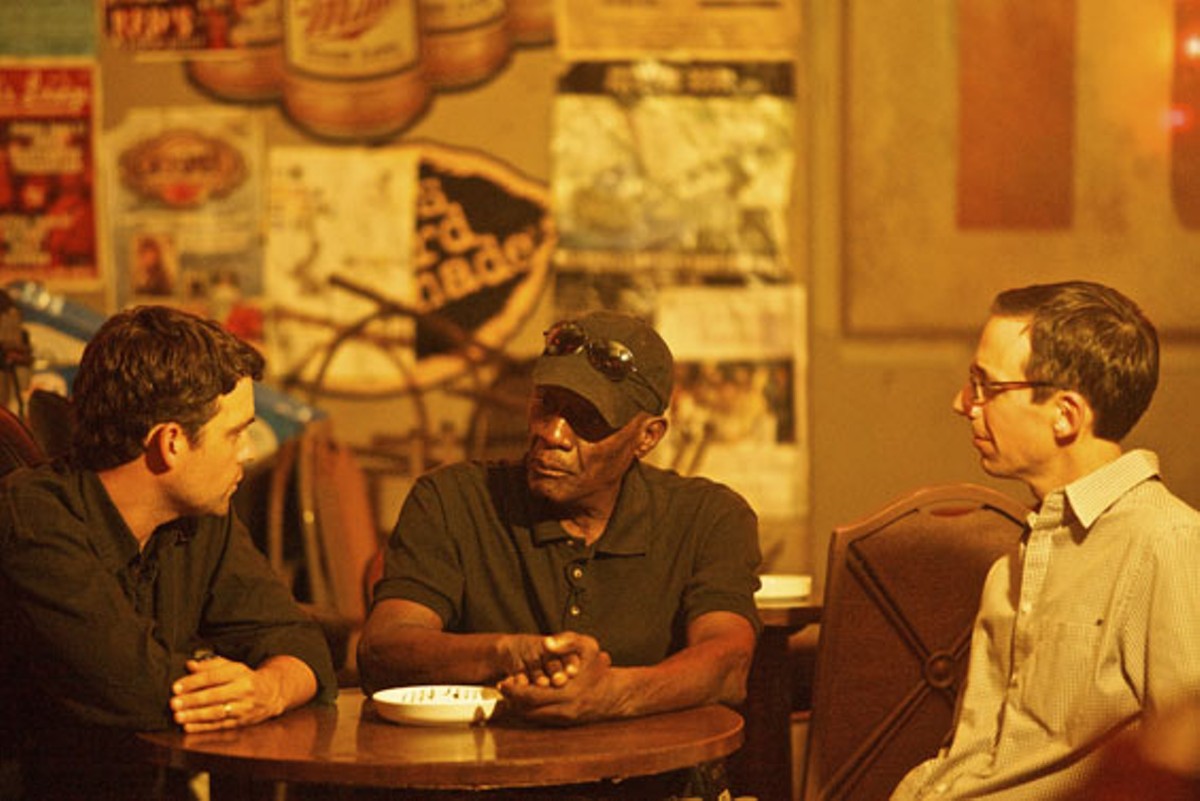 Jeff Konkel, Jimmy “Duck” Holmes and Roger Stolle are key players in We Juke Up in Here! Lou Bopp

As founder of the independent St. Louis-based blues label Broke & Hungry Records, Jeff Konkel has been a determined chronicler of Mississippi music and culture. Like many St. Louisans, Konkel, 38, grew up hearing lots of blues-influenced rockers such as Led Zeppelin and Eric Clapton on local FM radio. By his late teens that resulted in "just sort of backing my way into some country blues musicians," he says.

He continued to cultivate his interest in the blues while attending Saint Louis University and later when working as a reporter for the Suburban Journals and in public relations for SLU, Fleishman-Hillard and the Special School District. By the late 1990s, Konkel was taking regular road trips to Mississippi to hear live performances and visit historic sites and musicians' graves. Frustrated that no one seemed to be documenting the great music he was experiencing, Konkel decided to do something about it himself by starting Broke & Hungry, telling the RFT in a 2006 interview, "More than anything, as someone who's been a rabid music fan for many years, but has very little musical ability himself, it's a way to feel like I'm part of the process."

Since then, the label has put out a dozen CDs of modern-day rural blues, spotlighting veteran performers such as Jimmy "Duck" Holmes as well as previously unknown musicians including Pat Thomas and the pseudonymous Mississippi Marvel. In the process, Broke & Hungry has earned accolades from music critics and praise from blues fans around the world for both the quality and the authenticity of its output.

Then in 2008, Konkel took his enthusiasm to another level, teaming up with Roger Stolle, a former St. Louisan and fellow blues aficionado who owns Cat Head Delta Blues & Folk Art in Clarksdale, Mississippi, to produce the documentary M For Mississippi. Stolle, who had been the marketing director here in Missouri for May Company, moved to Clarksdale in 2002 to founded Cat Head as a combination of promotion agency, retail store and record label with a roster that includes St. Louis' Big George Brock (himself a native Mississippian).

Shot in slightly more than a week and taking its title from one of Brock's songs, M for Mississippi was an account of a road trip by Konkel, Stolle, filmmaker Damien Blaylock and soundman Bill Abel, showing them traveling around the state, hanging out with and interviewing a dozen of their favorite musicians. M for Mississippi earned good reviews and was honored with several awards, including "DVD Of the Year" at the 2009 Blues Music Awards.

Now Konkel and the M for Mississippi team are nearing the finish line on a brand-new film and music project, set for a world premiere in April at the annual Juke Joint Festival in Clarksdale. Their latest effort, We Juke Up in Here!, takes place in the same geographic territory as the previous film, but focuses on a different aspect of the story, says Konkel.

Simply put, while M for Mississippi was about people, We Juke... is about place. "It's as much a celebration of one particular venue — Red's Lounge in Clarksdale — as it is a look at the scene in general," says Konkel. "We kept coming back to Red's, both physically throughout the production and conceptually as an archetype."

The idea for the film came when Konkel and Stolle realized that as older blues musicians retire or die, the venues they played are becoming endangered as well. "Traditional musicians are passing at a fairly alarming rate," Konkel continues. "And when someone like Hubert Sumlin or David 'Honeyboy' Edwards passes, everyone sits up and takes notice. But these venues are disappearing, too, and the audiences are changing."

Simply put, older fans of the traditional juke-joint sound are being replaced by younger patrons who prefer a slicker, more contemporary soul-blues sound. As a result, Konkel says, some juke joint owners have dropped live music entirely in favor of DJs or jukeboxes, while others book live performances only when there's a blues festival happening somewhere nearby.

"We wanted to document the history of that scene, what juke joints have meant to Mississippi, and what's happening in the wake of their disappearance," says Konkel. "You can't expect time to stand still, but when a great tradition transitions or disappears, it's certainly something worth taking notice of."

They began filming We Juke Up in Here! in June 2011, shooting on selected weekends over the course of six months and wrapping up principal photography in December. "Most of that production took place at Red's, but we did also visit other juke joints in the region," says Konkel. Those stops included the infamous Dew Drop Inn, which "has now reverted back to being basically just a bar; it's not really a live music venue anymore," and Jimmy 'Duck' Holmes' own personal juke, the Blue Front Café, where "his local audience doesn't care much for old-time country blues. He usually won't even break out his guitar unless a tourist comes in."

With a similar budget to the first film but fewer performers to pay, Konkel says they were able to bring a bit more in the way of production values to We Juke Up in Here! Most notably, Blaylock (who this time also is getting credit with Stolle and Konkel as co-producer and co-director) was joined by a second cameraman, Lou Bopp, which enabled the crew to work more spontaneously and capture more action as it was happening.

"Since it is largely taking place in one venue, and it's a small venue at that, we wanted to make sure that you didn't feel like you were in a cramped space for 70 minutes," says Konkel. "It did require a little more creativity — we wanted to get interesting shots and shots from multiple angles." Bopp, described by Konkel as "really a fantastic commercial photographer," also took still photos to document the production process and for use in a booklet that will be included with the DVD/CD release.

Another new wrinkle was the addition of some overhead shots, taken from 100 feet in the air using the basket of a cherry-picker truck rented from a local utility. Other solutions were lower-tech — with no budget for a dolly, some moving camera shots were executed by simply pushing around a cameraperson in a wheelchair, which was dubbed the "Delta Dolly."

"We're deep in the editing process right now," Konkel says. They hope to be finished by the end of this month. Blaylock is cutting the film together and sharing segments with Konkel and Stolle online. "It's an interesting way of editing a film, since we're all in different cities." Still to come are the addition of closed-captioning, foreign-language subtitles, and the various other elements of the DVD, and preparation of the CD soundtrack and 24-page color booklet. "It's going take a lot of sleepless nights to get it done," says Konkel. "It'll be a hairy couple of months, but we're up to the task, I think."

In addition to the world premiere in Clarksdale and concurrent release of the DVD/CD package, Konkel says he and Stolle already are setting up screenings at film festivals and blues events in several European countries, including Italy, where major sponsor Rootsway Roots & Blues Association is located; the UK; and Norway. "For Roger and me, that's a fun reward, since we like to travel," he says. "For the musicians, they'd just as soon play a gig in Akron as go overseas, but [overseas is] where the real paydays are." As with M for Mississippi, Konkel hopes We Juke Up in Here! ultimately will encourage viewers to visit some of the film's locations in person. "If they don't do it now, there's no guarantee that it's going to be there tomorrow."