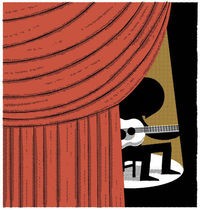 Over the past few years, Mangum has occasionally embarked on short acoustic tours, playing songs from the NMH catalog to rapturous fans. This tour, his longest since breaking up NMH, is billed as his last in this format. No word on what this means for the future. Mangum has kept in touch and performed with his NMH bandmates, however, so anything is possible.

Although this is Mangum's first solo performance in St. Louis, he frequently played in town during NMH's heyday. Earlier this year, we researched a small oral history of these performances, which included a show at the old Cicero's, a couple of dates with Superchunk, and an enigmatic, hushed show at the Side Door. The Side Door set has become one of the most traded of all NMH bootlegs, but we couldn't find a single person who'd either attended or remembered it. Months after the fact, we heard from Vanessa Hays, a Wash U. graduate and indiepop enthusiast who'd attended with some friends and had fond memories of Julian Koster's singing saw.

Tickets are $26 through $30.50 and will be on sale on November 15 at 12:00 through MetroTix. There is a limit of four tickets per person - which is probably prudent on the Sheldon's part, as this is sure to sell out.