Via Christian Schaeffer, expert Craigslist searcher: Someone is selling Jeff Tweedy's first bass cabinet, which he used in the Primitives/Uncle Tupelo days, via this Craigslist ad:

I hate to do this, but after holding onto this thing for almost 20 years, I may have to get rid of Jeff Tweedy's first bass cabinet, played in the early Primitives Days and the earliest Uncle Tupelo gigs in the 80's. Jeff took this up to B&G music as trade for some better gear in the late 80's, at which time my friend Joe snagged it for use in his cover band that I later joined.

Through some cajoling I got the cab off of him, since he didn't really think it was worth anything at the time. It was painted by a teenage Tweedy at the beginning of the Tupelo days, reading "Pickle" on one side, and "River" on the other. The band had a song called "pickle river" at that time, a long meandering grungy instrumental that sounded a lot like much of the Sub Pop crap they listened to *LOL*. 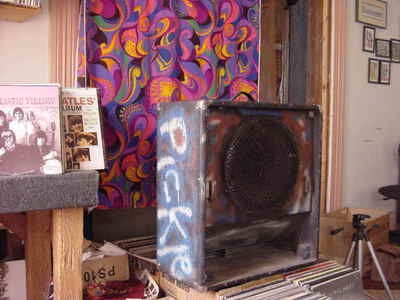 See the pic right there; after the jump, a video from a mad early Uncle Tupelo gig which proves this thing's legit.