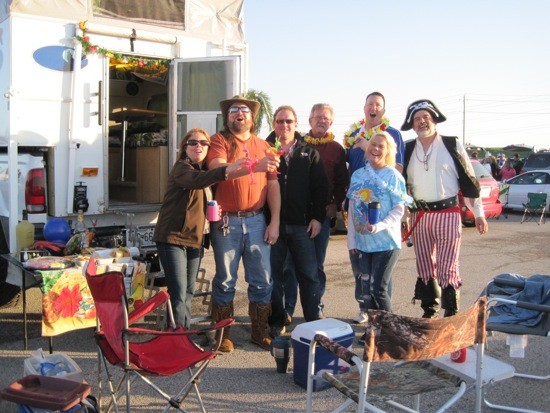 Even if you've never been, a Jimmy Buffett show is pretty much exactly what you think it will be: Otherwise normal people swishing around in raffia skirts -- friendly, if a little unsteady on their feet, but doing a decent job of not spilling the beer they scored off of fellow tailgaters who were only too happy to share. These are the Parrotheads, the people about whom Buffett famously said during a 60 Minutes interview: "It's been wonderful for me, and I feel so privileged to have fans that are that loyal. But on some days, I want to go to them and, 'Get a life,' you know? It's just made up, you know?"

They know that the pre-show cruise-ship groaner "Hot, Hot, Hot" doesn't serve any purpose, except maybe to signal to those in the beer line that the show will start soon, and they'd be wise to buy two.

They know they'll cheer for the vast majority of the show, even though the setlists are utterly predictable: For a long time, Buffett had eight songs -- all of which can be found on his 1985 greatest-hits collection Songs You Know by Heart -- that he played at pretty much every concert, and he still hews pretty closely to this formula. Buffett performs about 27 songs per show, so even if the casual concertgoer only knows the greatest-hits album, he'll still recognize about a third of the songs. Further number crunching shows that the odds of said concertgoer sitting next to someone slurring the lyrics is higher than [enter Coral Reefer joke here].

And yet they come, with shark fins on their vans and portable tiki bars. Some are here just for the spectacle, and others pine for the oldies, the stuff that was more revelatory of Buffett's country roots and amusing way with a lyric, an artfulness that's apparent on "Woman Goin' Crazy on Caroline Street" (1976's Havana Daydreamin') and far less so on "Math Suks" (1999's Beach House on the Moon).

A peek at recent setlists reveals such tantalizing songs, culled from a career that's spanned four decades -- longevity that surprises even Buffett himself. (He calls touring his "summer job.) Sprinkled between the "Big Eight," past concerts have spotlighted songs like "The Wino and I Know," awesome because there needs to be more songs about winos knowing things. "Wino" opened Tuesday's show, after which Buffett noted that a sign in the seats read "We Will Catch You!" a reference to the publicized spill the singer took off the stage in Sydney, Australia.

After that, though, the in-between song banter was pretty much impossible to decipher. We've sat this far back in the lawn before, and can't recall it ever sounding more jumbled.

While there's an online Orthodox Church of Buffett, the man himself aligns his concerts more closely with utilitarianism's "greatest good for the greatest number." Last night was no exception: By song No. 2 ("Brown-Eyed Girl), Buffett had already name-dropped St. Louis, and most songs that followed were right out of the standards playbook: "Pencil-Thin Moustache," "Fins," "Come Monday" and "Margaritaville" among them. "Nautical Wheelers" was a welcome surprise. The Coral Reefers include a few hometown members, and the crowd eagerly welcomed them back.

Hits were delivered with reliable cheerfulness, but Buffett sounded a little dated and more deflated than the beach balls bouncing around the lawn. Not to say that anyone noticed: Crowds here know what they're getting, and a few flat notes aren't going to stop them from coming next year, or the year after that. It's an experience in itself, and that's enough for them.