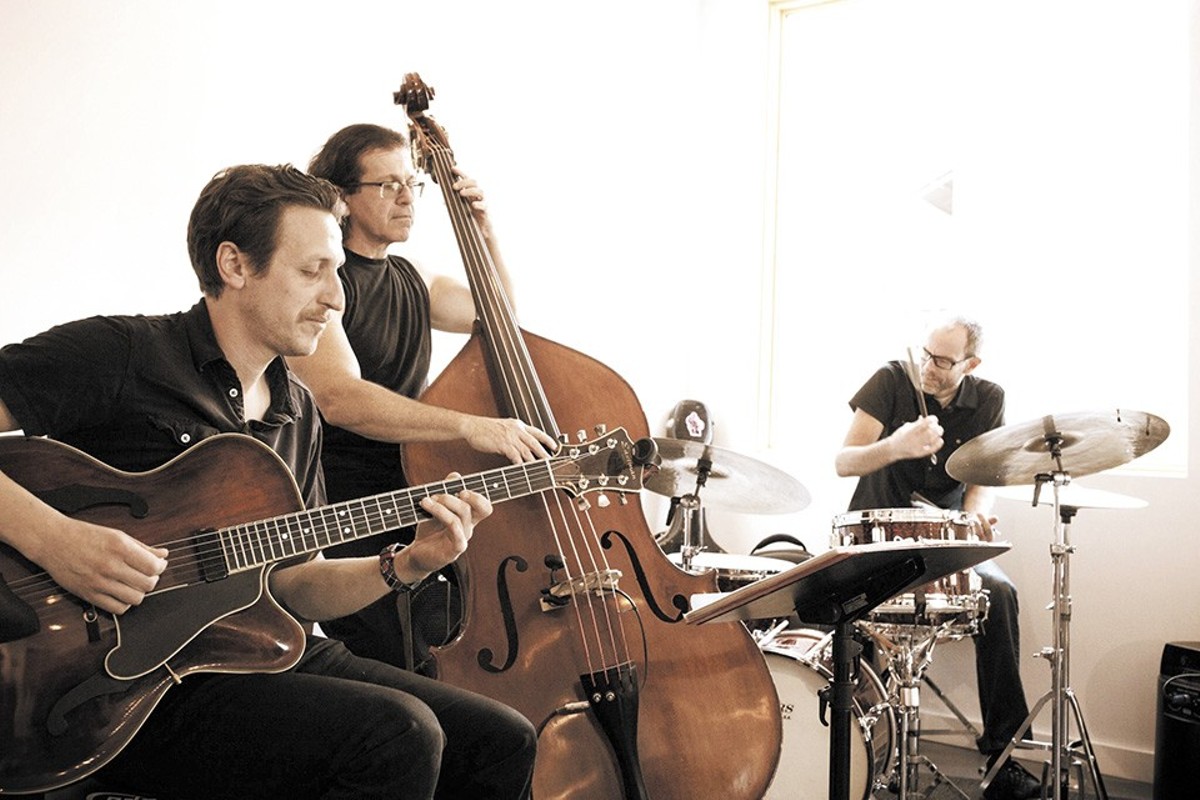 Out of Nowhere is the first release by a highly regarded player in St. Louis' jazz scene. VIA THE BAND

It turns out that Peoria, Illinois, is a five-jazz-band kind of town. No more, no less, according to one expert on the topic. That's Joe Park. He's spent a good amount of time in one of the five, playing guitar for his teacher's band, John Miller and the Romaniacs, still occasionally gigging with them six years into a life in St. Louis.

Regarded as a true player's player since moving here a half-decade ago, Park shares his talents with a few groups. There's Sarah Jane & the Blue Notes, which mixes club work alongside private event gigging. He's frequently found in duo and trio settings with Tommy Halloran. And there's his own, self-named trio, which is releasing an album at the Focal Point on Saturday, December 1.

If ever there was a natural blend of venue, artist and need, this is that show.

"I like Focal Point," the soft-spoken Park says. "It's an intimate concert setting, and it seems like every show is kinda special. There's something magical about the place, and it seemed a cool spot to do it. They asked me to do a gig that night and asked what the theme would be. 'Well, I have a CD to put out, how about that?'"

The album is Park's first as a bandleader, and he's joined on the disc by the same players that accompany him for his weekly Wednesday night residency at Yaqui's: Guy Cantonwine on bass, Drew Weiss on drums, Park on guitar. The band plays a modified form of the gypsy jazz that serves as Park's primary inspiration, but instead of the classic gypsy jazz formation of guitar, bass and one instrument from accordion, violin or clarinet, Park's trio features drums.

"I wanted to present the style with more of an American rhythm section, with bass and drums," he says. "I'm playing American jazz guitar, because I'm an American. It's something fun and neat and interesting to do. So we go into a lot of the gypsy jazz standards, but they're presented in this other way."

The twelve tracks on Out of Nowhere were each recorded live, three times apiece over the course of a single day in February. Well-rehearsed thanks to its weekly gig at Yaqui's as well as other one-offs, the band didn't feel stressed pushing those 36 takes in one session, and spent minimal time selecting the best takes on the second of a two-day recording experience in Nashville. There, they worked at the Attic Recording Studio, where Greg Magers and Graham Burris handled production duties.

"My brother-in-law has a studio down there," Park says. "They'd just moved down there from Chicago and all kinds of big name acts have recorded in their studio. We went there and recorded it live and it went great. They were able to get the guitar sounds I wanted pretty easily. We listened to Barney Kessel and Johnny Smith and Kenny Burrell. We wanted to get that Blue Note sound, and we played some Blue Note records and he heard and mixed it exactly like that. We were going for a 1950s jazz album, overall. Cocktail-party music. I was born to play cocktail parties, man. That's my lot in life."

His life as a player began at the time a lot of kids find the muse, in fifth grade.

"I was probably about ten years old," Park says. "I'd always liked it, and my uncle was a guitar player and he'd hold it sideways for me to play. I wanted to be a guitar player from when I was a little kid. I started by playing rock music, then played classical guitar when I was in high school. And I played old-timey American music when I was in my early twenties, stuff like bluegrass. I started playing jazz in my late twenties and I was really interested in Django Reinhardt, and that's what I've been after for fifteen years now. I'm pretty happy. I still have a long way to go perfecting the art of being a good jazz guitar player. That's a lifetime battle. I've got my work cut out for me."

A lot of contemporaries and fans would suggest he's further along than he may suggest, but Park is as humble as he is soft-spoken. Content to wait for the right opportunity to share his work, Park has patiently watched the months tick by, from recording in February and through these final weeks of waiting.

"I've played in a lot of bands," he says, "and I've recorded a lot of albums. But this is my first as a bandleader. I'm excited to get it out, get my sound out, based on my ideas."