KDHX: Not Playing the Hits for 25 Years 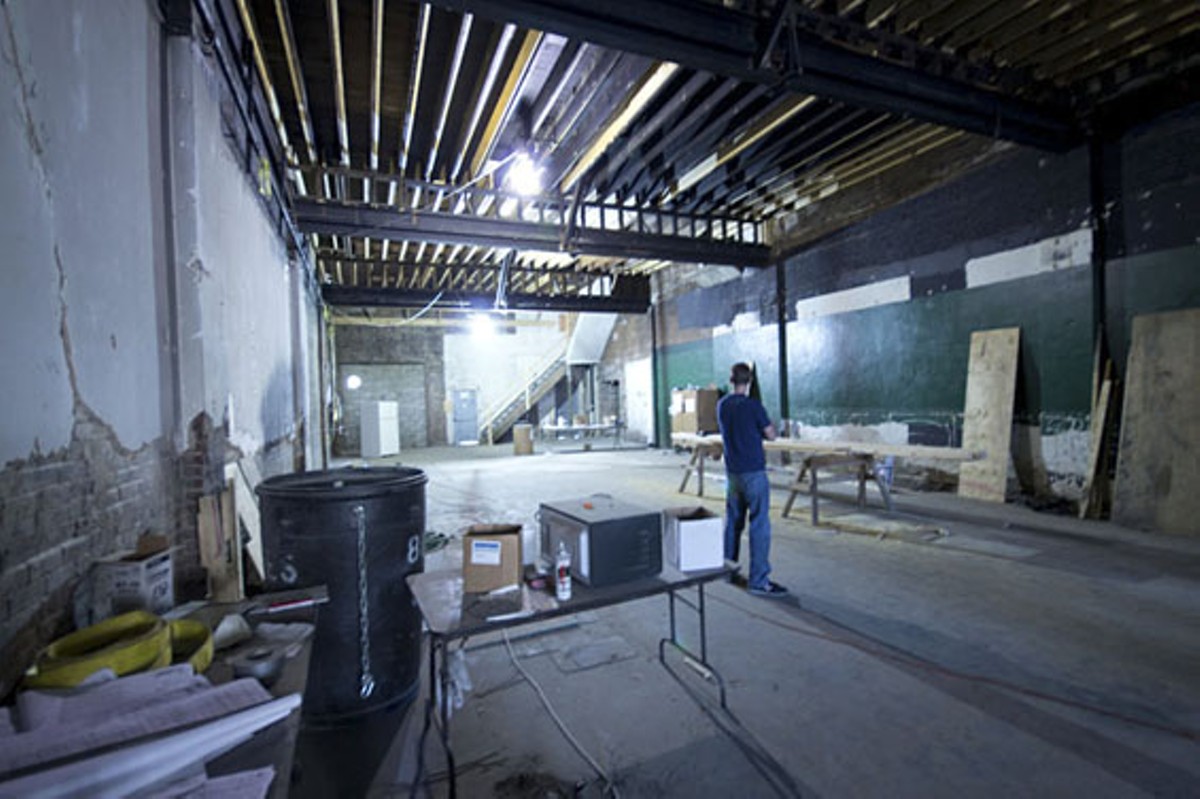 Take a tour of the future home of KDHX. Tom Carlson

KDHX: Not Playing the Hits for 25 Years

The heart of Grand Center is a triangle pointed at the Mississippi, anchored by the Fabulous Fox and Third Baptist, and scattered with bright marquees on restaurants and bars. Within one block are a half-dozen museums and venues, many of them marvels for everything from their acoustics to their large-scale site-specific sculptures. And at the triangle's apex, the point headed back toward the city's center, is the future Larry J. Weir Center for Independent Media.

Right now the building is a great clean husk. But soon, the Double Helix Corporation will move in and take a little community radio station into its second quarter-century. It has already raised $1.75 million of the $3.25 million it will need to fund the renovations and base operating costs for the new facility. So far, that money has been raised in the silent part of the capital campaign and has come from large donors and arts organizations. This week, the public portion of the campaign begins, in the middle of the station's separate fall membership drive.

KDHX (88.1 FM) will move into the Weir Center sometime in late spring or early summer 2013. And when it does, it will finally have a physical gathering place to match the ideological one it has had in the St. Louis music community for years.

The Double Helix Corporation is the 501(c)3 organization that owns and operates KDHX. It was formed after the demise of the KDNA (102.5 FM) community radio station, which operated out of Gaslight Square. KDHX started its slate of music and talk radio 25 years ago, in 1987. "Our volunteer model is something that has been around almost since the beginning of community radio," says executive director Beverly Hacker. "I think the thing that we've done differently is that we have really upped the bar on quality, helped them through training and through a little bit of internal competition and giving them better equipment. They have become really professional radio personalities."

Hacker took over in the mid-'90s, and Nico Leone joined as music director in 2003. "Nico brought so much to the station, but one of the biggest things he brought was that he knew the music and he had the relationships with the labels and the artists, and he helped to raise our profile within that part of the industry," says Hacker.

The station enjoyed another renaissance in 2007, when the Corporation for Public Broadcasting awarded KDHX a quarter-million- dollar grant designed to restructure and expand the station. "It was really transformative," says Hacker. In addition to rethinking fundraising strategy and management succession plans, the grant led to the promotion of Nico to co-executive director with Hacker. "People thought we were kind of crazy, but it ended up being the best possible thing we could do," she says. "Because of that we were able to do more with very, very limited resources."

Leone left earlier this year to take over as general manager for KCUR (89.3 FM), Kansas City's NPR affiliate, but the foundation he helped build at KDHX remains in place. His role was never meant to be a permanent one, and Hacker has resumed her responsibility as sole executive director. "We've spent the last five years building and grooming people to step into leadership roles," she says. "It was kind of like the next step in the development of the organization."

One of the reasons KDHX has flourished is its decision early on to differentiate itself by being hyper-local. The programming is all done by St. Louisans, who can play whatever they want. More significantly, perhaps, is the outreach efforts the station has perfected in the last five years or so. KDHX hosts concerts (like the tribute series at Off Broadway), large-scale events (like Midwest Mayhem at the City Museum) and has a physical presence at arts events across the city.

"A lot of the folks that started with us in the beginning were drawn to KDHX because they had no other choice. They couldn't hear the music anywhere else," says Hacker. "The people who come in now, because they can get anything anywhere anytime, they're coming in for the community. We've become a community of interest for people.

"We're not the best-kept secret any more. We're really getting out there, and people are understanding what we do and value what we do."

Is there a more apt metaphor for opportunity than a building under construction? Right now if you walk in the front door of the Weir Center — initially built in the 1920s and occupied by the Brilliant Sign Company — you'll be standing in what will be a coffee shop and bar, complete with a limited food menu. It will hold regular hours. It's not hard to imagine a crowd of KDHX volunteers, band members in to drop of music or perform at the studio upstairs, Saint Louis University students braving the wild lands north of Olive Street and music fans looking for a place to meet.

If you keep going back into the building, you'll get to a large open space — what used to be the second incarnation of the Creepy Crawl. You won't recognize it. The Creepy Crawl was dark and messy, with a drop ceiling that shed bits onto the floor. When crews went in to strip out the old infrastructure, they found twenty-foot ceilings, which will remain exposed. This will still be a venue, where KDHX plans to host live performances by traveling and local bands. With a stage near the back facing the coffee shop, it will hold somewhere in the vicinity of 300 people, or half that many when tables are set up.

"We don't really want to compete with other venues," Hacker says. She's adamant about this — the vision is that KDHX will host bands that no longer can or feel they should accept a cut of the admission cost but are too untested in St. Louis to earn a guaranteed performance fee from other clubs. The space will also be used for movie screenings and theater productions.

Upstairs, there will be three floors of studios, offices and editing stations in what was formerly an artist's loft and apartments. Overall, the station will go from 3,500 square feet of office space to 11,000. The new facilities will allow for more short-form on-air arts programming, increased video production capabilities for the Web and a broadcast studio for an HD radio feed.

That's the future of KDHX. But this weekend, the station will celebrate its past with a lineup of venerable local musicians performing at the anniversary party and a display of station memorabilia inside. And it's a safe bet that in attendance you'll find the most passionate, hard-working and knowledgeable St. Louis music fans and participants — a testament to what KDHX means to this city today.