Editor's Update, 8/9/12: Video of the raid on former Megaupload CEO Kim Dotcom's enormous New Zealand home in January has just emerged -- you can watch it above. The report, from 3 News in New Zealand, includes testimony from Dotcom -- who is accused of the largest copyright infringement in U.S. history, police footage from helicopters, interviews with security personell and more. It's a fairly impressive display of force given the circumstances. The police seem to have been expecting a bit more excitement than they got. Dotcom did not resist arrest, which was smart on his part given the small army of New Zealand police, special forces and even the FBI on hand. He is currently trying to prove in court that the search and seizure of his home was unreasonable under the New Zealand Bill of Rights.

SOPA and PIPA have been the talk of the internet for weeks, if not months now. Several major websites blacked out their content in opposition to the controversial bills this past Wednesday. On Thursday, a Federal raid took down the file-sharing giant Megaupload.com. In retaliation, the Guy-Fawkes-mask-wearing online "hactivist" collective known as "Anonymous" launched website-disabling attacks on the FBI, Department of Justice, Universal Music Group, RIAA and Motion Picture Association of America. Despite the overall weirdness of these facts in and of themselves, scratching past the surface a bit reveals even further oddities within this story. Without further ado, we bring you the top eight most eyebrow-raising elements of the Megaupload shutdown.

On Wednesday, January 18, many major internet sites including Google and Wikipedia implemented blackouts of their content in opposition to the controversial SOPA and PIPA bills that have been moving through Congress. Mere hours after the blackouts were over, the Fed's mega-raid on Megaupload took place. Officials of the U.S. Government have said it is a coincidence, but still to the outside observer it looks very neatly timed.

Born Kim Schmitz, the apparently eccentric German founder of Megaupload changed his name ten years ago to Kim "Dotcom". A visit to the web address "www.kim.com" yielded a content-less white page, which in this writer's opinion is a wasted opportunity for him to post up more totally sweet pictures of himself with his guns and cars. (Keep reading, see below.) 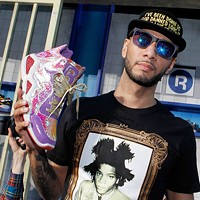 This article seems to mention it as almost an afterthought, but apparently hip-hop producer / master beat-crafter Swizz Beatz has his name on some of Megaupload's records as being CEO of the rogue file-sharing website. "The company itself is listed as being based out of Hong Kong and names musician Swizz Beatz, husband to Grammy winner Alicia Keys, as its CEO." While the alignment of a major music personality with a website notorious for copyright infringement is eyebrow-raising enough, more bizarre is the fact that more recent sources indicate that Mr. Beatz was not in fact CEO at all, but was working with them and did help secure top-name artists to appear in a very strange promotional video for the site.

In mid-December, Megaupload commissioned a song for an interesting marketing campaign - a peculiar 5 minute long video in which major recording artists P Diddy, Will.i.am, Alicia Keys, Kanye West, Snoop Dogg, Chris Brown, The Game, Mary J Blige and others all expressed their support for the site, seemingly in direct contradiction to it's reputation as a hub for copyright infringement.. Universal Music Group, with whom many of the afforementioned artists have contracts, demanded that Youtube remove the video on the grounds of copyright infringement - even though everything in the video was the intellectual property of Megaupload. Youtube complied, Dotcom filed a complaint, and the video was eventually restored. In an ironic move that assuredly angered the execs at UMG, Megaupload accused UMG of unscrupulous business tactics and referred to the record label as a "rogue" company, fueling the feud between the companies. Still, the most eyebrow-raising piece of information about this video if the fact that, according to what we see at the 1:48 mark, apparently Dotcom himself is the one (literally) singing the praises of his website in the song, despite the high-profile talent he rounded up.

According to this article, even before the "Dotcom" surname alteration, Kim apparently went by the also legally-changed name of "Kim Tim Jim Vestor". Uh....What?